If you only see one Football League match this season, make it Shrewsbury v Lincoln. It’s a marketing approach they could have used had the raging hyperbole not been so evident. However it is an accurate appraisal of this season’s tread, the beaten track being more keenly avoided than usual this term. Aside from a dreadful friendly at Preston and some cup action at Liverpool, Newcastle, Oldham and Sunderland, the league action among England’s professional classes has been unconsciously avoided. That is until now, and where better to come, as the spring sunshine peeks between the spread fingers of broken cloud like an unethical hide and seeker, than a Meadow. 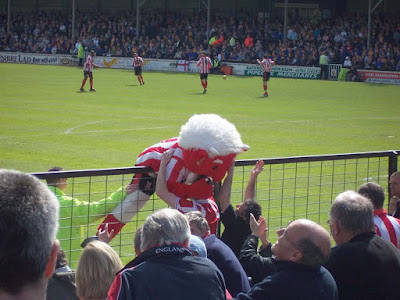 The great John Peel was schooled near to Shrewsbury and would watch the football team on occasion, but always retained his emotional tie to Liverpool FC. His son William Robert Anfield Ravenscroft often complained about his third given name but his Dad was always quick to point out how much worse it could have been if he’d been hooked in by the Shrews instead. If that had been the case, at least William would have legitimate cause for a deed-poll alteration next year, as a move to a ‘New Meadow’ is planned for summer 2007. For Shrewsbury supporters, to leave a charming, albeit old-fashioned, ground like Gay Meadow, only a couple of years prior to its centenary, will certainly not be easy even if most acknowledge that it is the only way for the club to progress.

Shrewsbury, on first glance, certainly doesn’t strike you as a footballing hotbed, and their recent year-long tour of duty in the Conference disguises the fact that twenty years ago they were regular top-half finishers in what is now the Championship. Aside from that, the place appears just too damn picturesque in itself for locals to pay too much attention to any game, beautiful or otherwise. Everywhere you turn, it looks magnificent; the many churches within the centre’s square mile, some with bells chiming into the bright afternoon; the chunky Abbey standing stoically; the Salvation Army band serenading those taking their lunch in the main shopping precinct; the Tudor buildings, little antique shops squeezed beneath their overhang; and the Severn winding through the town, famously bowing right past the football ground. Gorgeous stuff. 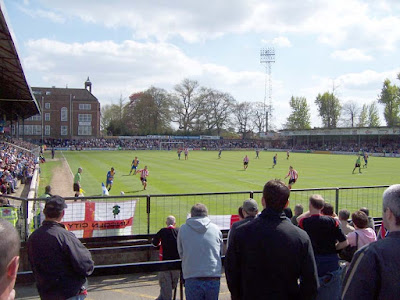 There are three libraries, each trying to out-ornate each other, Castle Gates possibly winning with its statue of Charles Darwin stood in its entrance garden. This building, built between 1594 and 1630, was the site of the old Shrewsbury school and was where the nation’s favourite evolutionist was educated. Not that he seems entirely pleased about it in his sculpted form, which captures in him an air of disgruntled camp. As he sits on a chair with papers resting on his crossed legs, his look is unmistakable, “I’ve read this f***** paragraph ten times, can’t you lot play outside” conveyed with dignified, but slightly prissy, silence.

Despite the town having many concessions to modern living, particularly in a standard array of shops, it assimilates almost seamlessly. It’s fairly cosmopolitan a place too, as around yet another corner, Unite Against Fascism are hosting a ‘Rock Against Racism’ festival, campaigning against BNP candidates fighting for council seats next week. A young steel band are working through ‘Hot Hot Hot’ as I approach, and with Shrewsbury and Lincoln shirts dotted amongst the onlookers, the concept of unity has yet another dimension added to it. Police are visible here, as they are outside the station, expecting a large Lincoln travelling support, but the atmosphere all around town is more than relaxed.

The Lincoln following is indeed plentiful today and I join them on the Station End terrace, albeit without the sombrero and Sanchez ‘tache that several have opted for. Part of the reason I am here is that Lincoln are part of my growing army of soft-spot sides, solely due to a former housemate of mine being a committed and native Imp. Today it is my turn not to just be a recipient of score texts, but to be a provider as, being a copper, he is working and expects to be grilling low-rent villains all day. 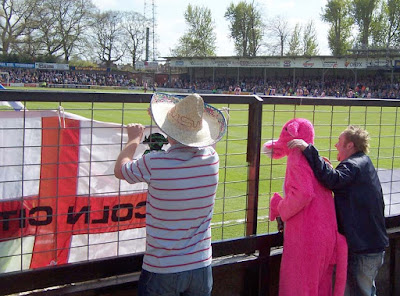 With two games of the season to go, Lincoln are currently hanging on to the final play-off spot, but with Peterborough, Darlington, Bristol Rovers and the Shrews themselves all swinging lassos around their heads behind them, two wins would be their only guarantee. They don’t make the best of starts with Shrewsbury having the best of the attacking play, unsurprisingly given they have opted for a 4-2-4 formation. They may have an outside chance of the play-offs themselves, and would require many results to go their way, but this makes Gary Peters’ intentions very clear. Mark Stallard and Jamie Tolley both go close in the first ten minutes and later Sagi Burton’s athletic overhead kick drops onto the top of the net.

In the face of this pressure, one Lincoln fan clearly tries to redress the balance by going down to the fence to goad Shrewsbury sub Gavin Cowan. He receives support from his mates further back on the terrace, “Tell him you’ve bummed his mum”, they instruct; “Oi 16, I’ve bummed your mum” he complies, lamb-like, and then engages in lengthy conversation with Cowan who bristles increasingly with just-about-restrained ire, although he appears quite amused by the presence of the Pink Panther who proceeds to add his own brand of banter to the exchange. Buoyed by this, Cowan foolishly accepts an offer of a reconciliatory handshake through the fence from our original gobshite but as he proffers his paw, Gobby withdraws his, placing his thumb to his nose and waggling his fingers. Not long after another unsuspecting Shrewsbury sub makes the same schoolboy error. Meanwhile, as the first period comes to a close, Lincoln have their best chance, Nat Brown nodding a foot wide of the post from a corner. 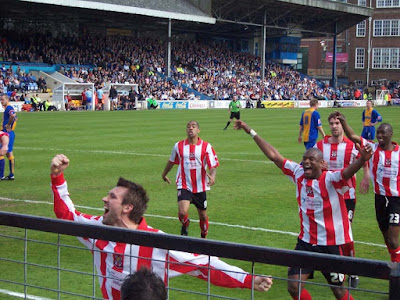 In the second half, Lincoln look much improved and more confident in dealing with Shrewsbury’s dervish fit of a formation, and on the hour take the lead. A free-kick floats in from the left, Gareth McAuley’s head arriving just before keeper Joe Hart’s fist, the ball dropping and ambling onto the net causing a joyous Imp surge towards their players who gather in front of and upon the fence. Somewhere in Lincolnshire, a tape comes to a close with the words “YYYYYYYYYEEEEEEEEESSSSSSS! COME ON! Oh, err, interview terminated at 16:22.”

News from around the country is also reaching those of us here and despite their own lead, the Lincoln fans are instead singing in celebration that, at Brisbane Road, it is “2-0, to the Orient”, Peterborough’s fortunes almost as important as their own today. In the final third of the game, Lincoln have to hold out against sustained Shrewsbury pressure, a succession of corners coming as the game approaches injury time, Joe Hart sprinting upfield twice to add to the bodies in the box. 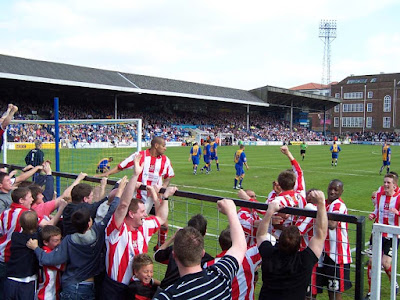 The last action sees a free-kick awarded to Shrews just outside the penalty area, Richard Hope bends down as though to re-place the ball but instead stubs it from between his hands to Neil Ashton whose shot speeds through the crowded box without touching a single limb and thus easily into the arms of Alan Marriott.

Upon the whistle the Lincoln fans celebrate wildly, knowing that with other results working handsomely in their favour, they only need a single point from their final game at home to Rochdale, who are no longer concerned about relegation, to get to the play-offs. It would be the fourth season in a row that Lincoln have made the play-offs, with two unhappy trips to Cardiff all too clear in the memory. Here’s to third time lucky.

good article that mate - made the Blue and Amber