It is times like these you have to work hard to avoid the temptation of following the vidi-printer blueprint and dust off the old parentheses. I know there’s plenty of completists out there though, that will be devastated and probably also unsatisfied with my use of the popular abbreviation of the home side. For those people,

Hope that settles you down. Moving on, I was reading the other day a thing about the one-sided games that occurred in the 1938 World Cup. Apparently one French reporter remarked after Sweden’s 8-0 mauling of Cuba, “Up to five goals is journalism. After that, its statistics.” Rest assured though, the lies and damned lies you’ve come to expect won’t be squeezed out but also be warned, this is going to be a long ‘un.

With most other leagues all tucked up in hollowed-out trees for summer hibernation, the North West Counties league still rocks along but, where one might have hoped for a gallop to the finish, FA restructuring announcements meant the removals business was tied up well ahead of time. It was confirmed that due to the league changes at Step 4 of the Pyramid, three clubs would be able to ascend from the NWCL and, once Nantwich Town had followed up their Vase win with only a draw two days later at Salford City, it became clear that Alsager, Skelmersdale and Cammell Laird would be those ascending, the latter two fighting it out for the title, Lairds a point behind with three games in hand, one of which being their season finale against relegated Stone Dominoes, gubbed 10-0 by Lairds in their prior fixture. Lairds will want the league won by then, and I imagine the Dominoes would favour that scenario too.

For Stone, and fellow descenders Formby, the door handle really has hit them in the arse on the way out, as a consequence of their demotion is that they will criss-cross on the NWCL’s escalators with the upwardly mobile FC United of Manchester. Not only relegation to cope with then, but also the lack of the unprecedented pay-day that North West Counties Divison Two sides have enjoyed this season courtesy FCUM’s massive, nose-thumbing support. With that in mind, and the shiny Vase in the trophy cabinet, you can imagine that Nantwich have coped better than might usually be expected when missing out on a promotion. 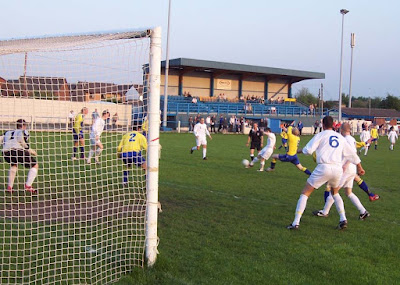 Atherton LR will also be breathing a huge sigh of relief, but in this case it is mainly that there were two teams even worse than them this term, considering their Runcorn-like upheaval, which has seen 61 players appearing in the yellow and blue, several heavy drubbings and 4 managerial changes (the original coaching team resigning because they felt that “not enough was being done behind the scenes of the club regarding the state of the pitch and fundraising towards the budget for players for next season”). Even more reason then to rub their hands with Fagin-esque glee at the prospect of the forthcoming luchre. The Manchester boys are good for a £12 advance too, as 3 fully kitted up FCUM followers turn up at the gate today, “checking out the competition for next year”. Considering Lairds will be off the radar by then, their scout report may well have taken the form of an old 78 of ‘The Laughing Policeman’.

Money is always an issue down in non-league though, and Atherton not only have to cope with nearby Wigan and Bolton, but also Atherton Collieries, who operate just about a mile away, and in the same division, effectively splitting the local football vote. The derby games would sugar that pill, if anyone bothered to turn up for them. A mere 76 checked in for the Easter Monday set-to, only 19 higher than their season average. They end the season today with their best attendance of the campaign. By one. I have my uses, y’see.

I am rather glad I did chose to come here too, rather than opting for the night in watching Middlesbrough fall at the last UEFA Cup hurdle. Fully justified by them brackets, I’d say, but how to sum up such a game? Well it’s not easy, but quite simply Lairds played like a team trying to guarantee their third successive league championship, and not like one resting on the laurels of a third succesive promotion, looking to make hay both while the sun shone and while it set.

Now Laburnum Rovers originally began as a boys club that grew eventually to County League level, where the geographic prefix was attached, since when they have peaked with an FA Vase semi-final appearance and a couple of Northern Premier League seasons in the nineties. This season, their 50th as a club, appears to have been like a regression, many of the players responding to Lairds graceful but aggressive onslaught in a manner akin to tugging on their own scrotums for comfort, their heads never dropping but often looking around with hastily dying excitement as though left behind in fairground car park by an absent minded auntie. 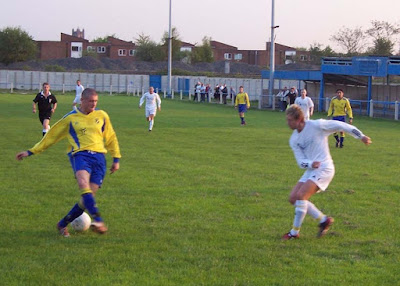 We impatient punters have to wait a whole eight minutes for our first goal. A corner floated in is watched lazily by the defenders, and by the Laird forwards, the ball hitting Lee Atherton and plonking in. Two minutes later, a brilliant dummy sets Ronnie Morgan free and, after playing a fortuitous one-two off a defender, he floats a sublime chip that dips in the slight gap between the keeper’s paw and the bar.

After 18 minutes it is three, Sakhi Idder has only to head the ball back about six feet, but manages only three, Anthony Hargreaves nipping in to flick the ball past the keeper, James McCoy making sure from two yards out. Behind the shed end, the Wigan to Manchester trains pass at a considered pace, as though rubbernecking Atherton’s drink-driving advert of a performance. A fourth goal, and a second for McCoy, follows on 33 minutes.

Four minutes prior to half time, Eddie Jebb twists, turns and undoes the LR defence like an oily zip, his show of trickery deserving several goals, but he fires at the keeper’s legs. A mesmerised LR defender clearly feels this to be unjust, kindly shinning the ball back to Jebb’s feet with one of which he slams it into the roof. Before remembering exactly who it was who supplied the final pass, the guilty defender yells “offside”. I imagine if he were ever to find himself locked out of his house in just his bath-towel, he would attempt to set fire to the towel, his embarrassment not so much covered here as it is layered.

Half time then. 5-0. So dominant are Lairds, each pass is another crack of the cat-o’-nine-tails on Atherton’s sweaty back. You know that panicky pirouette that players do when they’ve nodded the ball directly up in the air and aren’t sure where it is? Well, LR spend the entire game doing almost exactly that, regardless of where the ball is. Someone unaware of NWCL goings-on would certainly guess wrongly if asked which team had been playing once every two days for the best part of six weeks, and which had been able to recharge for a fortnight while waiting for their turn on the merry-go-round. Atherton expend much of their energy today arguing amongst themselves, but this aggression at least allows them to rally in the second half, forcing several decent chances during the course of the back forty-five. 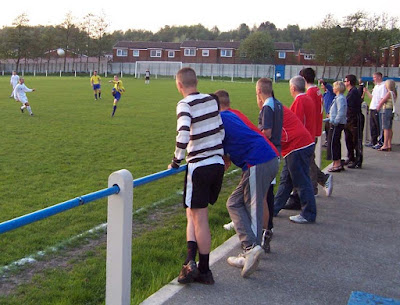 However, they still cannot cope at the back. After several near misses, James McCoy’s run down the left is cut down short just outside the box and just inside the byline. The free-kick is then arrogantly tapped in for Atherton (Lee) to flick into the top corner. The defensive wall was about three yards away at the time of the kick, but rather than this being a quickly taken effort, it was more a case of the ref seeing really no point in enforcing the full ten. Five minutes later, McCoy completes his treble, lifting it like a snooty prince over the keeper.

For the home-side there is probably no consolation in an ‘Atherton’ also bagging a hat-trick, but he does just that with quarter of an hour to go. A free-kick is floated in from the left, the Atherton defence following its progress like a baby spellbound by a soap-bubble, Athers nodding it in with a untroubled smile on his face. The ninth follows with seven minutes to go, substitute Bull latching onto a long through ball, beating a defence long gone sleepy bye-byes and the result is inevitable, a flick over the keeper into the roof of the net.

I’m not sure about delving into statistics, but when the LR physio walks past, asking me “is it 9 now?,” full confidence in one’s ability to follow a simple arithmetic progression seems far more pressing. “I think so, don’t quote me” I reply with all the held nerve of a press-feeding government mole with a sudden sniff of an unexpected promotion. The physio has just come around from attending to one of their strikers who, after receiving the ref’s signal to return to the field, shrugs with a resignation that suggests “Do I have to?”

In the 90th minute, the exciting Jebb goes on another mazy run, a la Maradona in ’86, but again his shot connects with legs. With that, the final whistle blows and “thank God for that” is the sigh from one LR supporter, but there are promises from the board that things will be different next year. The die-hards will hope so, as this defeat really could have been a whole lot worse.

So, for the first time in a long season, and at just the right time, Lairds sit atop the North West Counties League needing only a point from their final 3 fixtures. I had originally planned to follow them 2 days later to Salford City but I reckon a 9-0 is a more than decent way to complete a season’s tread. Plenty of windows have been peeked into on here since Rhyl last July, and I’ll wrap up some of the stories in the next few weeks as we await the World Cup.

I do a sports round up for one of the national broadcasters and was wondering if we could do a preview of it one week? Let me know what you think: roann.ghosh@mac.com

Nothing major it would just involve a phonecall and we could pick out what yr talking about that week on yr blog.