While geographic and civil boundaries may shift, county FA affiliations appear much more firm. The fact that this Lancashire Amateur Cup final is being contested by two teams from Merseyside would certainly suggest that shifting administrative borders do not lead to lapsed memberships. The losing semi-finalists, Rochdale St. Clements and Prestwich Heys, might have launched a legal challenge if it wasn’t for the fact that they both would count as Greater Manchester. Still, when you consider Hereford, Shrewsbury, South Liverpool and Crewe have all won the Welsh Cup in their history, I think we can let it pass.

It was an Aintree side, Aintree Church, which won the inaugural Lancs Amateur Cup in 1893/94, the Villa looking to put the name of their home town back on the honours board for the first time since then. Speke, on the other hand, have lifted this twice in the last six seasons, joining other fantastic names such as Bury Athenaeum, Ogdens Athletic, Florence Albion and Yorkshire Copper Tube on the winners list, the latter’s victory no doubt wilting any red roses within a ten mile radius.

The County Ground at Leyland acts as home for Lancashire cup finals and representative games as well as to Bolton Wanderers’ stiffs. It is attached to the Lancashire FA HQ like a plastic bib-tray to a dribbly infant, and is hemmed in by the Museum of Commercial Vehicles, Leyland being the Mecca for white van men across the nation. 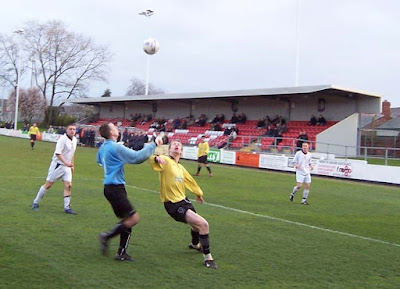 Both sides ply their trade at Step 7 of the National League pyramid, Speke in the Liverpool County Combination and Villa in the West Cheshire League (regional committees once again drawing up their geographical scope using a car boot sold Etch-A-Sketch). Ordinarily the tread doesn’t usually stoop to have a look at such levels but a cup’s a cup and a hard fought contest should be guaranteed, particularly with a load of Scouse doggers in the vicinity, err..., la, and such.

The start of the game suggests that the players have raised their standard for the showpiece occasion, Villa taking an early lead, a breakaway cross-pitch pass met by their no. 8 who curves a beauty over the keeper and into the far corner. Both defences then revert to more expected instincts, performing a series of experiments to determine the scientific merit of the ‘with snow on it’ theory.

Soon though, Villa are able to break away again, a corner falling to their No. 9, who looks 1 part Anders Limpar to 8 parts Miami Vice, who fires in low through bodies and into the bottom corner before running toward the Speke dugout, with whom he has had recent discourse, swearing like a sticky buttoned John-Lydon-In-My-Pocket.

“Don’t lose our discipline, they know who the better side is” bellows a Speke supporter behind the Aintree goal, “Two goals against the run of play.” To a certain extent he is right, and they attempt to impose themselves with both their superior passing along the surface and, in the case of their balding, stocky no. 9, a swiftly delivered tactical elbow to an opponents mush. It earns him a caution, the card being the shade his side’s diluted-urine coloured shirts probably were at the start of the season.

On 35 minutes, Speke finally get a deserved first goal through their number 8, who follows up an athletic diving save from the keeper. Nevertheless Aintree continue to work hard, and impress both a height advantage and an extra spring in their collective step upon Speke, Villa’s no. 5 being a particularly imposing beast of a man. They almost get a third as their no. 10 steps through a clumsy challenge from the goalkeeper only to hurtle the ball in direction of the hockey training going on within the adjacent all weather pitches. His keeper mutters “He’s been told a thousand times, GO DOWN!”, which roughly translates as “we have absolutely no faith in his ability,” although he may have a point.

6 minutes after their first goal, Speke fashion an equaliser, a free-kick given away by the lumbering no. 5 on the edge of the box curved deftly over the wall (see above) and into the top corner. Our gargantuan friend makes immediate amends at the other end getting the important body parts in amongst it after 2 goal-line clearances. As he trots back from restoring his side’s lead, the sweat on his proportionate arse-cheeks combined with the thinness of his white shorts reveal an intrepid thong beneath. Either that or his well-thatched behind could benefit from a Brazilian wax. 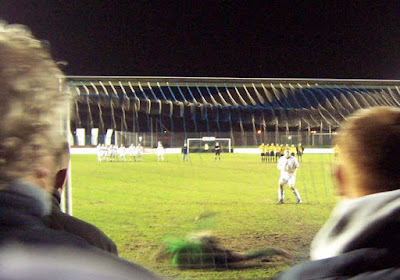 The second half sees the tempo of the game decrease but if anything having more time for contemplation ruins the Speke right-back’s game. Looking like little Barry Chuckle after a facial shovel beating, he examines the game as though it is a giant ball of tights he is required to unravel and consequently his passes go a little astray.

With less happening, one old boy absent-mindedly wanders between the dugouts to join a bemused 4th official. Soon after though Speke finally equalise for a second time, a shot hitting the diving keepers body and looping towards the net, a desperate defensive bunt helping it into the roof of the net. Out of the Speke dugout, the substitutes come flying, out of Aintree’s comes a bucket of water via their manager’s boot.

After 80 minutes, the simmering tensions boil over, a hard tackle causing a gathering of bodies, the Speke no. 9 raisings his hands and earning himself a straight red. “I never touched him” he says later, seemingly working to the idea that a haymaker which doesn’t connect was part and parcel of Charles Miller’s Corinthian vision. 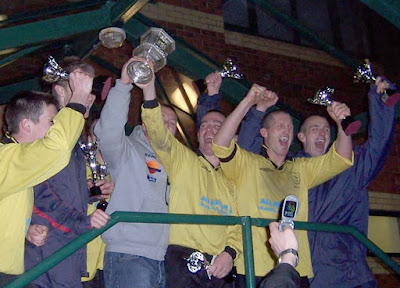 The game eventually winds down, via some contentious turned-down penalty appeals to extra-time, the short break allowing the Speke 10 to hurdle the hoardings and take a piss against the perimeter wall. During the 2 extra periods, the tired legs begin to show and the game continues to ebb and flow like an Ashes Test. Aintree’s manager continues to yell at his charges, the extension of the game causing his usually barking voice to whistle like a hob kettle. The tunnelled Speke 9 also finds plenty to shout about, appearing behind the goal to abuse the Villa 9, who he blames for his dismissal, “queer” and “shithouse” being among his kinder appraisals.

In the end, probably quite accurately, it takes a penalty shoot-out to separate the sides. Immediately before the 7th penalty, Aintree’s 4th, one chap whispers “He’ll miss this, I’ve got a feeling in my waters”, before disappearing in a cloud of smoke as the kick rebounds off the bar. It is the only penalty missed, Speke greeting their lifting of the cup with a chant of “We’ve won it three times.”

At least the people of Aintree have the National this weekend to occupy their thoughts and cover their disappointment. 112 years and counting…

So many great sentences / images, my favourite being the Speke right back "looking like little Barry Chuckle after a facial shovel beating"...

Great to read an account that provides some colour to the most soul-less ground in the country (though I must admit I haven't yet visited Stadium:MK, nor do I intend to...)