My decision-making has always been a little shoddy. When given the choice of seeing Oasis at the 400 capacity Wedgewood Rooms, Portsmouth in 1994, or Terrorvision at the Pyramids (with room for a thousand), I opted for the latter. There will be some out there who may think I did well out of that decision but, like the Gallaghers or not, my choice doesn’t make for such a great boast 12 years on. I knew someone who was able to say they ended up at a friend’s flat with Liam Gallagher who had been lured there on the fake premise that a party was occurring. How much this has been embellished, if at all, I am not certain, but it certainly beats “err, got a poster signed by Shutty” as a winning anecdote.

Now, Nantwich is just next door to Crewe. Where many trains stop. Not so many stop at Nantwich, so faced with an hour wait at dour old Crewe station, I gambled that the spots of rain would not get any heavier and thought I’d take a stroll. One hour and four miles later, my outer layer now 4 parts water to 1 parts coat, I popped into the Leopard pub to steam up their windows like a boiling pan of vests. Like I say, if you are faced with more than a single option about anything, do not seek my counsel. 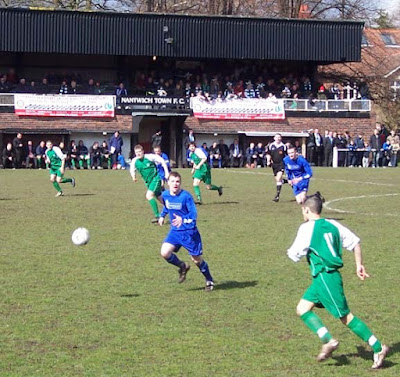 Already in the Leopard were the Nantwich jolly boys seen the previous weekend rolling en masse through a Wirral turnstile, and not long after we were soon joined by the travellers just arrived on the Lairds party bus. They had hired not only a coach for their quieter supporters, but a double decker bus for, essentially, their noisy drunks, although considering the behaviour I have seen from their hardcore thus far, I would guess this was more a stray chunk of coronation chicken on your trousers than chunder on the dancefloor.

The Leopard occupies a special place in the hearts of Nantwich Town fans, as does their ground 100 yards up the road. Jackson Avenue has been Nantwich’s home since their formation in 1884, the pub in those days also acting as a changing room for the players. Liverpool’s first ever FA Cup tie was played here 8 years later, while 5000 squeezed in the place in 1921 for a Cheshire Cup tie against Winsford. However this is likely to be Jackson Avenue’s final full season and it does look a little ramshackle, not helped by the four-seasons-in-one-day nature of the weather. It is currently good enough though to host Northern Premier League football, but it is clear they have their hearts set on providing a more modern facility at Kingsley Fields, slightly nearer the town centre.

So after 122 years, it hosts a national semi-final 2nd leg with the home-team excellently placed to make it to St Andrews on May 6th. Cammell Laird, having achieved a 2-0 double over Nantwich in the league, will of course fancy themselves to over-turn the one goal deficit from the first leg, although a mid-week league defeat in between at the hands of Ramsbottom United may have put a dent in their confidence not only for this game but for their league campaign which requires them to play a further 16 games in the next 4 weeks. 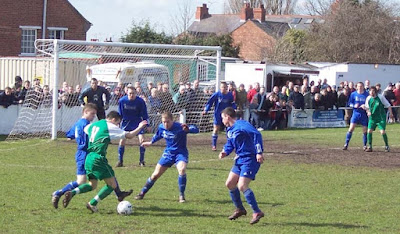 As the crowds slowly gather (too slowly as it happens; requiring a 10-minute delay due to congestion at the two turnstiles) the Nantwich keepers warm up together; understudy Danny Reade hammering shots at No. 1 Rob Hackney. One fizzer flies over the bar and drops to catch one of the ladies collecting with a bucket for a local hospice on her ankle. As she bends down to give her Achilles a rub, Reade’s next shot thunders off the bar, flipping over to land on her back. The sound of the giggling that is coming from the children stood nearby is only slightly louder than that coming from the keepers.

The start of the game is explosive, Nantwich, perhaps surprisingly making the initial attempts, the defensive option only taking them so far, I guess. A decent penalty shout is turned down in the first minute while one shot sails just over in the second, however it is Cammell Laird who have the best early chance, Ronnie Morgan squaring to Carl Clampitt who smacks he ball against the bar, Morgan’s follow-up sidefoot requiring Nantwich player-boss Steve Davis to clear up on the goal-line. It is abundantly clear that Nantwich aim to continue their solid defensive display from the first leg; one hoofed clearance breaking a branch off a nearby tree.

However rather than being their only game plan, it is merely the sponge for a particularly fruity counter-attacking flan and as early as the 20th minute, The Dabbers increase their aggregate lead, but mainly thanks to some Keystone Kops interplay between the Lairds Johns, keeper Gillies and centre-back Collins. After a ball loops over Collins’ shoulder and between the two, neither commits to taking command of the ball and they manage only to take each other out, Andy Kinsey dancing easily through the somersaulting defender’s limbs to slot home. 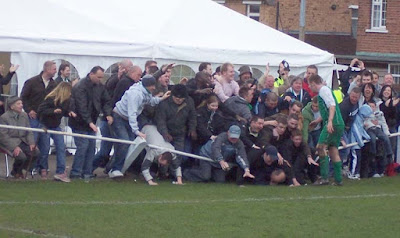 This is all to much excitement for the Nantwich jolly boys who surge forward and cause a section of the perimeter bar, one fence post and a balding late-middle-age gent to collapse under their weight. It is clear though that not all of those in the pile are there courtesy a loss of balance. For the top layers it is almost certainly a playground shout of “BUNNNNNDLLLLLEE” unlocking itself from their inner time capsule like an assembly fart. Thankfully young Mr Grace, sat rather unperturbed by it all just further to the left, doesn’t sail head-first into the muddy turf with them. The skills with which Kinsey avoided Collins’ hapless cartwheels are put to use again as he executes a shuffly moonwalk to move beyond the reach of the cascading Nantwich support.

Once the ref has established that the fencing can be made safe, the game restarts but the surface is not exactly conducive to Laird’s style of quick pass and move football. With players arguing amongst themselves and a two-goal deficit, things don’t look good despite their long periods of possession. Things get a lot worse on the stroke of half-time, Matt Blake’s change of pace down the right flank allowing a penetrative cross bending toward the 6-yard line that Adam Beasley stoops to meet and guide between Gillies’ fingers and the near post. 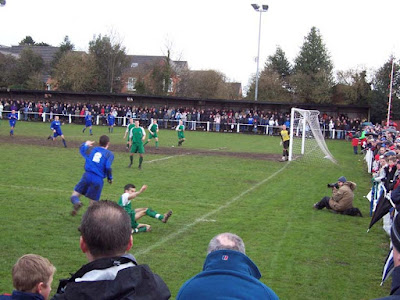 For the second half, requiring 3 goals just to take the tie to extra-time, Lairds cannot up the tempo sufficiently. At a time when they require as much heart as an AOR buff’s record collection they are distinctly shoegaze in their mannerisms, seeming resigned to their fate on a treacle tart of a pitch. Again they have plenty of possession but have little clue how to break down an impressively strong and focused Nantwich side.

As the clock ticks closer to the final whistle, Nantwich are able to exploit Lairds collective ennui and wrap things up in style. They are even able to bring on their surprise special guest dignitary/substitute Jimmy Quinn (ex Reading and Swindon gaffer) who, at 46 and a half, is really beyond the term ‘veteran’ now and possibly closer to ‘touring exhibit’. He replaces Steve Davis with ten minutes to go just before any doubts are killed off with Kinsey’s second goal, another calm finish after rounding the defence. 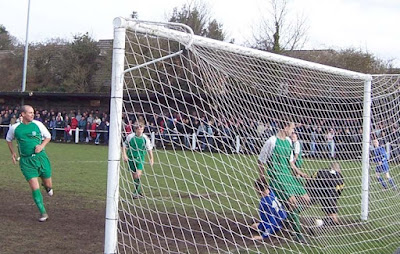 Lairds bundle the ball in the net after 87 minutes, although keeper Rob Hackney has hold of it at the time, and thus the last drop of passion drips from their play, upon which Nantwich take the piss by scoring a 4th with almost the last kick, Stuart Schueber neatly lobbing the ball from the edge of the area over Gillies and into the centre of the net. The Dabbers roar on the final whistle at the thought of their forthcoming FA final. I bet some of them are thinking, though, “if only Wembley had been rebuilt on time”. Either way, on this showing they will be excellent representatives of the North West Counties League in the final against Hillingdon Borough, and I’d fancy them to win it. Then again, I thought Cammell Laird would win this semi. Like I say about my choices; put your house on Hillingdon.

Cammell Laird currently look a different side to the one that took my breath away against Abbey Hey. They are understandably tired, but if this is how they feel now with so many games to play, unless the plan to expand the Unibond Northern Premier goes ahead next season after all, Lairds may not have the character to take them there as champions, as may well be required. It is still in their hands but, particularly after this morale blow, is it in their legs?