With only 2 weeks to go of the Conference South season, things remain a little complicated. Regular readers may remember me mentioning that Havant & Waterlooville got into a bit of trouble back in January for playing Tony Taggart in a match against his former club Weymouth despite giving assurances in writing to them that we would not. This is not an issue of ineligibility, as his contract had been terminated at Weymouth on the basis of said agreement, rather ungentlemanly conduct. Or bringing the Conference into disrepute. Or something. Which was the trouble as nobody, least of all the Conference, really knew what to do about it. No league rules had been broken as such but, and many H&W fans would agree with this, a slap on the wrist of some kind was probably fair.

The Conference’s original ruling was nothing if not revolutionary. They stated that the match should be replayed under cup conditions. We appealed to the FA with regards procedural matters in the hearing, and they ruled that the Conference should re-examine the case. Eventually they got around to doing so, changing their decision to a thousand quid fine and a 3 point deduction. We then had two weeks to appeal the decision, and we have duly done so. This leaves a fortnight left of the season with all matters still up in the air. The outcome, of course, affects not only us, but also those immediately beneath as, prior to the Easter weekend, we sat in 5th at the bottom of the play-off spots, with both Welling United and Cambridge City snapping at our heels 5 points behind, 2 if you’re one of those table compilers that’s already chalked off the rewards from our Weymouth win.

As such the onus has been very much on the Hawks overcoming their stuttering, inconsistent performances of late, and making sure of a play-off berth regardless of any upheld deduction. With a re-arranged trip to Cambridge in the final week, as well as our hosting of title contenders St. Albans City next Saturday, we very much needed to make the best of the Easter double-header. 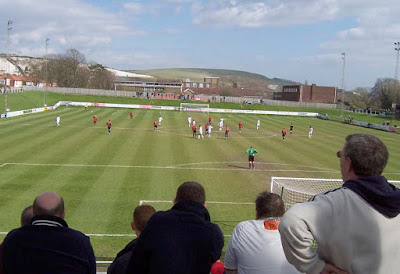 It didn’t exactly get off to the best of starts; a rare 2-1 home defeat to Thurrock managing to increase the heavy gloom on a grey, drizzly Saturday at West Leigh Park. Thurrock were first to every ball despite having nothing to play for, and we never looked like winning after Neil Champion’s own goal gifted Thurrock an early lead. Carl Wilson-Denis’ scuffed effort that crept in off the post after 68 minutes briefly lifted the spirits, but in truth we looked too lethargic to be considered worthy of taking anything from the game.

As such we found ourselves travelling to Lewes with nerves even further frayed but still it was a train beano along the South Coast and, while the big day out usually spells certain defeat, it was just the shot of fun in the arm that I so desperately needed after recent off-field frustrations. Couple of pubs, Spurs v Man U on the telly and then a nice stroll to the Dripping Pan through the quiet town centre for the main game of the day. Just the ticket.

Lewes’ ground is certainly an oddity as the pitch sits in its own little valley, surrounded by banking on all four sides, although one has been dug into with the changing rooms/social club building and, more recently, a steepish bank of terracing with a designer roof. The Dripping Pan, though, is much less Lewes’ Theatre of Dreams, and more its shabby outhouse basin of frustrated ambition for which, however, they only have themselves to blame. Despite the terracing, and some seating on top of one of the side banks, it betrays the fact that they ascended from the old Isthmian 3rd Division to the Conference South in little over 3 years, an opportune Division One (South) win in 2004 just prior to the step 2 re-jig allowing an instant 2-tier promotion. It is no surprise then that the Pan doesn’t even come close to meeting the requirements for hosting Conference National football. As a result, should they finish between 2nd and 5th, they will not be allowed to compete in the play-off semis, giving the highest placed side a bye to the final, and essentially robbing another sufficiently graded side of the opportunity.

It is not as though they haven’t had fair warning, as exactly the same thing happened at the end of last season, but rather than bring their ground up to standard to prevent such a case again, they seem to prefer pumping loads of cash at players of calibre to bring them the kind of on-field success upon which they cannot truly capitalise. With the further prospect of demotion from the Conference South if adequate changes aren’t made by this time next year, Lewes really do need to face up to the fact that, however proficient they might be at treading water, the prospect of retrieving the plastic brick from the bottom of the pool in their pyjamas is just not going to go away. In fairness though, Lewes District Council, them so beloved of Brighton & Hove Albion FC, have attached concrete boots to their efforts by not allowing the essential removal of a flint wall to aid ground improvements.

With sunshine lighting up the sunken surface, a slight breeze sweeping towards the open end and the occasional child rolling down the banking like a Cooper’s Hill cheese, the Hawks got straight to it, looking steely and determined, Guy Lopez returning to a side that missed his energetic midfield grit on Saturday. All those around him, even the much maligned (on these pages at least) Fitzroy Simpson, were also getting amongst it, our central defensive partnership of Tom Jordan and Neil Sharp looking particularly solid. For all our attacking, though, we only had one goal to show for it going into half time, and could perhaps be said to be fortunate for that, Rocky Baptiste tucking away a penalty given for reasons unknown to most in the ground.

Still, there was plenty to be confident about, even if we were lacking the second goal that would kill it. The Hawks were not quite so efficient in the second half, Carl Windsor Davies particularly struggling to find his feet in the stiffening breeze. As a result, Richard Pacquette was brought on to intimidate the Lewes back four with his gigantic rump and this seemed to work, as a dreadful mix-up late in the game saw him one on one with whiney, and pretty ropey, Lewes keeper Paul Wilkerson, his powerful sweep placed neatly beneath the keeper’s dive.

As the victory jive commenced high above the goal, and several Hawks cascaded down the bank, Pacquette sauntered towards us, dropping to his dinner-plate-sized knee as though preparing to belt out Rene & Renata’s “Save Your Love”, but instead miming a bow and arrow which, call me paranoid if you like, appears to be directed squarely at my swede. I would have taken this as protest at my recent descriptions of his startling rear-end jut, were it not for the fact that the breadth of his mime suggested that his weapon of choice was a Cupid-sized version. This could be the beginning of something beautiful, folks.

Not long after, the PA crackled into life to reveal the Lewes man of the match as Paul Wilkerson, an announcement that caused the entire away support to double up with sweet harmonious laughter, which certainly made for a pleasing contrast with the atmosphere here last year. 14 months ago we were bottom of the Conference South and had capitulated in pathetic style here at the Pan, with some of our irate fans apparently almost coming to blows with players as they left the field.

This year we went round to applaud them off after their warm-down, having serenaded them almost without taking breath for the final ten minutes and beyond the final whistle, through their post-match huddle. An impressive win AND a clean sheet AND smiles all round. Magic. At this rate, and with St Albans losing the 1st v 2nd battle with Weymouth today, leaving them possibly demoralised ahead of our Saturday fixture with them, it may indeed be our playing staff, rather than our legal team, that makes sure we make these play-offs. As I left for my train back to Liverpool I told my brethren, “I’ll see you at Stevenage for the final”.

At this stage, I can't do anything but.