So I’m in London for my birthday weekend, right, but the question is, how do you adequately celebrate your non-milestone 28th? For me it meant Indian food, finally getting to see my chums Autons play a live gig, dancing into the night at a quasi-miserablist club and attending a screening of a 1913 Expressionist film with live piano accompaniment. I would add football to that list but, as you’ll be aware by now, I don’t use that as a marker of another year passed. Another week, yes! I’m quite the hedonist really. 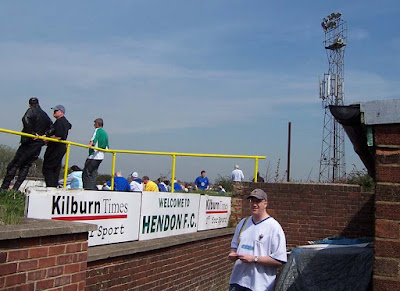 The London option was made much more viable and, more importantly, affordable by my lovely lady friend’s placement, for work purposes, in a Farringdon flat. However nice and central it may be, though, to spend a weekend there, you become acutely aware of one sage old soundbite; there really is no place like home. Sadly, on the Sunday, the clicking heels option for the instant return wasn’t available on a Virgin Saver ticket; I think young Dorothy may have acquiesced to knocking about permenantly in Oz if the only other option was a standing-room only Pendolino.

My brief football excursion up the Northern line, amongst my attempts to look debonair, brought me into brief contact with two sets of supporters who would certainly empathise wholeheartedly with my pigeon-like instinct. Wimbledon fans spent the best part of a decade, after moving out of Plough Lane and into a tenancy agreement with Crystal Palace, campaigning that it was “time we had a home game”, before new owners decided that ‘home’ should be over 60 miles away and, eventually, in new colours and with a different name. Yada yada yada, AFC Wimbledon were formed in 2002 and have ascended from the Combined Counties League and now find themselves challenging for a play-off place that could potentially see them into the Conference South. 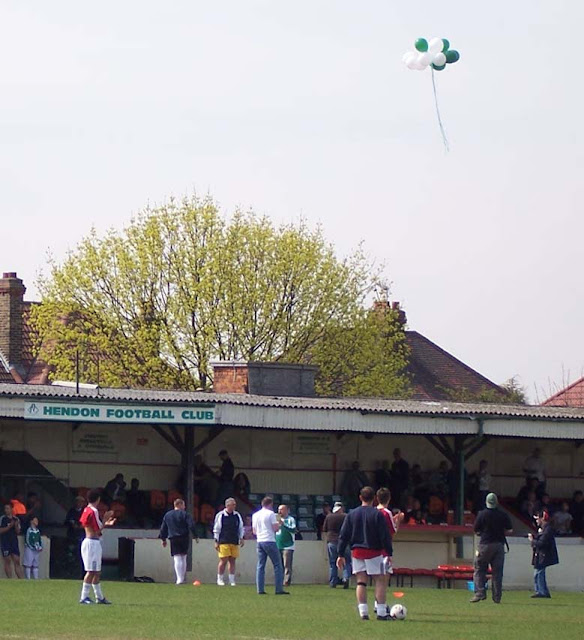 That AFC have not made sure of their spot already is far from the ideal scenario for Hendon who themselves require the points in more trying circumstances. While three teams have already been directly relegated from the Ryman Premier, there remains a stealthy dotted line caveat that exists just above the zone in the 3 Conference feeders and, as such, the Lambs find themselves in a linear scuffle to avoid a single extra relegation with those similarly placed in the other two step 3 leagues. This entails that Hendon’s worried glances should flick not only upwards to those within reach in their own division, but also across at the points tallies of the likes of Lincoln United and Wakefield & Emley in the Northern Premier and Northwood in the Southern League.

If this was the only thing to currently concern Hendon, I’m sure they’d be coping slightly better as the possibility remains that they might not have a team at all next season. One thing that seems for certain is that they will not be playing here at Claremont Road, where they have been in situ since 1926, as owners the Arbiter Group have decided, upon the death of company chairman Ivor Arbiter, that they can no longer fund the club and, as such, the ground is being sold for housing. Today, then, sees the last game that will be played at Claremont Road. A move to the Copthall Athletics Stadium has been vetoed, although the possibilities of mergers or amalgamations remain. A Supporter’s Trust has been set up to work alongside current vice-chairman, former 10,000 metre world record holder and wearer of a triumphantly colossal moustache, Dave Bedford in securing some kind of future for Hendon. 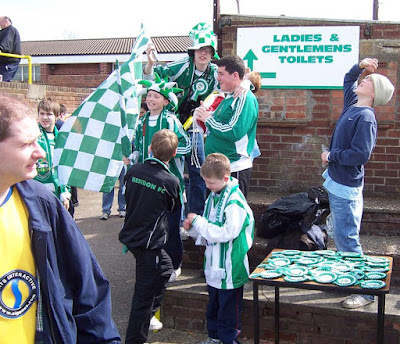 With all this up in the air, the first priority is to cement the top-tier status they have held since they joined the Isthmian League from the Athenian in 1963. They have run relegation close on several occasions in that time, no more so than with a final day 4-1 victory over Slough 20 years ago. It appears they are trying to invoke the spirit of that era as a good luck charm today as, prior to kick-off, the PA spits out a school-disco of 80’s hits such as ‘Easy Lover’, ‘Don’t You Want Me’ and ‘Don’t Leave Me This Way’, the poignancy of which appears deliberate as when we do finally move on to the music of the 1990’s, it is with REM’s ‘Everybody Hurts’. With souvenir rosettes on sale and a poetic homage to the ground pinned, seemingly unsolicited, to the outer walls of the toilets, the tactic today is evidently to squeeze out every last drop, rather than wallow all summer. Bruce Hornsby laissez-fairing with the suggestion that “that’s just the way it is” doesn’t quite capture the mood of the occasion, particularly in the insinuation that “some things will never change,” when, quite clearly, sometimes too many changes can occur at once.

Their support is certainly mobilised though, the Supporters Trust gathering cash and names outside the club shop while, inside, they are having a sale in advance of having to box things up. A ceramic lamb mascot is clearly already getting in the way and has been swept aside so as to seemingly be facing the naughty corner and, therefore, in looking sheepish, succeeds on more than one level. Before you reel in horror at the outrageous pun, bear in mind that this is merely a reflection of the fact that the chap walking round the ground in full woolly costume, barely succeeds on any level. Despite this he still manages get a load of coinage thrown in his bucket, making the most of the imposing size of the visiting support, who themselves include one chap seemingly a day early for his London Marathon entry, taking on the spring sunshine by turning up amongst the shirtsleeves in a gorilla outfit. 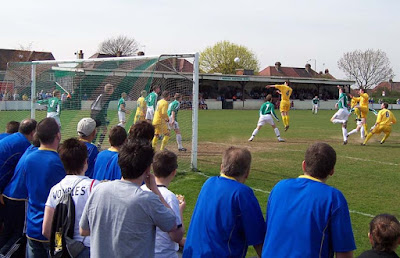 Considering AFC are currently managed by ex-Hendon gaffer Dave Anderson; exist as the result of a supporters’ initiative; and take at least 1500 to most league away games, Hendon Supporter’s Trust couldn’t have chosen a better time for their launch as they have a large and empathic captive audience for their symbolic, but unostentatious, release of green and white balloons. The Dons arrival en masse is certainly fitting for Claremont Road’s last hurrah and, as a result, money flies from all sides in the direction of the charity bins but the last remaining 50/50 draw ticket still requires the hard sell from one lady sounding exhausted and exasperated by her sales drive; “C’mon, you’ve been where we are. Bin it, eat it, wipe your arse on it if you want, just give us yer money.” In the world of marketing, you really can’t beat that feminine touch.

For all the benefits of a big crowd, the script was never going to be that perfectly written, as it is AFC who win the game, despite playing all of the second half with 10 men after Scott Curley’s 45th minute dismissal for planting an elbow on Andy Cook. Richard Butler scores their winner, in the 59th minute and against the run of second half play, polishing off a pinpoint pass by sliding the ball beneath keeper Rikki Banks. Prior to that point, in the face of Hendon’s much improved display, the Dons support had been singing that Milton Keynes “is full of shit”, but upon the goal, spirits are lifted to the point that they spend the next 10 minutes solid singing their goal scorer’s name. 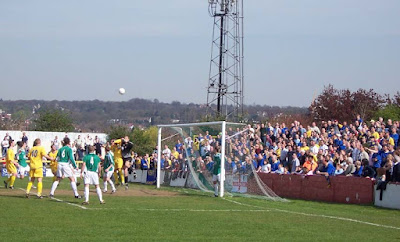 It is a gutting moment for the demotion and demolition haunted Lambs, particularly after their hard first half work in the face of AFC pressure which saw Banks make several fine saves. Aside from one cross-goal flash that avoids both defensive and offensive out-stretched limbs, Hendon don’t look like getting anything out of the game after the goal, their day neatly summed up during a break in play when a substitute’s attempt to skid a water bottle to Rikki Banks sees the lid wind off and the contents spill out, an enthusiastic “’R-rrrraaaayyyy” immediately lifting from the far terrace.

So, as it stands, AFC Wimbledon leave Claremont Road behind assured of their place in the play-offs in which they could play Heybridge Swifts, currently home to ex-H&W man Dean Holdsworth. Considering he played for ‘Wimbledon’ in their first games at Milton Keynes, as well as more successfully in the immediate post-Crazy Gang era, it would be interesting to see what the reaction to him would be. Hendon, meanwhile, leave home still looking across the parallel divisions, and after this defeat, they know it is out of their hands, a win away at Margate on final day next week would still require results in two unfamiliar leagues to go their way.

When you said you'd got your Hobo stuff done on the journey home, I didn't realise you meant a match report - hadn't even realised that's where you'd been on Saturday afternoon! You really are an incorrigible ground-hopper. Hendon - nice and convenient though, eh?

And shame on you for failing to mention that it was your birthday! (Or maybe you did, and I've just forgotten amidst the ensuing alcoholic haze...)

I'm not one to make a big fuss about the birthday but, yeah, I am always keen to fill my time with some football somewhere. Shame H&W weren't playing St. Albans away that day really, rather than at home. Still, was keen to salute another passing home of football before it turns into another housing estate.

I try to downplay the 'g-h' word but, I guess, resistance is futile in the face of such overwhelming evidence, which I have provided myself in list form.

Shame to hear of HFC's plight- I used to live a ten minute walk from Claremont Road when a student in London, and watched quite a few of their games in the late 90s, when they were near the top of the old Ryman League.

Here's hoping they can get something sorted out. On a brighter note, skif, you'll be pleased to hear that Gable End Graffiti is re-launching in the next few weeks- new address http://gableendgraffiti.blogspot.com I'll keep you posted.

Hope to see you up at LP next season!