I would spend ages discussing the usual bits about the 'home' town and club but the Glossop experience has been already more than adequately noted by our friend Jonathan Crinklybee in two postings from earlier this season, when they took on Romulus in a high-scoring FA Vase game. It's in two parts, part 1 here and part 2 here. While you're about it, you should also check out his latest brief article that describes a visit to Dunston Federation Brewery. Anyway, back to tonight's game at Surrey Street.

In the first half, a rotated Lairds squad look bright of mind, but slow in body, as might be expected of a side playing games virtually every other day for the last 6 weeks of the season. Thankfully for them, the North West Counties League has extended its season to cater for its clubs that have been either more successful in the cups or poor in the drainage. As such they have games running through until May 15th. 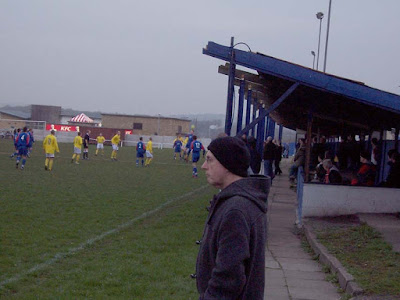 Despite this, and that games are less prone to postponement now the spring weather is showing itself, the going on bobbly pitches like the one here at Glossop will sap the legs somewhat, and while not as technically proficient, the home side are able to exploit this by upping the work-rate amongst their less wearied players. Their efforts are rewarded in the 28th minute as Sam Hind polishes off a nod across goal. Word is clearly spreading round the neighbourhood of this lead as two chaps take advantage of the low-ish wall near the turnstile to peer Kilroy-like at the action, or possibly to check on the feasibility of breaking into adjacently parked cars.

Lairds have every reason to be nervous at this point, and not just because their team bus is parked right outside, as while they are still several games behind Alsager and Skelmersdale, some of their catch-up fixtures have not gone to plan, a 0-0 draw with Trafford, a 2-1 defeat at home to Bacup Borough and yet another postponement coming in the week prior to this game. It is therefore unsurprising that Lairds manager Ian Doran isn’t cutting his charges any slack, screaming “Don’t get lazy on me” as though having just perched on a window sill laden with net-curtain disguised cacti. It does the trick as on the stroke of half time, Jamie McGuire latching onto a long ball over the defence and exquisitely lobbing keeper Stuart Williams with a single touch. However, Lairds cannot sit on their equaliser and go in knowing that they will have to push for victory after the break. Doran will certainly be on their case if they take their foot off the pedal. 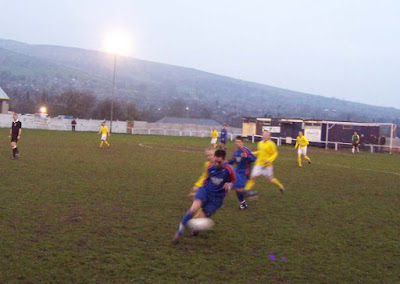 It is easy to get distracted at this stage of the season though, particularly when the pitch gets a regular visit from a duck at the start of the second period. He ambles around the Glossop half for a while before, like the home side’s defence, he gets caught out by Cammell Laird’s pacey and penetrative runs, quacking with a hint of panic and flying off, muttering “of course, you realise, this means war” through a pursed bill. He returns later, seemingly avoiding the pun potential of a quick trip up the road to Dukinfield, and once again plays his own game of dare in the face of increasingly productive Wirralian limbs. Others in the past week have suggested as to what this blog would have made of ‘the Highbury squirrel’. I really don’t know what they mean.

Despite the diversion, Lairds’ class eventually spills out and their undoubted passing abilities get them their lead in the 61st minute. Lairds have had 3 decent penalty shouts during the game and this was perhaps the softest of the lot as, with the long ball bounces and sails over them both, Stuart Williams collides with Chris McGinn, Jamie McGuire scoring his second of the night from the spot. That he should be penalised is harsh on Williams who has a pretty decent game, making several vital blocks and saves.

Glossop attempt to push on for an equaliser and, for a short time look good for it; one corner curling in towards the centre of goal before Lairds keeper Leon Bimpson athletically bats it away like a table tennis junior champ trying to impress his best friend’s attractive cousin. It is a short-lived fight-back as Lairds seal it in the 84th minute, McGuire completing his hat-trick with an easy close-range header, his 39th goal of the season which takes him to within 4 of club, and league, top scorer Ronnie Morgan. 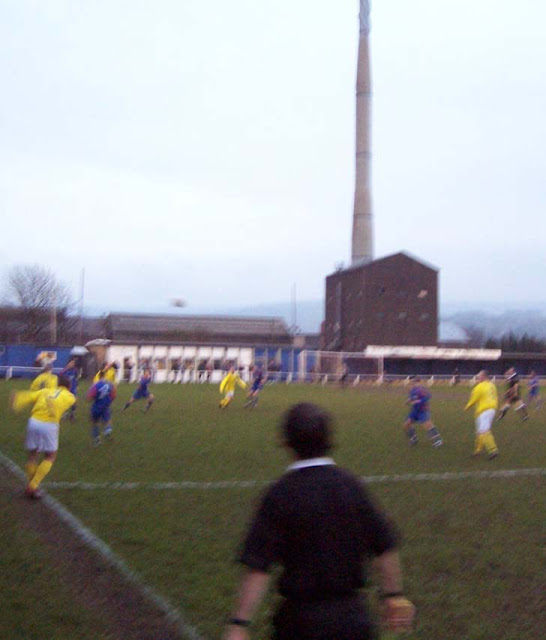 At this point, to be sure of my train home, I am on the edge of the Peak District and needing to get back to Liverpool after all, I scoot and thus miss the icing on the cake that is Mike Rimmer’s final minute effort of which I can tell you precisely nothing. Apologies, the hobo doesn’t like to miss anything, but when nights on cold, desolate Derbyshire railway stations somehow manage not to appeal, there is little choice.

So, as it stands, Lairds are 6 games behind Skelmersdale and Alsager, with 10 and 9 points separating respectively. Still, it is theirs for the taking. The top 3 may yet all go up but until that is made clear, the top spot is all important.

A duck? After a cat, a squirrel and a pigeon? What next?

I'm suspecting there may be someone who owns a menagerie of animals and is selectively releasing them one by one onto football pitches around the country.

You may be right. I should avoid this man, I'm turning into the Henry Blofeld of non-league writing.

It was all I could do at Hendon to avoid mentioning "Oh, and as a big red bus trundles behind the main stand, ..."

Soon I too will start writing about wine and have a cult following in New Zealand.