As the people of Liverpool would tell you, (the) Wirral is not Liverpool. The people of (the) Wirral have yet to fully work out whether or not this would be a compliment. Caught between the rough-edged nature of the big city, its own northern coastline flanked with the scarrings of heavy industry, and the slightly more ornate Roman city of Chester, (the) Wirral fights against its ‘little brother’ aura from within.

Of course, being based in the ‘Pool, today presented an opportunity to travel to a game by boat. Apparently there is one that occasionally drifts across this river. In the end though, having seen both sides from the other, the opportunity to see both while swaying on water browner than Jonathon Ross’ handkerchief holds only so much appeal. Besides, I need to get to Rock Ferry which, despite its name, doesn’t have one.

Besides, much as I love the watersports, it has all been done before. Being a non-league fan, you get resigned to the fact that you will never see your team play in Europe. Mind you, those hardy borderers who rocked up to watch Gretna in the Unibond Northern Premier League until about this time 4 years ago might now suggest that where there is life, and maybe a bearded, chain-smoking millionaire philanthropist, there is hope. I imagine Havant & Waterlooville’s request for election to the Scottish League might falter in the logistics though, but if anyone does wish to throw cash at the H&W, like gunge at a CBBC game show contestant, then I’m sure our board could make room in their schedule, but I’ve slipped way off track here. 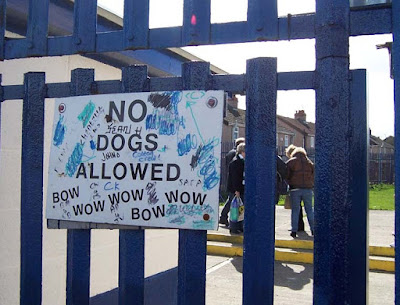 Knowing you’ll never board a chartered plane bound for Estonia is possibly the only reason those in the English pyramid would envy their former colleagues, like Rhyl and Bangor, now plying their trade in the League of Wales. So, you have to make do with what you have and, luckily, my club’s former ‘deadliest rivals’, before Weymouth rapped a driving glove around our chops (or we theirs) were Newport (Isle of Wight). For one season, they joined us in the old Southern League Premier Division, gamely leaving their inevitable relegation until the last day, which caused much mirth on the Cambridge City terraces for a number of pissed-up Hawks who had established communication with those sat at home in front of Teletext.

Since then Newport (IoW) have plummeted down the divisions and now face demotion to the county leagues, the rivalry long since forgotten. It was great for that season though, particularly as Newport’s manager, Tony Mount, had left the pre-merger Havant Town in some acrimony a few seasons before, and took most of the squad with him. There was a song about him being captain of a ship, that ship being an oil tanker, with which some elementary rhyming was attempted, you get the picture. Anyway, to cut a long story short, the best bit of this rivalry was in the getting to their place. Trains we are used to. Buses? Once in a while. Very rarely a catamaran though. All three? Well, we felt just a little bit spoilt, in truth. That evening, we came back with 3 points, an unprovoked punch in the face for one of our number (the one sour point) and the knowledge that we had shared half the sea journey with the, now sadly deceased, Michael Sheard (aka Mr Bronson from Grange Hill). It was all I could do not to yell ‘KENNNNNN-DALLLLLLLL’ below deck. And people wonder why I quit drinking. 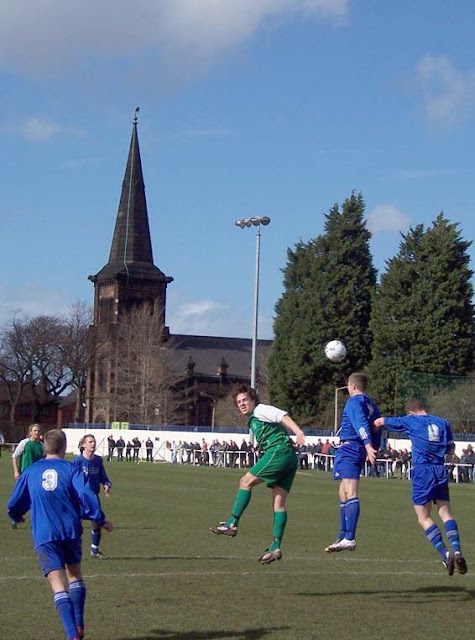 So, as I say, no need for the ferry today, instead a nice, quick trip on the Merseyrail. At Rock Ferry station, you have a choice. Go right and you’re heading in the general direction of Prenton Park, home of Tranmere. Turn left and you’re heading towards the old Cammell Laird shipyards. These are two of the figurehead Wirral institutions and it is fitting that if one club from the area should get themselves noticed on a national scale, aside from Rovers, it should be the team, founded in 1907, that grew out of the Dockers XI.

Only in their second season in the North West Counties set-up, Lairds had previously won 19 out of the previous 35 West Cheshire League titles, and ran away with the Second Division Championship and Trophy, as well as the League Challenge Cup, a first for a second tier side. They have kept it going this season, reaching the final of the Challenge Cup again, as well as the FA Cup’s 3rd Qualifying Round, and remain, as you’ll have read on these pages, in contention for the League Championship, although only if they can maintain standards through an intense backlog. The North West Counties League has extended their season by a week to cater for clubs in a similar position to Lairds. Clubs like Nantwich Town who, obviously, have had quite a decent cup season of their own. The benefit of that extra week will be lost on one of these sides though as it is due to end on Saturday May 6th when one or tuther will be at St Andrews for the Vase final. 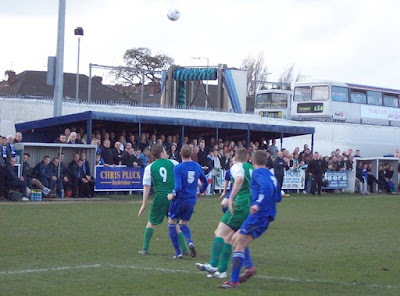 Lairds will, of course, want it all and they have done the work off the pitch to make it happen. The day prior to this game, the ground-graders gave the go ahead for Kirklands to host Northern Premier League football, should their league finish warrant it. The efforts of the groundstaff and volunteers also prime the ground for a big crowd and, as such, a turnout of 528 will be a great disappointment both in terms of revenue and profile, especially as the other semi’s first leg between Bury Town and Hillingdon Borough attracted 1773. Most frustratingly, Tranmere’s home game with Port Vale took place last night.

It also makes Nantwich’s presence all the more visible, decked out in their green scarves and other effects, indeed it is notable that as the doors open at 2, an expectant gaggle of Cheshire chillen are queuing, singing “Nantwich Town is wonderful”, with few locals to be seen. The old boy trying to unlock the gates jokingly tells them he won’t let them in as “they like it quiet on this estate.” Which would about sum up exactly how infectious Vase fever has been amongst the Birkenhead populous. Immediately the far-side cover is claimed by the early Nantwich arrivals as their own, while the Lairds support take longer to mobilise and, it becomes clear, don’t go in for any of that singing lark anyhow. In the adjacent bus depot, the 654 special is lined up to allow 3 or 4 fellas to turn its top-deck into a makeshift, and most likely unofficial, executive box.

At ground level, Lairds keeper John Gillies is in training, keeping out nearly everything welted at him from his coach and his understudy, but beaten every time by the ten year old mascot. “Little fucker” he stage-whispers as he is beaten by another of the cheeky imp’s dynamic cross-goal daisy-cutters. This is not the only unexpected competition he faces; as the ref announces kick-off with a cool sharp parp, a further pocket of Nantwich fans roll in through the turnstiles and begin to berate Gillies with chants of “the keeper is a pisshead”, although clearly this is less scattergun abuse and more identification with one of their own. Later in the game, Gillies also has to cope with the impenetrable Masonic hand-signals from the linesman when waiting to take a goal-kick. The friendly old regular next to me enquires of the keeper as to what the lino is asking; “Fuck knows, you just nod don’t ya?” reveals Gillies, my neighbour whispering “poetic” as our sweary keeper hoofs the ball back into the play. 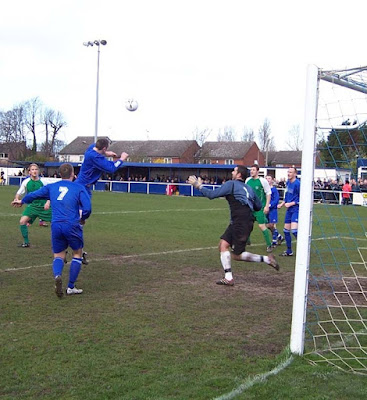 As a game, it is as you would expect of a semi-final, end to end without there being any real penetration, full-blooded tackles going in, but a lot of nerves on show. The ball first hits the net in the 65th minute, via the hand of Ronnie Morgan. In fairness it was unintentional, and there are no complaints when a free-kick is given. 3 minutes later, Nantwich have the ball in the net, and they themselves are denied by a flag, this time for offside. The Dabbers step it up at this point, and score in the 76th minute as Andy Kinsey skips through a desperate lunge and after calmly checking his shot and muscling away a defensive challenge, slides the ball into the net before leaping into the heaving gaggle of behind the goal support. Their solidity/break-away game plan remains effective in the face of Lairds pressure up to the final whistle.

As it is, despite not having as much quality up front, Nantwich win the first leg through the battle of the defences. They are well-organised and resolute, perhaps unsurprising when 40 year old gaffer Steve Davis plays the full 90 minutes at centre-half. Cammell Laird have been favourites to win the competition since the exits of AFC Sudbury and Winchester City, and have won both their league fixtures against Nantwich this season 2-0. It is exactly the scoreline they will need next weekend if they are to keep their Vase dream alive. Nantwich need a repeat display and will no doubt be cheered on by a larger and more vocal crowd which could ultimately prove decisive.

Needless to say, the tread will hit South Cheshire next Sunday. Whup!