As you may have spotted, I have quite taken to winging my way around the country on solo missions. I am not alone in this, and certainly not the only one who has thought to travelog about it. When writing does occur elsewhere about this kind of thing, the word ‘odyssey’ is often bandied about, as though noting the process of sampling the chips at Barnt Green Spartak is somehow comparable to the twelve tasks of Hercules. Pompous tag-lines like “searching for the soul of football” are applied to books, good and bad, when “getting under the skin of my readership” is often the more honest phrasing, particularly in vanity publishing. Like, err, blogs. Believe me, I throw stones knowing full well I’m in a rickety greenhouse full of rotting tomato plants and a rather ropey grapevine.

For me, being a neutral these past three seasons has allowed me to be able to view not just football, but the habits and behaviours of those who watch it, without the bias of association. This is perhaps why I think I write less well on the subject of my own club. Not because I want to paper over any cracks, but I do feel that this season I have had too much cause to write negatively about being a partisan Hawk. This despite it being one of our more successful years on the field. 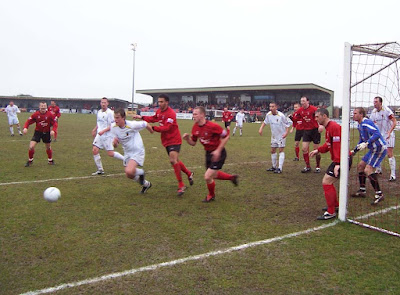 There have been several things that have gone on this season, on the terraces and on Internet forums, which have made me genuinely uncomfortable with some aspects of Hawk fandom. I won’t go into too many details though, I have re-written this weeks posting several times, and after a great deal of thought, I think I’ll keep this bit short. I was thinking my tag-line for this week should be ‘searching for my internal safety valve’, but just the process of writing out some of the issues that I’ve been having was enough. No need to publish, really.

At the crux of it though has been my desire for our club to not be seen in an unnecessarily negative light. A supporter, especially one who travels away from home regularly is a representative, especially as our following is not exactly akin to hordes of marauding Zulu warriors coming over the hill. I don’t expect the Zulus had anything by Showaddywaddy in their war-chant repertoire either. See, I want us to be respected, not reviled. If no one likes us, I DO care. I want to sing up for my club, even if that does involve invoking 70’s rock n’ roll revivalists, and not about anyone else; be a fan, not an anti-fan. Furthermore schisms occurring between members of our support do nothing for my morale. At times this year, and immediately prior to this game, I have never felt closer to leaving the behind-the-goal hardcore, and watching our matches from the side. 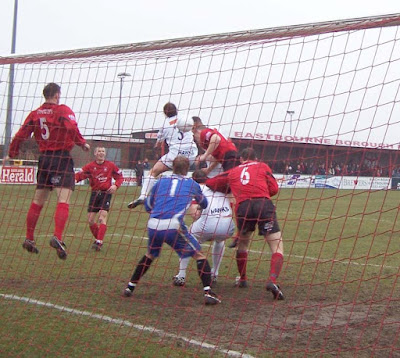 I’d find it difficult to annex myself though and the conclusion to today’s game showed just why being part of the vocal mob can be such an exhilarating experience. For all the frustrations of today’s on-field performance (see, I got to it eventually), an equaliser in the 90th minute, after going 2-1 behind in the 87th, is genuinely thrilling stuff that cannot be matched in neutrality. It would be difficult to suggest though, despite the Get Out Of Jail card being played, that this was a point gained rather than two lost for the mighty H&’Dub.

For the first 15/20 minutes, the Hawks put in virtually a total football master class, opening the scoring in the 5th. Neil Sharp headed down at the far post from a free-kick out on the left, enabling Rocky Baptiste to tuck away easily at the other stick. For the remainder of the first half though, Eastbourne bulldozed their way to domination, levelling the game on 26 minutes, an unmarked Scott Ramsay able to head past Gareth Howells. One each for Rocky and Rambo then, a reference one of our number slips in on the Sly. Ahem. 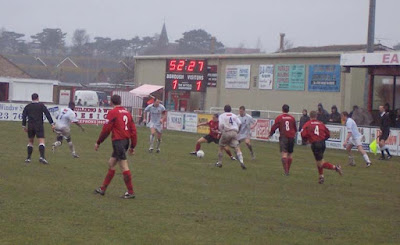 If it weren’t for some magnificent shot stopping from our veteran custodian, we’d have gone into the break several behind. However, the second half was largely about the Hawks pressing forward in the increasingly heavy blanket of rain, as the pitch got heavier and skiddier. Just the sort of environment for chancing your arm from outside the box, and Brett Poate did so on three occasions, each time managing to send gorgeous fizzing thumps a mere inch outside either post or bar. Tough for Brett who looked lively from the moment he arrived as sub at the start of the second half.

With the play-off race getting increasingly tight, Ian Baird chanced him arm, bringing on Carl Wilson-Denis to play up front with Rocky as well as new signing Richard Pacquette, a former QPR player and giant of a striker in the Heskey mould. Comments were made on the size of his calf muscles but for me, more remarkable was his critical mass further up; a posterior of such abundance, it may well have spent several golden summers acting as muse for a world-weary Sir Mix-A-Lot. 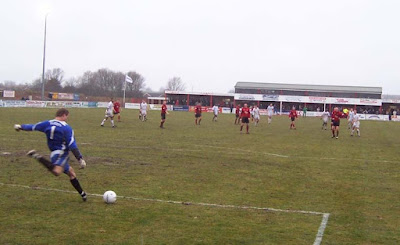 This gamble of a triple-pronged attack didn’t initially pay off of course, stretching the midfield, and thus bringing the defence out of position, allowing Ramsay to again go unmarked to score a virtual carbon copy of his first. Mind you, the immediate reaction suggested a H&W team with plenty of fight in them as 3 minutes later our new man headed home through several bodies to send our support into rapture. It could have been even better not long after, a shot being caught in the legs of Mark Green on the goal-line, which keeper Lee Hook was able then to pounce on as the ref blew the three final whistles.

I hope that on the field, we can revisit our form of the two weeks leading up to this and make the most of our games in hand. I also hope that our support can come together and rediscover the great communal and fun spirit that, having experimented with my hometown non-league club 7 years ago, made me stay.

"a posterior of such abundance, it may well have spent several golden summers acting as muse for a world-weary Sir Mix-A-Lot" - I often find myself wondering the same thing about Titus Bramble.

"One each for Rocky and Rambo then, a reference one of our number slips in on the Sly."

Haha, fantastic. Sadly I failed to pick up on that on my short review of the same match.

I'm an Eastbourne Borough fan who has begun to put together a blog on non-league football (it's also part of my uni work so also includes irrelevent, uni-related posts). Been reading your blog and it's fascinating - do you think the Hawks will make the play-offs?

I might be preaching to the converted here but other sites of interest to you might be www.pyramidpassion.co.uk - run by Eastbourne Borough press officer and self-confessed groundhopper David Bauckham - and the Unofficial Conference South Fans Forum - www.confboard.com/south.mpl - moderated by myself!