Take a look at the Alsager Town web forum and one phrase appears so repetitively it could almost be set to a happy hardcore rhythm. “Farsiders are unbelievable”. So say the Farsiders. Them what stand on the far side like. In fairness though, they do provoke some incredulity. The hardcore who take up position well in advance of kick-off go through their militaristic prep of ‘their’ terrace stand, putting up several flags (including one which worryingly reads ‘1977 Fighters’) and attaching a large laminate reading ‘Farside Ultras’ to the otherwise blank, white-washed hoarding.

As the teams enter the field of play, two wave further flags, another pair release smoke canisters (one, oddly, in the colours of the opposition), while banners shimmering in silver and gold, one spelling the club’s ‘Bullets’ nickname, are unfurled. Indeed, numbers swell impressively during the first half on a terrace so dominated by the home support’s affection that the Ultra’s no doubt, as part of their pre-match ritual, go in for some territorial winkle-action around its perimeter. What makes this all the more remarkable is that Alsager do not come from an ex-league, or even strong non-league, tradition. Only 20 years ago they were forced to close for a season due to lack of funds and support in the Mid-Cheshire League, regaining entry in 1991, and have only been part of the North West Counties League branch of the pyramid for 8 years, earning promotion to the top division in 2002. Yet, they have a pocket of vociferous support which is certainly uncommon at this level, a support that does not let North West Counties League football on the pitch make them feel anything less than Serie A off it, although whether or not you’d find a wheelie-bin with nothing but a deflated football in it on Curva’s Sud or Nord I’ve no idea.

Perhaps that’s the Farsiders own abstract artistic comment on wanting a higher standard of football to arrive at the Town Ground. They’re certainly in with a shout of it this year. As mentioned last week, the North West Counties League Division One is essentially now being contested by 3 sides. Now, the spottier pedants amongst you may exclaim “but, Skif, I thought you were focusing on Cammell Laird?”. Indeed, but when you consider that the other Dobbins in this 3-nag race are Alsager and Skelmersdale, then you can appreciate why I am here. 1st v 2nd. Nice. Plus, I like to think of this as some sort of spy mission, checking out the Lairds competition, albeit purely for my own purposes. Some of you may associate spydom with an arched eye-brow, a pristine tux, and a way with the ladies. I am proof that the reality is more stubbly introvert scribbling barely legible notes, picking his nose and rating the tea.

Readers who journey to this site purely for their love of the leaves will be no doubt be delighted to learn of the quality of the Alsager char. It is that rarest of things, a beverage from a football refreshment hut that doesn’t have the same long-lasting side-effects as opening the Ark of the Covenant. So with all my precious, pinky flesh intact, the first Saturday in ages that isn’t too bleedin’ wet or too bleedin’ cold, plus a pretty decent top of the table clash and, y’know, this North West Counties mini-tread is doing me the world of good. Coming soon, of course, I will be providing a refreshment comparison table. Graphs and pie-charts. A North West Beverage league format. Name change to Hobo Tea’d, maybe. It’ll be Anthony Worral fackin’ glorious. 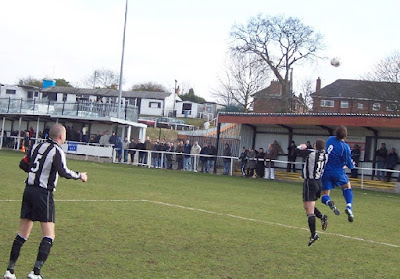 But while I dream of ‘Saturday Kitchen’ style brand extension, the Town Ground continues to fill, to levels not often seen in this league (particularly if you disregard FC United of Manchester’s explosion of the entire league’s attendance records this year in Division 2) as a couple of hundred line not only the 4 sides of the pitch, but several gather on the plateau outside the social club which lies slightly further up the hill. From under the far terrace, the are-you-with-us-or-against-us rallying call comes - “Bar-side, bar-side, giz a song”. The Rovers-shirt wearing barman with the thick West Country accent is soon amongst it. Here, yer either Farside or yer Bar-side. Despite his love for manning the pumps, our Bristol-exile clearly knows which side his bread is truly buttered, now that he’s here in Cheshire. He isn't alone in crossing the great divide.

The singing continues throughout the first half with plenty of original material, although you might argue that they’ve stolen the appropriation of the opening brassy bars of ‘Ring of Fire’ from the Anfield choir. I don’t expect, however, that the Kop kick-start their rendition with a mobile ringtone fed through a loudhailer.

Amongst all this, a game has broken out and a pretty good one that befits two sides dreaming of the Unibond League. Early on, Alsager keeper Lloyd Parry has two opportunities to show his acute spatial awareness, or perhaps his good fortune, as on 4 minutes he lets a fizzing free-kick run past him only for it to ping off the outside of the post. Later on, in the 22nd, again a free-kick is awarded centrally. This time it is floated over, Parry rooted to the spot as it skids off the top of the bar.

Several chances are created for either side, Richard Mitchell hooking just over the bar with an overhead kick for the Bullets, while Skem also flash just too hard and too high. Town also manage a one-on-one chance, but Skem keeper Peter Crookes makes himself big enough to prevent the attacker catching up with his overhit first touch. 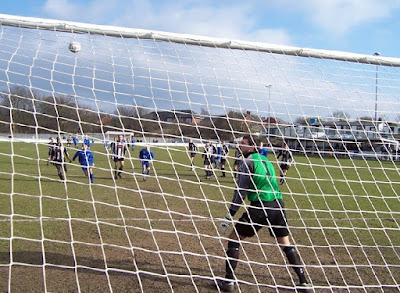 In the 32nd minute, it is the away side who score first, Carl Osman breaking down the right, passing to Michael Cole who curves a cross over the head of striker Paul Rogers and the entire Alsager defence. However skipper Stuart Rudd collects at the far post and rifles his shot firmly into the net before heading in the direction of the Skem supporters gathered behind the goal. The cheering gaggle collect the scorer in their arms, where he is followed by pretty much the rest of the Skelmersdale side, as they form a structure more in keeping with a town show motorbike display. Alsager’s support reach into their locker though and immediately break into “Lets all have a disco.”

It is clearly inspiring to suggest a knees up, as Alsager level things within 5 minutes, Peter Heler sprinting through again to beat the after-thought of an offside trap to slot the ball underneath Crookes. The Alsager players also try to compete in the human pyramid stakes, although they refrain from sprinting into their waiting Farside support to do so. Whether they have perhaps been put off by a tangy hint of urine hanging in the air is open to conjecture.

On the stroke of half-time a firmly struck Rudd free-kick flies just past the post accompanied by the sound of a lone “How wide do you want the goal?” through the megaphone. Not that the opposition are the only people they taunt with their hectorer’s bugle. At the start of the second half, the owner strikes out against his brief loneliness asking, seemingly rhetorically, “Where’s the Far-side gone.”

The second half is a little more niggly than the first, nobody wanting to give anything away. That said, the tackles remain committed, which sees plenty of pitch scurrying for Alsager physio Kenny ‘The Rub’ Matthews. Aye, there he is, waddling on his short legs in the way that should be compulsory for physiotherapists. Elsewhere Lloyd Parry is combating the low-setting sun in fine pikey style, resplendent in a burberry cap. Such apparel appears to bring out the hoolie in him as he engages in a running verbal battle with the Skem behind-the-goal boys, taking umbrage at one comment which he then suggests they “sort out after.” 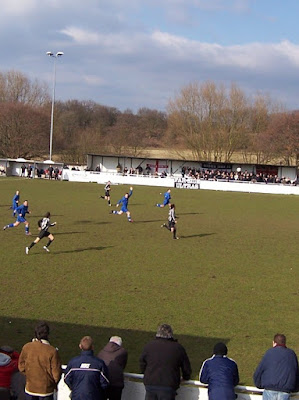 As the match peters out, and despite a draw being better for the home side, it is they who go the closer, Ryan Dicker climbing high to meet a free-kick and head just over in the 83rd minute, while Paul Macari’s speculative shot only curves away at the last minute. The Farside by this point are pogo-ing like Exploited fans with their shoe-laces tied together. They even break into the Barmy Army ‘Everywhere we go-oh’ epic, adding their own local lyrics to create a lengthy parable to all the attractions of Alsager, including, of course, “the little wool shop.”

On the final whistle, there are handshakes and applause all round. A good game, played in a good spirit, with the home side keeping Skem well within their reach for the run in. Plenty of variables to come yet in this league, without doubt.

Cammell Laird were again missing from League action, instead winning their League Cup semi-final first leg against Flixton 5-0. With the fixture congestion, the prospect of a dead rubber 2nd leg next weekend must seem fairly cruel. Serves them right for showing off, I guess.

Another fantastic write-up. Particularly liked the line about the average footy ground cuppa and the Ark of the Covenant. Sounds like the Alsager mob did their best to make it an entertaining afternoon.

Incidentally, I was deprived of the opportunity for some hobo-treadin' action of my own at the weekend. We had our Gillingham-supporting mate down from Aston, and were only foiled in going to see the Gills in action at Bristol City by the vagaries of the train timetable. A good thing, in all honesty - the Gills got tonked 6-0...

There's a shame, would have been interesting to hear your thoughts on the League One action.