In an ordinary year in the North West Counties League, step 5 of the non-league pyramid, the championship chase will see only the very top side progress. No play offs down here, for the very simple fact that the it shares feedership into the Northern Premier League with the Northern League, the Northern Counties East and the Midland Alliance. Often headache prevention comes in the form of clubs finishing first who aren’t in the financial position, or with a good enough ground, to move on up. Last season only Fleetwood Town ascended, Dunston Federation Brewery, Rushall Olympic and Goole all staying where they were.

Indeed, it is for this reason that the FA has delayed the restructuring of the National System pyramid in its most northerly reaches. Their argument is that not enough clubs, as yet, are of sufficient standard in terms of facilities, to allow the Northern Premier to split their second tier into two geographical divisions. The Isthmian League will be doing just that this summer, while the Southern League will turn its Eastern and Western back into North and South. This is Phase 2 of the FA’s blueprint that aims to reduce travelling times for teams lower down the pyramid, the first phase, two years ago, being the expansion of the Conference and the gentlemans' excuse-me which saw clubs shift back into a more geographically appropriate order amongst the Northern, Southern and Isthmian.

The Northern Premier’s officials are putting a spanner in the works though, saying they should be allowed to get their new Midland division going during the summer as well, and are taking the FA to arbitration over it, which threatens to delay the whole business for an entire year, which would certainly be a blow to the 100 clubs who have brought themselves up to scratch and applied for promotion this year.

All this makes it a bit confusing at the top of the North West Counties League but, it seems to me (and this is an aspect of non-league on which I claim no expertise), that if arbitration is dragged out and Phase 2 delayed, or the Northern Premier League lose, then it will be the regular state of affairs; promotion from the NWCL coming only with the lifting of the championship.

As such it’s getting quite interesting at the top, with several clubs in the hunt. Skelmersdale United set the pace early on and remain at the top, 2 points and 2 games ahead of Alsager Town, while in 3rd place currently lie Wirral-based Cammell Laird, 6 points further behind but with 5 games in hand. It might be argued that the Lairds fate is in their own hands but whatever they are given with those games in hand, threatens to taketh away also, with a horrific fixture backlog building up. Take into consideration that 4 further Saturday fixtures will have to be moved to accommodate their two-legged league cup and FA Vase semi-final appearances and you begin to appreciate that Lairds’ road to success has a virtually perpendicular gradient.

You might think from this that someone up there clearly doesn’t like them. For example, my hitch with them through the remainder of this season was due to begin at Atherton LR last Tuesday. It was postponed, Mother Nature clearly having a monkey on Skem to romp it.

A home defeat this previous Thursday, 4-2 to Newcastle Town, may well have been a timely kick-up the arse to try and pick up as many points as possible before the legs really start to get tired. An away game with mid-table Abbey Hey presents an ideal opportunity to jump-start up the imposing incline. Already though, squad rotation is becoming a necessity, and as such top scorer Ronnie Morgan (39 goals and counting) has to begin the game on the bench, although Jamie McGuire (with a mere 30 to his name) starts as skipper.

Of the 75 present, a sizable proportion comes riding with the Cammell stampede, and camp out behind the away dug out, while regulars from the Gorton area of Manchester scatter on the covered terrace, some braving the peeling bench seating placed either side of the single concrete step. Others have got here early, parking their cars to face the pitch on both sides of the clubhouse, taking the opportunity presented by their punctuality to catch up on their kip.

Lairds, resplendent in bright blue kit that highlights that games every 2 or 3 days will not see them acquiesce to tardiness, look well up for responding to their healthy support. That said, Abbey Hey make an initial attempt to impose themselves after kick-off, but soon enough Cammell Laird’s irresistable force starts sweeping towards the railway end. If any legs looked tired, it is the 22 belonging to Abbey, but they solidify themselves for a time into a makeshift immovable object that is centred around brothers Andy and Rick Watson (is it wrong to assume two players with the same surname and pattern baldness issues should be related), the latter looking a bit like Clive Walker, while the former appears to have been recently uprooted from permanent fixture on Easter Island. 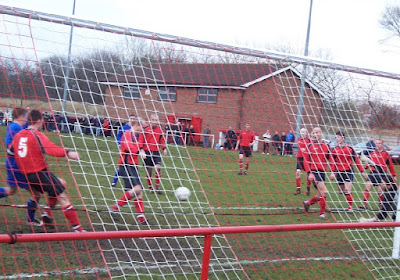 Abbey Hey keeper Joe Molloy even has time to worry about the quality of his refreshments, the sub sent round to stock up the back of his net with booze stating with some confusion “Joe, you’ve already got a bottle”, the keeper snootily replying “Yeah but it tastes like shit” like Oz Clarke making a play for the Gordon Ramsay market.

However on the half hour, Lairds finally edge in front, some sharp trickery on the edge of the box leading to a cross which sees Rick Watson’s attempt to mow the ball into Derbyshire sliced into the net (see picture above). 3 minutes later, Lairds increase their lead in similar style, a shot from outside the box bringing a neat save (see picture below) from a now suitably refreshed Molloy. However, while the defence make like a Spiritualized audience in their appreciation of it, Lairds steal in and square the ball across the 6-yard box where three blue shirts are queuing excitedly but politely, Anthony Hargreaves getting his boot in first.

At this stage, Cammell Laird are looking imposing and potentially devastating, like they have Bigfoot tyres attached to their collective axles, Abbey Hey lining their path like rusty, gutted Cortinas long ago nicked from a Stockport car-lot. After a quick half-time service though, the Hey! are able to fight fire with fire briefly, Andy Watson attempting to right his brother’s own goal with a free-kick. Sadly, it ends up curving straight into John Gillies arms and Cammell Laird go on the attack again, the trickery on show bewildering Abbey Hey skipper Dave Brocklehurst to the point of falling over. 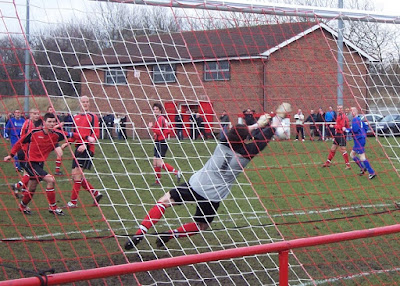 In the 65th minute, a handsome strike from Stuart McGill later requires more evasive action from Gillies. From the resulting corner, there is confusion between McGill and Andy Watson as they both attempt to strike the same dropping ball. This allows Lairds to break away, Chris McGuinn powering through to belt the ball into the far corner for a well deserved 3rd. With Abbey Hey demoralised, Cammell Laird are able to really turn on the style, two goal-line clearances required in quick succession around the 75th minute, one shot being unable, albeit understandably, to elude the statuesque Andy Watson’s gigantic head.

In the last ten minutes free-kick being flicked over the 10 yard man, Eddie Jebb then drawing said defender to allow Hargreaves to run into acres of space on the right. Later, in the 89th minute, McGuinn flicks a on a throw-in, Jebb cutting inside and laying on a perfect pass for a shot that is scuffed. Both of these moves may come to nothing, but it’s like the Pele 50 yarder that bounced outside of the post, some things don’t have to reach an adequate conclusion to delight. 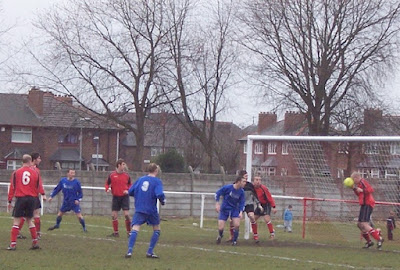 It is with play like this that Cammell Laird show why they belong at a higher level and, as if to compound the theory as I write that particular note, a quite brilliant display is completed with a chip off top of boot that arcs over the keeper and in off the underside of the bar. “Anthony Hargreaves, get his name written down, lad” I am instructed by someone clearly able to see that my scribblings are barely able to keep up. I’m starting to think I chose wisely in picking this team to ‘follow’. C’mon you Battleships.

I can only hope the driver’s seat snoozers came to in time to see it all. The Premiership might be football’s jeroboam of Moet but, when it’s as breathtaking – yes, breathtaking – as this, give me the Dougal hot water bottle and bootie slippers of the North West Counties League every time.

Links
Cammell Laird website
Extreme Groundhopping with some Lairds history
Posted by skif at 2:56 am

May i point out that you are now officially an expert at taking the p1$$ out of Andy Watson (playing for Abbey Hey in this report).

You made a comical reference to him in both this one, and when he played for Woodley Sports in the recent FA Cup tie at Kendal Town.

Strange thing is, i was at both of them matches as well! I know the two kids playing behind the net on the final picture. Two little legends.

I thought he looked familiar. I'm also pleased at maintaining consistency without realising it.

If you ever end up at Rossendale United - that is where he is struting his stuff now!