In as much as I’d love to spend the time coming up with some genuinely imaginative swearing, I don’t see why I should spend my precious time coming up with some fresh invective for the dramatically underperforming Hawks, when the regular base tones will do, albeit now with a slightly more panicky edge. Fill in your favourite term of exasperation in the box provided above, and that should present you with a more than adequate picture of the disbelief that has enveloped we H&’Dub followers after a successive 3-1 defeat in what is supposed to be a promotion-chasing campaign.

Three defeats in four games then, two of which have been to sides in the bottom three, while our game with the third of those relegation-fighting sides was postponed last week. Perhaps a lucky escape there, although apparently it was a fairly controversial late cancellation. Word is, the referee called the game off despite everyone else, including his assistants apparently, telling him the surface was fine. He, allegedly, didn’t go out personally to check. 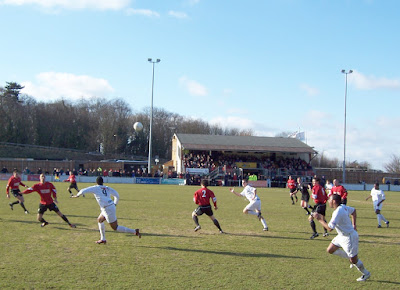 Mr Robbins (Bristol) had apparently been bricking it about a recent Non-League Paper article that concerned player injuries and insurance issues and feared being sued in the event of any harm coming to any of the players. With a local radio reporter successfully attempting a little light chin music in the offending “dangerous, unplayable” (I quote the referee’s succinct report verbatim) area, achieving as much lift as Curtley Ambrose with a cob on, it seems the vociferous complaints from both sides, at being out of pocket (amongst other things), were fairly reasonable. Besides FIFA laws state that refs can’t be held liable, so it really does appear to have been a complete waste of time.

One suggestion from our support was that we should sue the referee for loss of earnings, while others took it on a more personal level; the local evening paper’s hack-in-charge-of-non-league-coverage, who reports on H&W 99% of the time, chipping into the assembled indignation with “well, I’ll never forgive him for making me watch Fareham”. Apparently several had taken the option of Fareham Town vs Bemerton Heath Harlequins, and were met with a game of football so dull, ITV were apparently in negotiations to package it as a pre-watershed sitcom.

Still, I imagine my brethren might have taken that experience, over watching the Hawks capitulate once more, in manner akin to the Maidenhead game. Today, they are not quite as laissez-faire as a fortnight ago, although Fitzroy Simpson continues to equate playing in the Conference South with slipping into a cheeky thigh-length kimono and knocking back a pink gin. 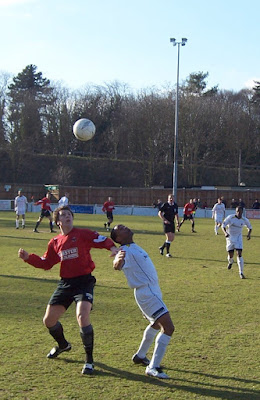 See, for much of the game, H&W had plenty of the ball but seemed to have neither the ability or wherewithal to do anything with it. We have our moments, of course, and are unlucky to have a Carl Wilson-Denis strike disallowed for offside in a very contentious decision from the assistant referee. A female lino, I might add, which always makes me wince, not in terms of ability, but the type of comments that are likely to emit from the Hawk travelling support. A bunch of disparate characters we might be, but collective responsibility and all that, and today is another one of those days, like at Yeading, where being behind the goal isn’t much fun at all, too much aggression flying about cos we ain’t winning. Mind you the lineswoman doesn’t do herself any favours with ill-advised attempts at banter as she checks the net before the start of the second period. Not really a cause for outrage though. Mirrors required.

Not that it’s always this way though, and I don’t think we’re always bad losers, I guess it’s just conceding an early and likely insurmountable deficit that gets our tempers flying. Indeed, we find ourselves two behind within five minutes, two carbon copy goals coming from mistakes on the right. Neil Kennedy twice exploits the defence’s collective paralysis, where they take on the appearance of a gaggle of slothic zombies controlled like a fußball back-line by some self-defeating master brain, slipping the ball far too easily across goal for Robbie Nightingale to eagerly lap up. It’s a double suckerpunch within a single minute from which the Hawks never recover. A third goal not long after the second half re-start pretty much kills off the whole affair, aside from Tom Jordan’s jabbed consolation from a corner in the 55th minute. 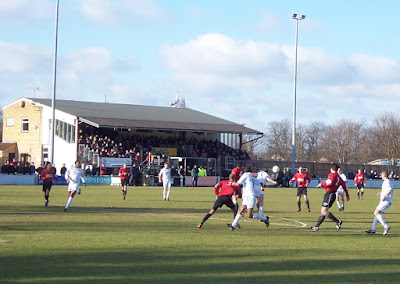 This is frustrating, but we need to keep our composure and keep supporting these players when out their on the pitch to try and raise them out of this uncharacteristically poor pit of form. Injuries haven’t helped, but damn our raised expectations. After all, this time last year, we were looking certs for relegation to the Ryman League. However, after so long flitting between the top 3 places this year, to find ourselves, after this game, outside the play-off berths for the first time in god knows how long makes us fear that once again we’ll choke when it really matters.

The end of season run-in puts into our hands a test of character that could still see us pick up the keys to the magical chocolate factory that is the Conference National. In the face of this, though, our players currently seem keen to not only sneak out with the everlasting gobstopper but also Willy Wonka’s favourite cane and candid polaroids of his wife. Here's hoping they'll think better of it, and turn back. 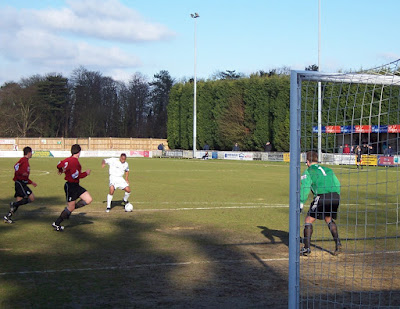 Hopefully the Hawks may have been inspired by the ostentatious silverware on display in Histon’s club bar; the Southern League championship shield, Histon’s loot from last season which, if upturned and put on legs, could easily house the buffet at a socialite’s wake. It’s ever increasing spiral outwards begins as far back as the 19th century, with names such as Southampton St. Marys and Tottenham showing just what a different beast the Southern League is nowadays, it’s status reduced to 3 steps down from the football league where once, it might be argued, it was as good as. Indeed the two clubs mentioned reached the FA Cup final, Spurs winning it in 1901, whilst nominally ‘non-league’ clubs.

Assuming the players ventured in after the game to drown their sorrows, it’d be hard for them to miss the thing, as it takes up so much of the far wall that it could well be a load-bearing trophy. Hopefully the sight of something as impressive as this will re-stoke the fire amongst the Hawks for honours this season. With money constantly an issue, who knows when we might get such an opportunity again?

Thank you for providing relevant information. I’ll keep visiting it for updated information.