If Pudsey-based Farsley Celtic look a little riled coming into the second half at Rossett Park, it maybe that promotion rivals Marine are alleged to have left the away dressing room empty of refreshment during the interval. Who says the stakes aren’t high in non-league? It is hard to dispute, though, a claim of “errr, we forgot”, as the lack of drinks isn’t quite as damning a pointer to malevolent forethought as, say, a fresh shit on the physio table.

That said, Farsley spend the entire 90 minutes, not just the second period, looking the more tigerish. This is particularly so in midfield, each second ball quickly snatched like car keys from the over-confident but heavily inebriated. This is in part due to the depth of Marine’s defending, a tactic undertaken to combat Farsley’s noted pace along the flanks. 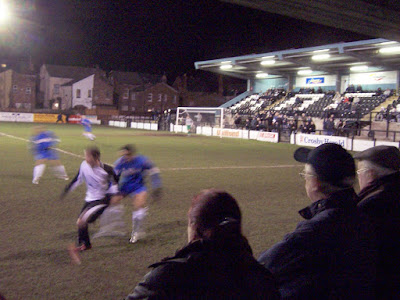 It is this kind of tactical acumen that has seen Alvin Macdonald, ex-manager of pretty much every club around this level on Merseyside; make an excellent first impression with the Mariners. This is a new era for Marine FC, this being their first season sans Roly Howard, who finally relinquished command after 33 years in the summer. No longer did the Howard portrait peer down on every Crosby dinner table. The King is dead…, and all that. Although apparently not, as posters around the ground advertise the appearance of Elvis in the main bar this coming Friday. The lack of the word ‘tribute’ may well be significant.

Anyway Roly, doting granddad, Guinness Book of World Records entrant and Kenny Dalglish’s window-cleaner, oversaw quite a regime in his third of a century at the helm, and is such an iconic figure round these parts that you half expect to find his kindly septuagenarian jowls cast in porcelain somewhere in the ground. The lack of a bust is made up for with laminated cuttings from the various printed media that covered the climax of his record-breaking gaffership. It seems only a matter of time before Roly is usurped in these stakes however as Jolly Jack Pearce at Bognor is also in his 4th decade at the helm and has no immediate concerns over his employment, considering he’s also their chairman. 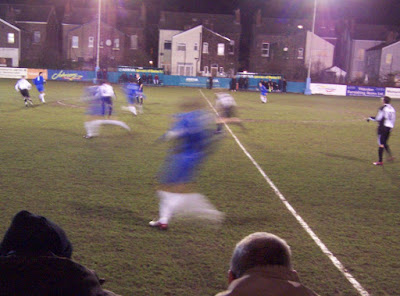 Roly and his assistant (for the back 29 of his years) Roger Patience, were more than just hired hands, turning down offers in the earlier days from nominally bigger clubs such as Altrincham and Rhyl. Roly built not only several league winning sides, but the Marine club as a whole up to a level that would have seemed impossible when the club first formed, in the Marine public house, in 1894. Since the start of Roly’s reign in 1972, Marine have risen from the Cheshire County League to the very cusp of the national Conference. Two years running, in 1994 and 1995, Marine finished at the top of the Northern Premier League heap, promotion denied them due to ground grading issues. Meanwhile they have reached the semi-finals of the Trophy twice and gone on 5 FA Cup runs, scalping Barnsley and Halifax as well as running Rochdale very close in a game played at Anfield. Not bad for a pub side.

It is this community club spirit, the loyalty shown to the manager even during the poor seasons that slightly tainted the end of his long reign, and the fact that Rossett Park is hemmed in by housing on virtually every side (dug-outs only on one side, an almost ridiculously thin strip of covered terracing along the other), that makes Marine my kind of club. If Havant & Waterlooville didn’t exist and I was likely to remain in Liverpool permanently, then this would be the side I would gravitate towards without doubt, despite my passing affections for Cammell Laird FC and Skelmersdale United. 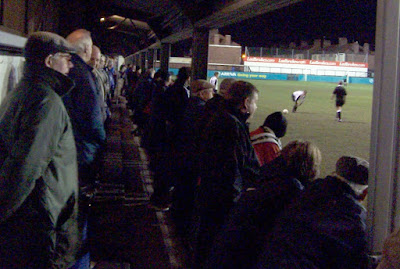 To give you an idea of how much the notion of footballing family permeates every nook in this undersized stadium, we can take a look at the fact that supporters have recently donated cash so that local school kids can be given Marine flags. We might also spot the thriving supporters club activity run by an inspiring bunch of die-hards. Then, we might look inside the programme, where a whole page is given over to Chief Steward Tommy Scaife’s epic poetry that weaves in references to virtually all their club personnel. I imagine Darren Brookfield will be fairly pleased with “doesn’t look his age” despite the following “now the opposing team wish they’d brought a cage” which could as much cast him as an ogre-like freak-show exhibit as it could highly prized midfield general. It is not the last of the oblique compliments though, Marine’s physio being treated to a blunderbuss of a couplet: “Pleasing to see Ann on the bench/this lady certainly isn’t a wench” which, as lyrical deference goes, has all the subtlety of Tracy Emin decorating her camping gear with a nail gun.

With their box ground that lies not only in the shadow of the surrounding streets at close proximity but the two other Liverpool clubs, you might argue that their Northern Premier League championships saw them punch above their County league weight; indeed Roly Howard’s penultimate season saw them miss the cut for the new Conference North. However, expectations are high here and Alvin MacDonald sees the new Conference regional division as Marine’s “natural home”. With the club lying in 3rd place prior to tonight’s game, 6 points behind leaders North Ferriby, but with 3 games in hand, they have plenty of reasons to feel optimistic about potential progress this year. 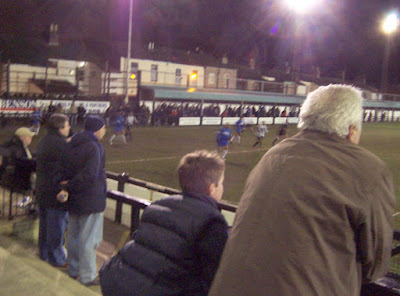 Tonight’s visitors, Farsley Celtic (geographically my Marine equivalent during my year living in Leeds), are just 1 place behind the home side, with merely a 4 point deficit. After they were stripped of the championship and automatic promotion last season in the controversial fall-out of the FA overturning the Unibond League's ruling to expunge Spennymoor United's record, Farsley too will fancy themselves in the run-in and, as such, tonight’s game is a vital one for both sides. Is it any wonder Marine might have mislaid the kettle?

Farsley’s inability in breaking down Marine’s resolve means that Danny Byrne’s handsome strike into the top corner in the 11th minute keeps the sides apart for the remaining 79, although Andy Ralph is required to make a tremendous save in the final minute. After 3 rather unhelpful draws in the league, including their one-all draw at Leek, Marine will once again have confidence amongst their squad that they can go on to promotion and, possibly, without the need to take part in the play-offs.

So the busier side may not have won, but being allowed a flurry of activity doesn’t make them necessarily the better side. I think it's fair to say that Farsley are no Barcelona, if not on the pitch then certainly in terms of the sanctity of their strip. While Barca’s shirts remain famously free of advertising, Farsley’s read, quite meekly, “This Space For Hire”.

I've always been curious about Marine, this unusually-named club scratching a living in the shadows of the giants at either side of Stanley Park, so your potted history of the club made intriguing reading. As for the game, I think the Northern Premier should consider levying a points deduction for the improper conduct you refer to... no, not the lack of half-time drinks for the visitors, I'm talking about the Chief Steward's attempts at poetry...

Would love Marine to be promoted though, so hopefully they can brush the offending verse under a carpet.

Besides after H&W's performance this weekend (appraisal on here v. soon), I need one club I'm interested in to sustain their promotion ambitions.