Every non-league away day should begin with a full, artery-blocking breakfast and end with a curry. That, my friends, is the law of the beano. Today I manage that, albeit with the Ruby in non-Hawk company, but I’d trade more than the pilaw rice and the free poppadoms for the day’s shenanigans to have peaked at 16:50 pm. Isn’t it always the way, though? Whenever you plan the big train/coach trip, rather than sidling up in the back of a mate’s car at ten to three, you can almost guarantee a negative result.

Let’s look at this empirically, from my years based in, and travelling regularly from, Havant. How about the big Trophy game at Rushden where we took loads, got there early and sung non-stop for 90 minutes? 1-0 defeat. ‘Inflatable day’ at Burton Albion in the Southern League, where my entry with a 5ft bottle of Budweiser was briefly prevented by a steward who deadpanned the dictum, “Sorry mate, no alcohol in the ground”? 4-0 Burton. What about Barnet, when they were still a non-league side, in our FA Cup 4th Qualifying Round replay? Spent the afternoon flying the London Eye, but 3-0 to the Bees come the evening, Wayne Purser scoring one the fastest hat-tricks in Cup history.

The rule appears to be that if you dare enjoy yourself before the game, karma will use the game itself to try and level you out. Too much of a good thing is apparently bad for you. Can’t see it myself. Mind you, it wasn’t all joy prior to the first whistle today, as there was a fair bit of consternation among the Hawk support at the news that our attempts to re-attract recently canned Derby County assistant boss Dean Holdsworth to our playing ranks after his efforts for us last year, had been spannered by a club willing to offer him £1200 a week and a house, which is well beyond our currently very stretched means. The club in question? Weymouth. Much of my Saturday was spent watching many of our officials and supporters turning an Oliver Hardy shade of puce by way of response. 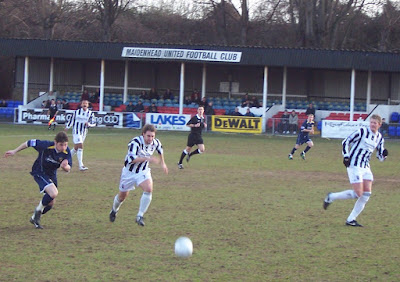 Mind you, we had a similar situation a few years ago with Oxford United legend Paul Moody, who had begun his career at Waterlooville, promising for years that he would finish his career back with H&W, only to volte-face at the 11th hour and join Aldershot Town. However as his girth and injury problems grew rapidly, we didn’t have cause to regret it, and it could well be the case this time that Deano doesn’t cut the mustard with our increasingly bitter rivals. Mind you, 33 goals for us at this level last season suggests this may be a forlorn hope of mine and you can understand the ‘why them, of all people?’ complaints among our ranks.

It’s probably fair to say, though, that he didn’t sign for us in 2004 because he had fond childhood memories of golden summers spent on Hayling Island, so it seems farcical to expect any loyalty from hired hands, particularly those in their twilight period, who are suddenly offered several times more elsewhere. Gutting though and, should the ruling laid down by the Conference that we need to replay our fixture against Weymouth not be overturned by our appeal to the FA, you can just see Deano scoring their winner in that game, can’t you? Back to today, though…

For large parts of this afternoons game, the Hawks looked lethargic, disinterested, as though entry into Maidenhead’s club car park, housed underneath a gigantic concrete shelter and displaying the ostentation of a Roman bus depot, was enough to guarantee us 3 points. We assumed, with worrying arrogance, that Maidenhead, bottom prior to today, would be easily brushed aside. Perhaps we should have made our players aware that this was a club that reached the FA Cup quarter-finals three years on the trot. Between 1872 and 1875 I grant you, but what is football without irrelevant historical parallels? 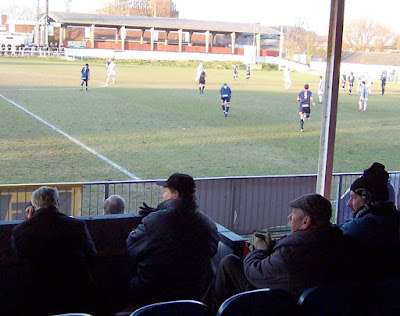 From very early on the modern day Maidenhead imposed themselves, bringing two impeccable airborne saves from Gareth Howells, and they eventually took the lead on 35 minutes, as the Hawks defence were caught leaden-footed by a quickly taken free-kick that allowed Stephen Hughes to slide the ball under our keeper and into the net.

In the face of such a lack of lustre on the part of our players, our support entertained themselves bantering with Maidenhead’s very friendly and conversational keeper Scott Tarr, who took all the comments about his weight in good stride, even adding some of his own self-deprecation to the tried and tested material. Meanwhile an attempt was made at a “give us an ‘H’” style epic, throats drying quickly as even the ‘and’ began to be spelt out, although the ‘Water’ was lopped off the second bit of our name to speed things up. Tut tut. In for a penny in for a pound I say.

The half-time break brought a move to the far end for our behind-the-goal support, where previous visitors had clearly left their mark. A small unobtrusive piece of biro-work relayed a lovely pre-St. Valentines message, “[Maidenhead] Relegated by 1st March 2006, love Slough xx”. I’m sure the York Road regulars appreciate the kisses. 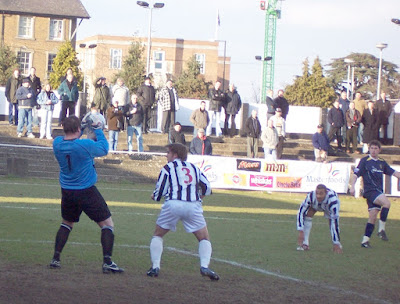 The start of the second half saw no resurgence from the away side and the Magpies increased their lead 4 minutes in, Dean Bradshaw walloping home a rebound causing increased frustration amongst the Hawks. Indeed, assistant boss Shaun Gale was making the most of his touchline ban to have a stand-up row with a Maidenhead steward heckling the play from behind the dugouts. Our man Galey seemed to be suggesting that a club official should conduct themselves with more decorum, his own use of the phrase “stop talking shit” lending a certain irony to his point.

A double substitution around the hour mark put a bit more of the lively into the Hawks stride, our veteran fullbacks being brought off in favour of much sprightlier legs. Indeed, as the season goes on, Robbie Pethick looks increasingly in need of a rocking chair and a blanket for his knees, while Fitzroy Simpson (lest we forget a man who has played at a World Cup) is showing so little class that I’d half expect to find a faded sticker from Londis price-gunned to his leg.

This certainly gave the Hawks a jolt as they pulled one back almost immediately. Rocky Baptiste guided the ball towards goal with his in-step, Ryan Parson’s attempted clearance merely allowing it to the hit the back of the net with greater force. Pushing forward with greater intensity, the Rock almost scored again a few minutes later, a firm back heel locking in Scott Tarr’s chunky paws just in front of the goal line.


As the game wound down, the atmosphere behind the goal was becoming a little frustrated, to the point of combating time-wasting by lifting one of our younger (and considerably lighter) supporters onto the field to kick the ball out of Tarr’s deliberately lethargic reach and toward those waiting to take a free-kick. The Hawks made their third substitution, replacing centre-back and skipper Tom Jordan (for the first time in 84 games – he actually played every single minute of last season for us, fact fans) with young forward Byron Harrison, but this merely made us more susceptible to a break, and Maidenhead capitalised on this to wrap up the game in the final minute, Hughes meeting a nod-down from Yashwa Romeo to complete a brace with a crisp-strike into the bottom-corner.

It is perhaps bitterly ironic then that the Hawks performance today could have used the kind of talismanic aura that a Holdsworth could bring to the side, but hopefully we will learn from two defeats to relegation haunted sides in the last fortnight. After Tarr wished us a warm and heartfelt “good journey home”, and we applauded his tremendous attitude, we sloped off toward the station without recreational pause, hoping that we won’t allow the plethora of recent off-the-field disappointments to affect our promotion push.

Maidenhead United are my home town team and their quaint main stand burned down in the 1980s - somewhat suspicously I might add. They are punching above their weight in Conference South but the ground will never be good enough for the step up. I know this comment is a little late in the day but I was amazed to see that Robbie Pethick and Fitzroy Simpson were still knocking around - even then.