While being a Welsh coastal town right next door to Rhyl, Prestatyn keep their seaside treats a little more understated than their near neighbours. Today’s misty sea is greeted ashore by an ascetic concrete terrace up to the promenade. Fair enough I hit Rhyl in July, and February waterfronts aren’t known for warm forearm-cradling handshakes or brotherly hugs (the “No wading above knee height” sign is a touch redundant at this temperature), but this Saturday afternoon scene is eerily similar to that balmy summer evening, there being a parallel in the small amount of strollers allowing their dogs to patter about the clear sands.

Perhaps it does get busier than this at the height of summer weekending, but during winter with the Tourist Info Centre closed, along with the mini golf which is certainly light on the ‘crazy’, it is unsurprising that there are footpath signs directing one to Chepstow. 182 miles away. There is logic to this though as there and here represent the poles of the Offa’s Dyke path, and it is apparently quite an achievement to complete it. However the sign in the abandoned tourist office directs the winter-time successful to sign the triumph register in the next-door Nova Centre leisure complex, home this morning only to a few straggly souls in its bar. A path to glory. 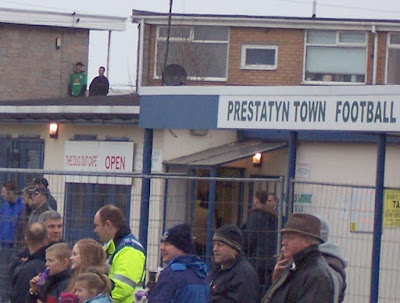 Having walked 182 miles, you can celebrate along the adjacent 3 beaches, the Barkby with the largest natural dunes in Denbighshire, or have a stop at the Pontins, behind which lie the neighbouring homes of town’s football and cricket sides, both of which are separated from the Bastion Road, from the station to the sea, by open fencing which will allow the enterprising to witness this afternoon’s Welsh Cup action gratis, if 4 quid is a little beyond their means. One chap does just this, having to peer over the small boys kicking about on a half-size training pitch running cross ways behind the open-end goal. Clearly this is the important action as the training pitch has 4 floodlights trained on it, while the main facility has none, hence an early (2pm) kick-off.

Our blagger who art in flat-cap (as well as the two lads perched on a garage attached to the flats at the Pontins end) also miss out on the inclusive programme, which alerts one to several sponsoring local businesses such as Ideal carpets (who appear a little presumptuous), Ffrith Post Office (“gives Prestatyn Town F.C. its stamp of approval”) and Karl’s Fish and Chips. Karl says to visit him “for the best fish and chips in town”, adding in slightly smaller lettering “there is NO other choice”, this either being fascistic verisimilitude or, given the lack of bustle around their town, quite literally the case. 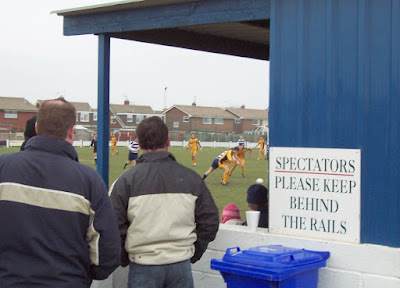 Prestatyn are clearly ambitious, and dreaming of the Welsh Premier League, but currently they are 2 levels, plus between 4 and 6 floodlight pylons, away from making this so. They are in a good position to gain promotion from the Pentraeth Honda Welsh Alliance to the Cymru Alliance at the minute, currently unbeaten and lying just behind Rhyl reserves, but with a game in hand and the possibly more encouraging knowledge that reserve sides cannot be promoted. They are also making the first strides off the pitch, adding hard standing in one corner, and building on the other side so that their stroppily separated covered seating and standing areas can finally be kids united.

Today’s Welsh Cup tie also allows them to see how much progress they are making on the field, as their opposition, Carmarthen Town, currently lie 6th in the Welsh top-flight having been part of it since 1996, making excellent progress ever since. Indeed, earlier this season Carmarthen found themselves in the UEFA Cup 2nd Qualifying Round, having dispatched with Eircom league side Longford Town, up against FC København in front of 11,000 at Parken, also home to the Danish national side. 6 months later, it’s Bastion Road and a different kind of challenge. Just like the English version, with 2 flights difference, they will be expected to win, and comfortably. Here in Wales though, the gap between levels is a touch slighter, in terms of on-field capability anyway.

A swelled crowd of 280 is in attendance today, many with the hope that an upset will occur, and it is clear that this is a prestigious occasion for Prestatyn, the chairman getting giddily excited about the presence of S4C’s cameras for their Saturday evening football show. Even the mayor is here, weighed down into a slight hunch by a massive insignia on the end of his ceremonial chain. He’s doing his best to contain his excitement in his hangdog jowls which, if a 10-photo morph was undertaken between Droopy and Mark from Peepshow, would be about the 8th picture along.

The players of Prestatyn do not seem overawed by their task at hand, trying one-touch stuff from the off and testing their higher level opponents. On 10 minutes, a diagonal pass shoots across the box, the side-foot that meets the ball sending it in criss-cross with the original trajectory and just wide of the post. This rallies Carmarthen to stamp their authority with a succession of corners, testing stout, cooking-apple-cheeked Prestatyn keeper John Dunt (whose school nickname I think I can guess at). A vision in turquoise, one of the well-dinnered custodian’s first contributions is to scuff a clearance to a marauding midfielder who powers through and unleashes a shot which is blocked just too late to prevent our corpulent hero from collapsing thunderously into the newly bunkered turf. A brave keeper, he has to be on his guard as the passing between the defenders across the box is the one betrayal of their status. “SQUEEEEEZE” he yells loud and often, eventually adding “that means fucking run” by way of subtitle, concerned that his team-mates’ ignorance of his instruction may possibly be as a result of him making things a little too complicated.

It’s a game which brings out the enthusiasm in the home support, particularly the regulars. The chap in charge of the whiskey & biscuits tombola doesn’t allow his enrapture in the game to cause him to miss the commercial opportunity of this much bigger than average crowd, shouting “Well in Dave lad raffle tickets car stickers” as one perfectly formed utility sentence. 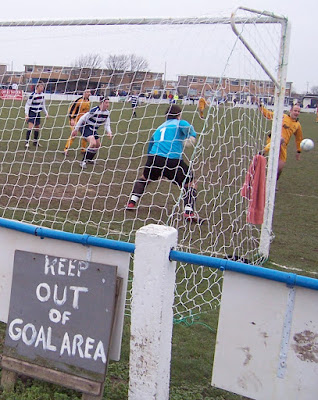 It has become clear that, on the field, Carmarthen are savvy enough to bide their time, and they refuse to panic in the face of stubborn resistance from the Seasiders. However on the half hour, they finally manage to get in front, a beautiful cross from Luke Hardy is the perfect height for Mark Dodds to head down into the ground, the ball bouncing above Dent’s dive into the far corner.

In the second half, Prestatyn again start brightly having several pot-shots, two of which require decent catches from Adrian Delve. The second, on the hour, causes Carmarthen bottoms to be kicked once again, but as they pressurise, they occasionally leave gaps. One of these, on the left flank is exploited in the 70th minute, as Prestatyn get too much time and space to enter the box, Cameron Roberts drawing the keeper before side-footing a slo-mo pass across the 6 yard box for Neil Gibson to sweep in. It is no more than their determination deserves.

Their hysteria, and that of the crowd, doesn’t last long as within 3 minutes, Carmarthen re-establish a lead. A Neil Smothers daisycutter hit from outside the box without radar, heads safely towards Dunt’s bosom, before young captain Dave Hayes sticks out a leg which diverts the ball into the bottom corner. ‘Hayesy’ slumps to the ground, an odd, embarrassed smile emerging from behind his fingers. 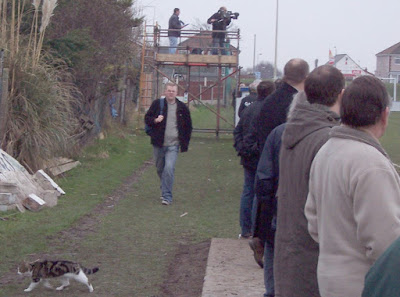 In an instant, there is almost a calamity at the other end, as a defensive header flicks backwards and only just wide of the post. As the end of normal time approaches, all the pressure heads toward the Carmarthen goal, and the excitement and tension gets too much for some. Ignoring the ‘please stay behind the barriers’ notices, a young cat enters the field just behind a Prestatyn attack, takes the pass and breaks down the wing shaping to curl in a cross to the Carmarthen back stick, before the visitors gaffer has the presence of mind to throw on some brightly coloured wool for the last 5 minutes.

Well, it was true all the way up to ‘…Prestatyn attack’.

With the cat now safely back through the hole in his masters’ fence, and subpoenaed to face a banning order, Prestatyn force two injury-time free kicks on the edge of the box, the first literally just in front of the line causing much protestation at the lack of a spot-kick. The curled effort requires Delve to be alert, while the next set-piece is less successful and the last action of the game.

Carmarthen move into the quarter finals then, where they could again face lower-league opposition as ‘my’ Welsh club Pontypridd Town lost 5-0 to another lower league side Goytre United, and Llangefni United pulled off a 3-1 shock away at top-flight Caersws. With TNS knocked out this weekend by the only other pro side in the Welsh pyramid, Llanelli, there will be a new name on the mug this year. Despite not being entirely convincing here at Bastion Road, Carmarthen will fancy themselves to go all the way now, with a semi-final draw against Llanelli being their only major concern.

A feline pitch invasion, an unenthusiastic-looking mayor who's a cross between Droopy and Mark from 'Peep Show' - such are the unexpected highlights of a Hobo Tread match report. Keep 'em coming!