If Danny Baker’s series of videos from the early 90’s taught us anything, it is that football is rarely this ‘funny ol’ game’. It’s a heartening ol’ game for sure, but pretty often it’s angry, it’s upsetting and very much like repeatedly crashing a car door against your own head. Never has so much violence been so willingly self-induced, as in the name of following one’s club.

This bruised and bloody semi-consciousness is what most supporters’ know as ‘the relegation year’, and a great many of Leek Town’s support are priming their chins upon the outside edge of a passenger seat as I write. Stranded at the base of the Northern Premier League’s top-flight with 13 points, 1 place behind AFC Telford United who currently have double that, Leek are seemingly doomed to demotion. They have also been without a gaffer for the previous fortnight, Nigel Deeley having fled the scene (blaming interference from the ex-, Paul Ogden, still at the club in a commercial management capacity) just prior to a light gubbing at the hands of Ilkeston. This was the second instalment of a recent trilogy that has brought them to this game on the back of 3 defeats with 10 goals shipped and none scored. More alarmingly, they have yet to win at home this season. The most upsetting thing about all this, I imagine, being how easy their permeable defensive unit was making things for the sub-editing team at the Leek Post & Times. Your Hobo would never be so obviously pun-thirsty, of course. Ahem. 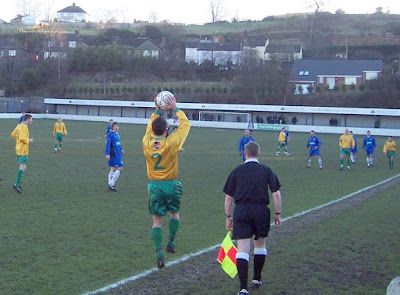 Confidence is, you would think, in short supply for Leek, whereas the Mariners have plenty to buoy them*. Currently third in the division, they have enough games in hand to overtake both North Ferriby United and Frickley Athletic to shore up* in the single automatic promotion spot, should their form not desert them in the remaining 3 months. Resurgent since Alvin McDonald’s arrival as manager in the summer, and with the added psychological bonus of a very recent 3-0 League Cup win over Leek, all would seem to point at an easy away win, the cut-up pitch and freezing cold perhaps tapping the stuck swing-o-meter slightly back toward centre.

However it is Leek who start the game all the stronger, creating more, their pass and move working quite effectively. The first Marine attack of note soon ends up back in Leek’s favour, requiring Andy Ralph in the away goal to make a sliding tackle 35 yards out to prevent an easy stroll to goal. In the 24th minute, Ralph’s grateful leg again keeps things level, as a Carl Frost overhead kick rebounds off said limb on the goal-line and out to safety. Marine then push straight up the other end as a Leek clearance, suggesting a rapidly deflating air-bag has replaced the defender’s head, drops kindly for Danny Byrne in the area but he shoots straight at the alert Adam Wilkes between the Leek sticks. 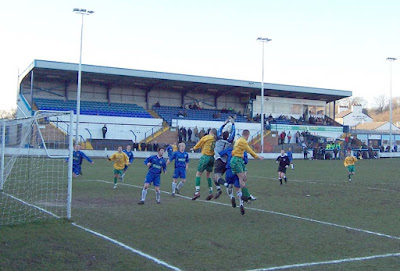 Marine are showing signs of being a side with plenty about them, as the table suggests is the case, but without a collective internal compass on this occasion, their first half passes making like a RyanAir route, being a pretty uncomfortable journey for all concerned and going nowhere particularly useful. Skipper Nicky Young looks to be Marine’s man-most-likely-to, despite being marshalled closely by Paul Booth, whose tight blonde curls give him that much sought after look of the ‘grumpy myopic lamb’.

Indeed, it is Young’s determined run to the by-line, despite the increasingly baaah-wildered looking* Booth’s attentions, that forces the corner which leads to Marine, by now rather unexpectedly, breaking the deadlock in the 51st minute. The corner floats inwards for Adam Farley to rise above a packed, but otherwise petrified, Leek penalty box, the bodies motionless as though all trying to ascertain the personal significance of a nearby car alarm. The ball drops calmly over the keeper, brushing the underside of the bar en route. 1-0.

“Don’t sit on it”, yells Marine assistant boss, repeatedly shouting “tight, tiGHT, TIGHT” for the next 5 minutes, on one occasion being met by a look from one of his midfield charges that says ‘Jesus, enough already’, to which he adds a further “Fuck off. Get it tight”, which they do, to a certain extent, for the next quarter of an hour, towards the end of which Ralph is required to bound like a Michelin Man in a successful attempt to intercept a lob with his puffed-out, lorry-tyre-like chest. 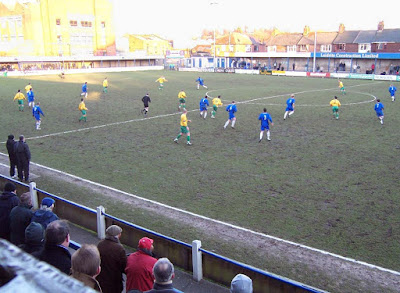 However come the 69th minute, the home side finally grab the equaliser they deserve, as I time my return from ‘brief absentia’ (err, I guess my leak at Leek has now been leaked*) perfectly. As I look up from a typically troublesome button-fly I am able to capture, in my now slightly relaxed vision, Rob Hawthorne thwacking a shot more in hope than expectation in the general direction of goal, a wicked scoop off a defender’s leg sending it past Ralph who has just that moment committed himself to an Eastward hoe.

10 minutes later he is almost beaten again, a break and shot causing the ball to spin out to just beyond the left corner of the box. Dave MacPherson, sporting a face that appears to be a morphed quiz-night composite of Danny in ‘Withnail and I’, Finchy from yer ‘Office’ and Frank Worthington before he fully acquiesced to life as an oily spiv, unravels his challenger by handsomely pirouetting, as though acting out a Kate Bush video in front of a mirror, to fire a shot that brings a hard, pinchy ping from the upright. It rebounds out harmlessly, allowing him to relax off his pointe shoes back onto his heels, and possibly contemplate an after-match Camberwell Carrot, at least I’d like to imagine so. With two minutes to go, a similar shot from the other side of the area, from Ashley Woolliscroft, skids dishearteningly wide. 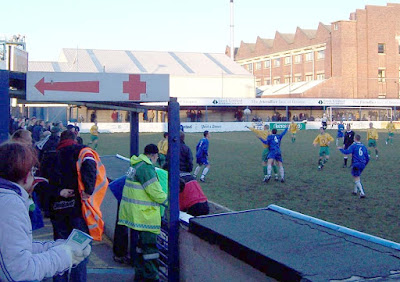 In the final minute, Leek believe they have won it as they make the most of Marine’s defence being typically late, and I mean Diva-late, to the second ball, turning it home from close range. However this is met with not only a rather controversial outstretched flag on the far-side, but also a roundtable discussion for the breached Marine defence, Andy Ralph shoving right back Neil Murphy around the 6-yard box like a gorilla trying to establish his alpha-male credentials. Two of their team-mates stifle their chimpy giggles long enough to act as mediators.

This show of passion meters itself out to the rest of the squad and the travelling Marine support, who bellow “Yellows” (in honour of their away colours) to a volume that seems beyond their grouping of 30 or so. This appears to suck the ball in their direction for a Marine corner, but it comes to nothing. If it had, it would have been more than a little fortunate. Some Leek followers feel even a point was too much for the Mariners to take away, one of them yelling at the ref that “it’s no wonder we’re bottom, wi’ pricks like you”.

Tough at the top? Sometimes, but stranded at the bottom seems much more troubling.

*The Hobo would like ask his small band of increasingly disillusioned readers to forgive him, despite being acutely aware that he does not really deserve it. He would also like to apologise to all those at the Leek Post & Times whose names were taken in vain.
Posted by skif at 6:37 pm