It’s not the same as it used to be, some say of the FA Cup. It all depends on where you come from, I guess, where your footballing interest lies. My interest in this season’s competition, with the completion of the 3rd round ties, is now on the wane. For others, it’s only just begun. With the larger rewards available in Europe, it is hardly surprising that the big clubs value the climb toward 4th place and a Champions League qualifier rather than the chase for a shiny mug that only gets you going in the UEFA Cup. The lust for lucre is strangling the life out of the famous old cup but then again it’s calmly wrapping a piano wire round the neck of the Premiership as well. The dream of the many is now only potential reality for so very few.

While the latter stages of the FA Cup may now limp to the same old conclusions come May, it remains a beacon of hope for supporters of lower level sides. That is its heart, and their involvement allows it to remain beating.

At the start of each season, I always make sure I know what dates the cup rounds are, particularly the first round proper, as that is what I crave, as well as league success, is a cup run that will allow my team to face a professional side in a competitive fixture. The two times Havant & Waterlooville have ended up in the first round, we’ve faced fellow non-league opposition, albeit from the Conference National, and lost. Each year I hope we’ll get, I don’t know, Hartlepool away, maybe even win. Obviously the third round would be nice, but let’s toddle before we can scamper. 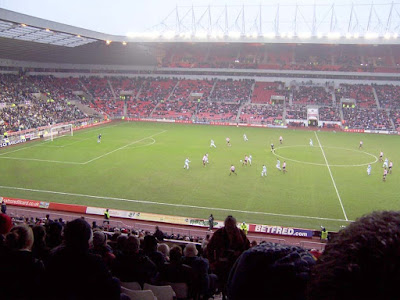 For me, the giant-killing (relatively speaking) can begin at the Preliminary Round in August. As a neutral, I’d choose an FA Cup tie, preferably between sides that would not ordinarily meet, over a league game any day. Today, I am taking that ideal to an extreme, travelling all the way to the bitter North-East to make up for H&W’s cup deficiencies to watch a team from our level, Northwich Victoria of the Conference North, achieve the ultimate – away in the 3rd round to a Premiership side. The prestige. The big day-out. The moolah. Ideal.

Not that Vics are entirely happy with the fiscal side of things. Today’s tickets are only a tenner, rather than the usual £25-ish, which reduces their potential earner somewhat. Considering the Sunderland season ticket came with a free piece of card pierced with a single pinhole through which to watch the games, it may have been considered unempathic and miserly for them to charge their long-suffering supporters through the nose for what could well have been their nadir. Indeed, I am here solely for the potential of the first non-league toppling of a top division side since Sutton United did for Coventry City 17 years ago. If there was ever a Premiership team that looked soft for it, it would be this year’s mangy Black Cats.

It is a fear that is very real amongst the Sunderland support. On the Tyne Wear metro between Newcastle and Mackem country, there are no statements of bravado, none of the usual “I expect us to get at least 8” type bluster. Instead you see the pallid faces, one of the younger of which is made all the paler for a Michael Eavis-like, snood-demanding, ginger chin beard, ponder the possibilities in a manner which betray a temporarily impressive sphincteral grip. “We’ll play ten behind the borwl and Stead up frunt, that’s how confident ah ahm”, “If they just get int’us early daws, we might struggl’” and the like. Thank goodness they stagger their heavy gulps, otherwise the train may well have derailed. 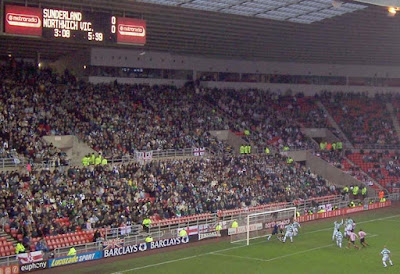 The 3,500 up from Cheshire and packed together (see above) are in fine voice. The 16,000 who consider a tenner a reasonable price for staring into an abyss are less vocal, but are more numerate than might perhaps have been expected, particularly on such a murky, drizzly day. Thankfully for them, they settle the nerves early with a 7th minute follow-up strike from Neil Collins. Already the away support know the game is up and the chants deriding Sunderland’s disastrous campaign begin and, as with Chasetown’s support at Oldham, it almost certainly isn’t the regulars who are in charge of the song-sheet today. The rather ungallant “You are going down” is a favourite throughout. After the first run through, a chap behind me snorts with a derision cheered by their early lead, his chuckle rescinding to a wearily sighed “We are though”.

After this first goal, and indeed before, Northwich never quite look the part as potential giantkillers and although they cause Kelvin Davis to stretch on three occasions, Sunderland take it with a very adequate 3-0 scoreline, Dean Whitehead slotting home on 42 minutes and Anthony Le Tallec finishing the job in the 69th. Elsewhere Liam Lawrence drops a lob onto the bar, and Jon Stead hits the post, but while this and the several saves Kris Rogers has to make allows them to dominate, to call Northwich outclassed would be an injustice. They don’t have enough for a scalping, but plenty to keep their heads held high for the coming weeks.

Indeed, Sunderland on several occasions show why their Premiership season has flat-lined quicker than an nonagenarian speedballer. Stead’s confidence in front of goal looks shredded, with no Crouch-esque seal-breaking flurry looking imminent. Indeed when his second half shot rebounds off the post, you half expect his cherubic mush to slowly crack into a flood of ‘but-I-want-sweeties’ tears and a huge snotty bubble to distend from a nostril.

Thanks for the link - I've added Hobo Tread to my blogroll.
All the best,
Sam
Czech Football Daily

Plenty of Toon fans in the Northwich Victoria end, as I understand it.

Also liked your subtle reference to "the bitter North-East" - I'm assuming you were referring to the weather, but also getting in a sly dig at the Mackems' part of the region...

Ah the presence of some Toon mob would possibly explain a great deal.

As for my comment on the weather, I'm afraid you over-estimate my powers of subtlety. I'm nothing if not impartial in these things.