A year on the tread then, and about 50 fixtures covered since the debut Hobo post. A very innocent and naive effort compared to the verbosity that has come with age. We began with Bangor v Caernarfon, so what better way to celebrate the maiden annum than with an appraisal of Caernarfon v Bangor?

Being a bank holiday, it’s pretty quiet in Caernarfon, the bigger shops open to attract those at a loose end. Above the smattering of shoppers picking through the debris of the post-Christmas sales frenzy is a similarly diminutive cluster of gulls (it’s a public holiday for them too, I guess), sounding their echoey maritime squawk as they fly in from the Menai Strait that separates this North Western tip of Cymru from it’s Anglesey annex. They swoop hungrily toward last nights Styrofoam burger punnets, over both the Castle and the statue of former MP for Carnarfon Boroughs (1890-1944), David Lloyd George, who stands defiant with a raised fist that suggests a Stoogian “Why I oughta…” used to echo across the Westminster despatch boxes between the wars. 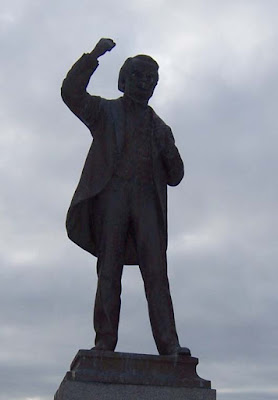 Beneath the swing-bridge behind the Castle swans drift quietly, respecting the post-festive calm which becomes such an ornate place as Caernarfon. It is a handsome town without ostentation and, seemingly, home to very little crime, with prevention schemes tailored to the individual. A sign on the Animal Welfare charity shop door is fairly typical of a small concern, stating at the bottom “We Do Not Want Thieves On The Premises”. However, the large, bold type at the top exclaims a most ungeneric ‘KEVIN!’.

So it would seem that amongst this idyllic scene are pockets of building agitation and this is much the same at Caernarfon Town’s Oval ground, which in itself is home to an quite exquisite view, over the far-end terracing, of the Snowdonia peaks that prick the clouds on this overcast afternoon. It is also home to calls for the heads not only of the management but also of the board. There is polarity in opinions though, the rose-tinted faithful-til-the-last responding to the calls for change with requests for people to volunteer their services for the club, to work rather than to moan, “Show me a club where everything is fine…” reads one. This rallying call is grounded with a thud, “Show me a club with a 2 man board. Show me a club with a manager who has won 10 games in 60. We don’t need workers, we need a new board”. 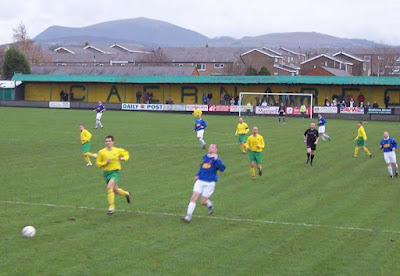 They are not alone in hitting a sticky patch as their local rivals, today’s opponents Bangor City, as well as a majority of the Welsh Premier League, are finding things financially tough. Bangor recently lost manager Peter Davenport, who cited the club’s “failure to move forward” as the catalyst for his resignation. They are due to build a new ground that will replace the dilapidated Farrar Road but have been unable to get the necessary planning permission to make it UEFA compliant, which would make the whole effort seem rather pointless. While Llanelli and TNS can afford to play professionally, most of the rest of the League of Wales does seem in a perilous state. Those that fought to remain in the English pyramid system will probably feel as though their court battles with the FAW have been vindicated, particularly as the Association seem to show little interest in their national league, and the kind of sponsorship that will improve facilities and standards remains elusive.

Despite being two clubs with concerns about finance and, in the case of Caernarfon, league status, the game today sees the League of Wales highest crowd of the season and over a hundred more than turned out for the reverse fixture at Farrar Road a week ago, where Bangor nicked the points with a 89th minute winner. Plenty at stake today then. 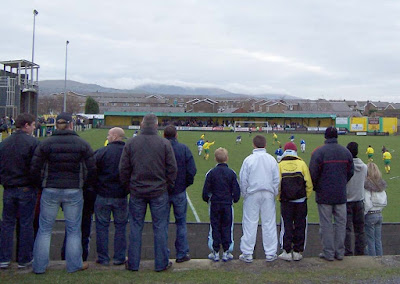 Last year I spent a bit of time in my short report appraising the presence of Clayton Blackmore’s wide-load in Bangor’s right back position, and he returns to their line-up today. Despite being neither captain nor caretaker, he spends his time directing the Bangor traffic as well as providing a mercurial presence in midfield. Indeed after quarter of an hour a crisp chipped pass from the bleached veteran and a further flicked-on lob, Caernarfon keeper Paul Pritchard has to race out to block. Ricocheting toward the touchline, a Bangor player gets to the ball first but from a tight angle he sends it skating across the goal behind Pritchard’s desperate leap.

Moments later, Caernarfon swing a corner all the way past the goal, an attempt at a point blank bullet header showing some pretty shoddy time-keeping. It is much this way for the next 20 minutes, end to end stuff without either keeper being unduly troubled. However in the 38th, a rasping Caernarfon shot races to the left of goal, inducing a flattering gasp from those massed behind the goal. Bangor counter-attack immediately. A brilliant cross into the 6-yard line for a header (at knee height) causes the ball’s trajectory to make like an upturned ladle and drop over the bar. As such they go into the break level but with Bangor probably the happier. 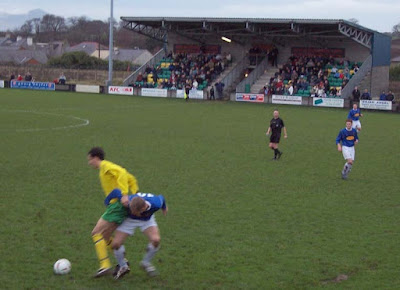 The second half begins in much the same way as the first, although Bangor start to impose themselves around ten minutes in, a decent penalty shout coming when a decisive sliding block tackle appears to include some arm in it’s aftermath. A minute later, Pritchard is required to make a vital claw away, a Bangor forehead waiting eagerly and virtually unchecked at the back post.

Caernarfon re-impose themselves just after the hour and finally make the breakthrough on 71 minutes, Bangor keeper Andrew Price coming to the edge of his area to punch away above clashing heads. His clearance though falls to Jason Sadler, who sweeps the ball over all those collected in the D and into the empty net. 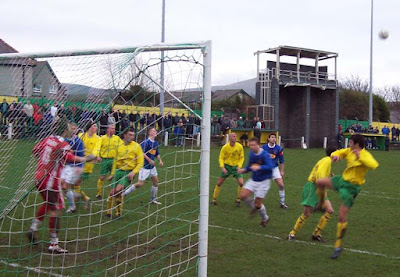 Bangor have no choice then but to push forward and create several opportunities, winning a free-kick 20 yards out, dead central, in the 88th minute. It is the bulky figure of ‘Clayts’ who steps up and curls a delightful shot toward the top left hand corner, its sweetness matched by Pritchard’s athletic leap to paw the ball away. It seems to be a match-saving effort but Bangor, as with the Boxing Day tussle, leave it late to break Canaries’ hearts, a corner swung in high and underneath the crossbar is nodded home by skipper Paul O’Neill, and a good third of the crowd kiss the blackening sky.

A reasonable game then but nothing on show from the Caernarfon side to silence their critics. Indeed one post-match comment suggests the management will see this result as excellent as “after all, we’re unbeaten in 2006”. Despite such jovial stats, they are now staring down the barrel of relegation to the Cymru Alliance, although there is plenty of time for them to sort it out, particularly with Cefn Druids looking uninspiring and Grange Harlequins now completely sans cash and carrying a hefty goal difference of -37. Caernarfon (-2) will not though want to be relying on the Quins’ slow death nor an unwillingness of the part of the eventual Cymru Alliance champions to accept promotion, as was the case last year. Put simply, they are underachieving and answers to address that problem must come from within.

I was at the match (Caernarfon fan) and it was terrible! Noticeable problems up front where there was a definite lack of teamwork between our two strikers - they were playing like strangers. Gutted that they popped up to score an equaliser so late on, but we can't really complain.

Aye, my use of the term 'reasonable' to describe the game could well have been a little generous. Ta for your footnotes!