Barrow-in-Furness is largely thought of as typical of an industrial northern town: dank, tough and without the requisite attractions to warrant a quartered postcard. The first image of Barrow I get is of one knee-high set of lads yelling “I’m going to batter you, ya tossuh” and “Fuck off Brian” in the direction of a taller collective ambling derisorily into the distance.

Perhaps, though, it is not about the destination with Barrow but more about the journey. Tucked into Cumbria’s chinny flange, the way to do it seems to be by train. Skidding along the northern banks of Morecambe Bay, this method allows views that have a subtle beauty rather than immediate dramatics. Despite being just beneath the sweep of the Lake District national park, the arable land, crisp air and heart-stopping sea are a handsome distraction, along with the stoic stonemasonry of stations with names like Cark & Cartmel. Cambridge City may not be as enamoured with their journey to unknown territory, although being this far north does allow for a collection on the team coach of enough nasal raw material for several decent quality black puddings.

Being like a pencil mislaid behind England’s footballing ear, Barrow are able to attract a decent size crowd for their level, with no pro club within a 50 mile radius (particularly in that wet bit to the left). They are a club with history, which probably helps, and spent 51 of the last century’s middle years in the football league, albeit scowling around the mid to nether regions of the Third Division (North) and Division 4. Mind you it was only 5 years prior to their unsuccessful 1972 bid for re-election, and replacement by Hereford, that they achieved their highest league finish, 8th in what we now know as League One. In Holker Street, they have a wonderful old-fashioned ground, that stands as testimonial to their former life. 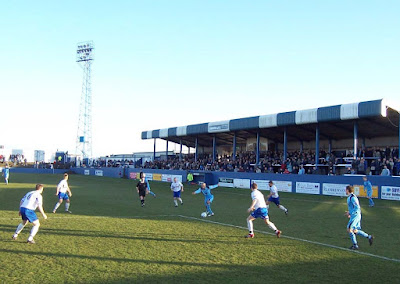 Cambridge City might consider themselves unlucky that they were never elected to the Football League after finishing 2nd in the Southern League in 1971, but with near-neighbours United taken into the pro ranks the previous year, they stood as much chance of reaching the promised land as a limbless heretic on a rusty unicycle, this despite finishing ahead of the U’s in 8 of the previous 12 Southern League campaigns. While United might only have cause to remember the rivalry now they find themselves back in non-league circles, City’s ire appears never to have subsided, particularly now merger talks threaten the autonomy and identity of both clubs. With their Milton Road ground long ear-marked for redevelopment, City appear to have more to lose in this respect.

Barrow themselves can sympathise with the bare-cupboards predicament of the Cambridge clubs, the debts accumulated under a previous regime seeing them demoted from the national Conference in 1999 and staving off liquidation by the skin of the current board’s teeth. Now consolidated at the level beneath, Barrow started this season in impressive style but a slip-slide down the table and a managerial change later and they find themselves 14th in Conference North, while the visitors currently lie 10th in its Southern equivalent. The Trophy makes any game difficult to call, but the length of the Lilywhites' journey would seem to give the home side a decent advantage. 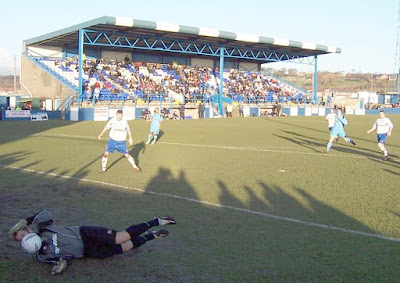 However, it is Cambridge who make the most impressive start, despite squinting into a winter sun so bright several revelational deities are seen coo-ee-ing from within its lustre. Indeed, only 13 minutes have passed when Barrow’s defence sign up for week one at a line-dancing beginners’ class, their formation long forgotten as the backline start to run back and forth as though miming stir-crazed panic at being locked inside a palatial dining room. This elaborate roustabout, although reportedly an improvement on their walking-into-the-wind routine, nonetheless allows Josh Simpson plenty of time to pick out the far corner from 20 yards relatively unimpeded. They are breached again 4 minutes later, but Simon Bishop gets just enough on it to divert it past the post.

While the action goes end to end, the real penetrative stuff comes from Cambridge, Barrow’s defence gradually being made to look like a bunch of unshaven Sunday drunks asleep on a picnic table. On the half hour though, they pick up their attacking tempo, if only to silence the increasingly agitated “Gaaahs” and “Awwwwws” coming from the popular bank.

Hidden up in a corner of this densely populated terrace are a pocket of about 50 City fans, armed with a flag and a snare drum, the hotheaded-small-bloke-with-an-inferiority-complex of the percussion family. They make the most of a break in play to not only request a wave from manager Gary Roberts but also vent their feelings on the apparent sub rosa activity between their board and Uniteds. “You can stick your fucking merger up your arse” they sing in as scholarly a fashion as they can muster. “We’ll never share the Abbey” they continue, finishing with a defiant “City ‘til I die”. Rather poetically, they follow this medley with a ‘guess the weight of Gary Roberts’ competition. “13 stone?”. “Naaaah”. 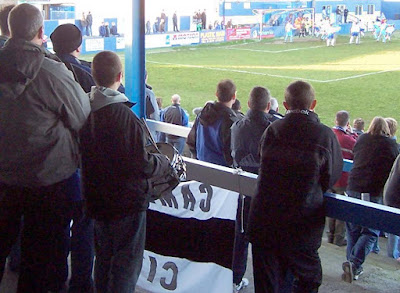 I watch Barrow try and gather themselves into some kind of headway from the tea-bar queue, the resultant brew being possibly the worst that British football catering has to offer. Admittedly, for the "tea" this is rather like turning out for a Timmy Mallett-lookalike contest and leaving only with the ‘Biggest Prick’ spot-prize. At least the powder teas you sometimes get advertise their foulness by congealing into a surface-pox. The hobo tongue, on this occasion, was not fore-armed.

Keen to cleanse the system, the gutter-behind-a-wall urinals is the half-time port of call, where the floor is festooned with tissues, coke cans and an empty quarter bottle of Napoleon French Brandy. It seems it has been one of those seasons. It might also account for Barrow’s heavy-legged defensive display.

Despite continued gaps at the back, the second half sees a much improved Barrow as the action becomes genuinely end-to-end, with Steve Flitcroft smiting the ball onto the underside of the Cambridge cross-bar, although it bounces kindly for keeper Danny Naisbitt, who'd been beaten all ends up. This acts as a boot to complacent Cambridge arse-cheeks, Dale Binns again showing tremendous spatial awareness, setting up a shot from Robbie Simpson that sails across the goalmouth. 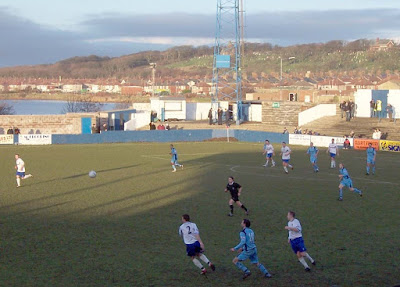 Briefly tuning into see what BBC Radio Cumbria, who are covering the game live, have to say, a free-kick awarded in the 71st minute is described as “probably too central to get anything from”. Said set-piece is curled out wide to the left, where it is calmly nodded across for Mike Rushton to supply an arrow-like finish with his forehead.

While a Tuesday night trip to East Anglia would not exactly be the ideal for Barrow, particularly with a much more logistically pleasing home game with Southport in the United Cooperative Trophy already arranged, they now find themselves clinging on, as Cambridge pile on the pressure in the last 5-10 minutes. A typically bamboozling run on the left-flank by Binns allows him enough space to float in a gorgeous shot, but Bishop keeps up his excellent form, reacting quickly to stun the ball into flopping over the bar. The Barrow keeper is in no mood to tolerate shirkers on his side either, asking prostrate back-clutching substitute Andy Hill to “Fucking get up you fanny”.

However, as 4th official Mr Eaton sashays the extra-time board around like a Generation Game hostess, a typical scene resumes, Cambridge allowed to slalom around leaden Barrow pins, the fresh legs of sub Michael Gash making him a particularly nimble thigh-dancer. Rounding Bishop, he slots home and the small pocket of Cambridge fans leap about a terrace that is still and silent but for their delirium and the sound of Barrow heels being turned upon.

"Being like a pencil mislaid behind England’s footballing ear, Barrow are able to attract a decent size crowd for their level..."

"While the action goes end to end, the real penetrative stuff comes from Cambridge, Barrow’s defence gradually being made to look like a bunch of unshaven Sunday drunks asleep on a picnic table".

Superb stuff, Skif. You have the uncanny knack of making reports about matches I don't care about compelling reading.

Well thanks very much.

Think I'd best avoid sketching out games you do care about, as I am convinced they would disappoint.

Aye you've pulled out all the stops there Skif, all right, I think your reports get better the more distant/ outlandish the location... It takes an effort to write about football without resorting to cliche, I sometimes find- but by conjuring up some gloriously apt but unexpected images (defenders like Sunday drunks indeed) you have captured the attention of this neutral reader (although I have to admit a certain soft spot for Barrow for reasons which currently escape me). It helps that I really can't get enough of match reports which talk just as much about the pies, chants, journey there etc as the match itself.

People are being very kind. It's much appreciated. I must admit I spent a little longer than usual on this one as recent reading has inspired me to try and pull my finger out.

I believe I do teeter on the precipice of the hackneyed, and have often been known to plunge in regardless. Thank you though for your kind comments suggesting that this one, at least, resisted the temptation. It had to happen one day.