If any club should have benefited from Havant & Waterlooville’s decision, at the end of last season, to disband their youth and reserve set-ups, it should have been the Hawks themselves. As they currently occupy one of the top spots in Conference South, it would seem this controversial decision might have created a smaller squad but also, with fewer playing opportunities, a hungrier one.

Hawks manager Ian Baird never saw the value in the reserve and youth teams, and it’s a fair appraisal. While I used to enjoy watching the football played by the youth side, their success was never the catalyst for the young players to step up to the senior team. There were mutterings, even when two successive generations of the youth squad swept the board of Hampshire FA league and cups, that the Hawks were merely breeding decent Wessex League players. It would certainly appear to have turned out that way, as a knock-on effect of the H&W streamlining has been a Diaspora that has centered on what is essentially Portsea Island’s second side. 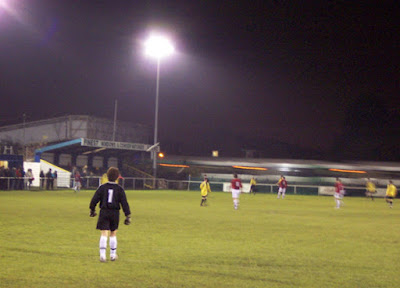 The joint managers of that reserve/youth team, Alan Smith and Bobby De St. Croix, are also here who, along with Craig Stafford, are the latest in a long line of duo and trio managerial partnerships at the Moneys helm. Astutely the many gaffers also put leaders out on the field, wise old heads such as Miles and Guy Rutherford adding their experience to complement the exuberance of the H&’Dub nearly men such as the terrier-like Shaun Kerridge, who has the look of a bonsai John Terry. Moneyfields season is going fairly well, comfortably in mid-table, and with their current playing squad should improve as the season goes on.

Tonight’s opponents Andover are having an even better season, lying in 5th, 18 points behind leaders Winchester City but with 8 games in hand including this one, and so would have been looking to use tonight’s game to make up some ground on the rich bitches from the county capital. 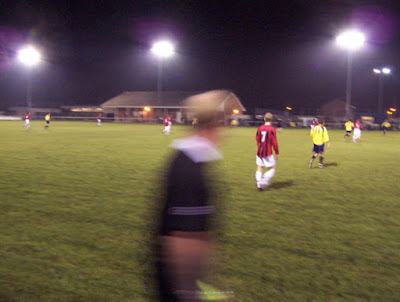 It’s a case of Tuesday night and the gates are low here though, with only 43 littering the sidelines, Moneyfields' lowest of the season. Their average for this season is 96, but this figure is skewed slightly by their freakish record attendance of 250 against Fareham Town back in October. It is difficult for any club born within the chime of Pompey bells though, as football thinking in South East Hampshire does tend to gravitate towards Fratton Park, which lies just over a mile away from here.

The ground is not exactly ideally arranged to appeal to the casual supporter either, with their small stand jammed into a dank corner which affords better views of the trains that pass intermittently within yards of one of the goals than of the football. Furthermore this a young club, formed in 1987 as Portsmouth Civil Service reserves before moving to the Moneyfields Sports and Social Club in 1994 and taking its name. Representing a city is an easy catch-all but naming yourselves, essentially, after a road is certainly a more niche-market approach. Even so, some of tonight’s potential crowd, even those living in Moneyfields Avenue, may have considered staying in the warm for Chelsea v Liverpool on the box a better option. They were wrong to do so.

The game certainly sets off quickly out of the blocks with Moneyfields going one up after only 3 minutes, with a rebound from a saved shot allowing an inelegant scuff into the net. Just over 5 minutes later though Andover are level, the ball hit into the roof of the net from an absurdely acute angle on the left. The old H&W boys certainly get stuck into it, looking more toned and less gruesomely acned than I remember, and certainly committed in their tackling. As a result the remainder of the first half largely belongs to the home side but despite the penetrative moves forward their finishing is far from clinical, and they remain on level terms at the break.

However, in the second half, Andover come out determined to make a greater fist of it. In the 53rd minute, they have the ball in the net via a defender’s hand, only to notice that they will have to take a penalty rather than celebrate their goal. Thankfully, the trundling spot-kick goes between keeper’s hand and post to confirm their 2-1 advantage. 3 minutes later, they add a third, which finally galvanizes Moneyfields into action but the Lions defence stands firm. Taking a break from making dents in nearby brickwalls with their heads, the Moneys management make two changes, with former Hawk Glen Knight bringing his Lampard-like midfield presence back to the side after injury and Adbouis N’Doye making his way up front. However with Andover stretching the margin with a 4th goal in the 73rd minute, it appears too little too late.

With the scoreline rivaling imitation in the flattery stakes, the cry goes up “c’mon, let’s get our heads up” and within a minute, Moneys pull one back. Storming up on the flanks, a cross flicks off a defensive Andover head toward the net, and N’Doye slides in to make sure the keeper doesn’t complete a dramatic goal-line scoop. There seems some doubt as to whether the ball had already crossed, but there is no uncertainty a further minute later as 'Pabs' runs behind the defence to launch a sublime finish into the top corner, nor is there in the 79th minute as he hammers an breathtaking equalizer with his head. 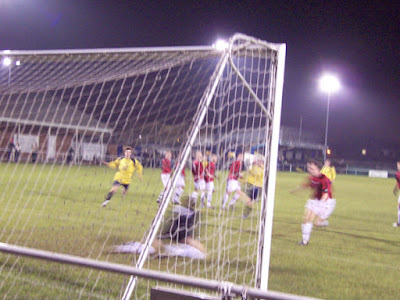 The linesman has his take on the scenario, whispering “Hat-trick in 4½ minutes, if you’re interested” in my direction on noticing the intensity of my hackish scrawl. I’m more than happy to go along with that, as N’Doye was lively, quick and reinvigorated his demoralized teammates, not with empty words but with actions. In short, a thrilling virtuoso performance that single-handedly achieved an astonishing comeback.

One of Moneyfields’ more aged followers outlines his expectations for their weekend fixture with Bemerton Heath Harlequins, “9-5! Not this boring stuff”, he beams as he skips through the gate. Elsewhere Andover’s supporters are left to apply ointment to their eyes and grazed chins.