Being that I hadn’t expected to be here until about 45 minutes prior to kick off, my pre-match research would have been delighted to have been described as sketchy. Subsequent awareness of the situation at Grange Harlequins means, however, that there is more to the day’s scoreline than perhaps meets the eye. Not that I was fully aware of today’s scoreline until I happened to catch S4C’s Saturday evening programme, in the native language, of the day’s League of Wales highlights, as my dash across town meant I missed 10 minutes of this game. Matching the score to the game was easy though, as Caersws were certainly worthy of such a comprehensive win, or rather Grange Harlequins looked every bit the haplessly thrashed.

However the Harlequins can perhaps be excused for such a lacklustre display as times have certainly been turbulent for chairman Daniel Pinches and those in involved with the club in the last 2 weeks, but it is a situation that has been building all season. Quins replaced the relegated Afan Lido in the Welsh Premier for this season despite only finishing second in the Welsh Football League Division One. Ton Pentre’s ground could not meet even the undemanding Welsh Premier standards, whereas Quins usage of the Cardiff Athletics Stadium at Leckwith gives them 2,500 seats which probably also makes them UEFA compliant. Mind you their ambitions for this season are probably a little less lofty after they lost out on a sponsorship deal just prior to the start of this debut Premier campaign. Former Welsh rugby international Martyn Madden had been set to plough £15,000 into the club but pulled out at the 11th hour, and they are now struggling to keep up contracted payments to the players. 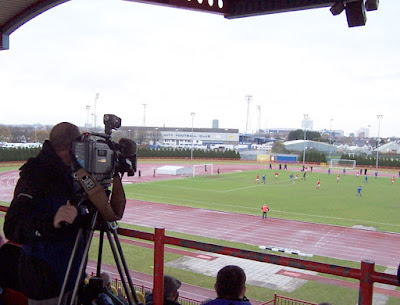 The upshot of all this has been that within the week and a half prior to this game, 6 players including player-boss Paul Giles walked out on the club, with former assistant Mal Camilleri put in charge of what is left of the squad. Being only 4 points outside the relegation spots, it’s going to be a tough ask for Camilleri to keep them in the top flight. The club take great pride in being the only Cardiff representative in the Welsh Premier and the first since the merged UWIC/Inter Cardiff (who had some early LoW success as the sponsor-friendly Inter CableTel) side were relegated in 2001, but this of course means they have to work even harder than most in Welsh football to attract supporters as Cardiff City’s Ninian Park is quite literally just across the road.

The first thing witnessed when attempting to enter through the door beneath the stand pretty much sums up the Harlequins experience for the day. Not expecting any further spectators, but unwilling to give up his post until he is sure, the chap guarding the table which masquerades as the single necessary turnstile, is craning himself into an s-bend through the glass-door leading out to the track to watch the play. Receding back through the gap he exclaims “Bollocks, they’ve bloody scored…[on noticing his late customer]…oh hello”.

Getting yourself into an athletics stadium is a quick way to get yourself floodlit, but needless to say watching football in a facility not built for it is never ideal. Furthermore the action appears even further away here than I have come across at fellow track and field facilities at Grantham, Newport, Croydon, Barry, United Services Portsmouth and Connah’s Quay or even the stock-car track at Cowdenbeath. Mind you, the views of the play from the back of the stand are pretty good for all that and afford a handsome view of the Cardiff skyline. Indeed visitors, both traditionalists and modernists, getting misty-eyed for a proper footballing facility are catered for with the view of Ninian Park at close quarter, while the cantilever spikes of the Millennium Stadium jut like undernourished elbows above the city just further behind.

Indeed, they have added ‘Cardiff’ as a prefix for this season so as to allow for easier geographical positioning, which might mainly be for the benefit for the people of Cardiff themselves. Certainly addressing issues of identification with a club is a wise consideration with such a significant neighbour. Mind you big names have excelled here at Leckwith too. The honours board, positioned with apparent ceremony opposite the toilets, lists that among the stadium record holders are Messrs L. Christie, J. Baulch, D. Grant, S. Backley, R. Black and P. Elliot as well as Ms. T. Sanderson.

As I take up post, a Caersws shot whistles within a millimetre of the crossbar. It looks one-sided already and despite the odd break, it remains that way for the next 80 minutes. The Bluebirds cause continual problems on the flanks for Quins, particularly from set-pieces with goal-line clearances and stretching saves required to keep them at bay. The Quins do manage to get the ball into the back of the net however, in the 41st minute, but only as a resigned impulse with the ref having taking account of the goalkeeper’s personal space issues from the cross.

After this brief lull, Caersws begin the second half strongly, with Andrew Davies taking the lead to 3 in the 49th minute. It is a tremendous finish, as he calmly explores his options before lifting the dismissive curve of his shot out of range of all the milling defenders and the gloveman. Then straight from the restart they treat an offside trap with disdain, the striker’s daisycutter wheezing past the far post.

In a brief flurry of excitement for the home crowd, the Caersws keeper gets into a hell of mess taking too long dribbling back into his area, the pressure forcing him into jamming his hand down on the ball, although the referee shows only a lenient canary-hue. It ruffles Caersws not a jot as they stun the impact by delivering the ball straight back up for Ross Stephens to finish.

There is a ready wit about Caersws’ play, as they show spark and some quality passing but it is perhaps the tragic, but earnest, ineptness of the makeshift Quins that makes these traits more readily apparent. Davies completed his brace as, after a ball lofted in from the right draws a defender and the keeper’s idle gaze, the header back across invites an easy forehead tap-in.

Towards the end, as the floppy-legged, disheartened Harlequin defenders allow themselves to be caught in possession again, an exasperated supporter shouts aloud “It’s like the Alamo”. Should Quins now be overwhelmed this season, the Leckwith Stadium may well find itself standing as a shrine to their struggle, so we should hope, I guess, that their misery does not end up being exacerbated by Ozzy Osbourne drunkenly pissing up the side of it.

Glad to read you actually got to see a game this time. Hope you didn't travel all the way to Cardiff for the Caerau Ely game too ie have you been staying down in that neck of the woods?

The lady and I were down there that weekend visiting friends, and whilst they did shopping, I did the off. Caerau was the first pick, but the Leckwith is en route between there and the city. I'd noticed they were putting the flags out there on the way to Ely. Very handy. Else it was a pub and a mute Jeff Stelling for the afternoon.

So not a deliberate trip there, as such, but as my next couple of posts will show, I've been hefty on the hoof this past week or so.