Those who make a habit of visiting football stadia often have a system, their own rules as to what ‘counts’. More pro sorts than me, particularly those pursuing the ‘92’ (not a priority for this hobo, although the Conference 66 is within reach as it happens), need to see a full 90 at a first-team fixture to ‘count’.

I am easier to please, as long as I can see inside the place, that will do for me. For example, I have stood outside 3 of the Prague clubs, Malmö FF and FC Kopenhagen, but the fact that I was able to steal inside and hover suspiciously around the corner-flag at Stadión Viktorky means Viktoria Zizkow can take their place in my anal-retentiveness betraying list on the right. (I should perhaps point out that a Zizkow game was not going on at the time – there are limits to my trespassing cheek). 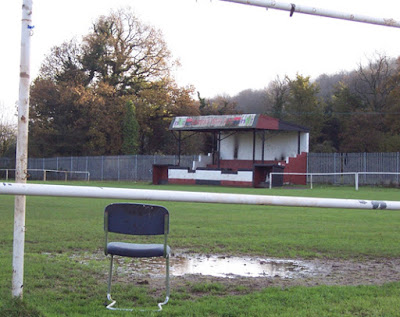 As such a postponed fixture in the Macron Welsh League Division Two is not the disappointment it could be as Caerau Ely’s third tier status in Welsh football means only wide railings provide a barrier to a hippo-like roll about in the goalmouth. The committed streaker needs no audience.

So, as far as I’m concerned I’ve got what I came for, and besides the game probably wouldn’t have been a classic. That’s not a comment on the standard, more an acknowledgment that the facilities on offer for the goalkeepers suggest a dour midfield slog had been expected.
Posted by skif at 7:40 pm