Ah the magic of the cup, a phenomenon spoken of in hushed tones for many years. Essentially, the magic of a Football Association administered knockout tournament that provides entry into European competition. That is the bare bones of it really, but it is a phrasing that no longer applies just to the glorious old FA Challenge Cup.

The UEFA Regions Cup was inaugurated in 1999, with the first English side appearing 2 years later. From 12 applicants the FA put forward the Kent County League as their representatives for 2002/03, but from the following year UEFA required that only the winner of a National Regional competition could enter, which galvanised the FA into creating the National League System Cup and, sadly, put paid to the keenly contested games of ‘Operation’ between the league secretaries at Soho Square. 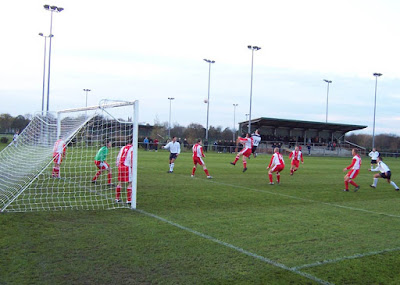 The basic tenet of the UEFA Regions Cup, and therefore the FA NLS Cup, is that it should be contested by players who have not held a professional contract at any point in their careers. Therefore the FA restricts the competition to the 42 leagues at the highest level of senior amateur football (Level 11 in the great scheme of things, if you think of the Premiership down – see here), of which 22 took part in the initial 2003/04 contest.

Here at the Liverpool County FA’s ground, today’s 2nd round NLS Cup contest pits the Liverpool County Combination, who overcame the Manchester Football League in the previous round 3-0 (aet) to get here, against the Mid-Cheshire League, who got a bye into this round by virtue of winning the Cup last time out. 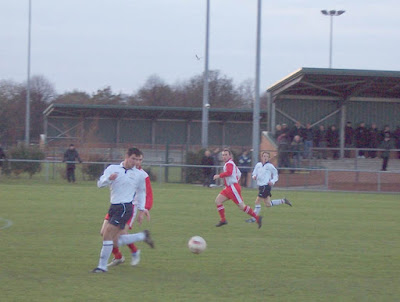 The Cheshire boys eventually turned out as the England National Amateur XI in the Central West Group of the UEFA Regions Cup Preliminary Round in Slovenia during September 2004, winning the group which included their hosts, Northern Ireland and Malta. This put them into the Intermediary Round Group 4 which took place 2 months later in Bosnia-Herzegovina and despite victories over Bosnia and San Marino, their defeat to the Republic of Ireland proved to be the end of their road, the Irish going on to the tournament finals in Poland this past June.

As a result of this experience, there has been a wider uptake for this year’s contest, with 30 entries from the Pyramid along with sides from Guernsey, Jersey and the Isle of Man, and no doubt the Mid Cheshire League side would be keen to repeat their European adventure.

It was noticeable from the squad lists that both sides were fairly reliant on players from just 4 of their leagues respective constituent teams. The County Combination calling up several from Bootle and South Liverpool but mainly Speke and Waterloo Dock. Similarly the Mid-Chesh fellas come only from Crosfields, Greenalls Padgate, Witton Albion Reserves and Monk Sports. You have to wonder whether this a result of the old pal’s act, or possibly the gaffers of Aigburth People’s Hall, Linotype & Cheadle Heath Nomads and the like throwing Wengeresque hissy-fits about releasing players for international qualifiers prior to the important Christmas period. 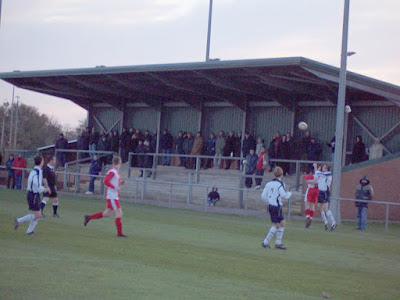 Either way, both sides play like they know each other reasonably well, but not perhaps well enough and the standard betrays the resolutely amateur ethic of the cup. As such a lot of belted aimless passes drift out for goal kicks and chances, a goal-line clearance from the LCC XI aside, are few and far between in the first half which does however spark into life towards the break as entanglement on the M-CL touchline rolls into a scuffle. The ref, who has a pretty good game by-the-by, is content to metaphorically clip them round the ear.

The Liverpool County FA’s ground makes up part of a sporting facility that will more regularly be used by co-tenants the Liverpool School’s FA. Mind you if there is a clash, an identical pitch runs alongside the one in use today, the position of terracing, dug-outs and fencing mono-zygotically twinned. Perhaps the next door pitch is being prepared for spin, although this one is certainly no high-scoring surface and it takes a spot-kick to separate the sides, with the ‘home’ XI making the most of a penalised push in the back. 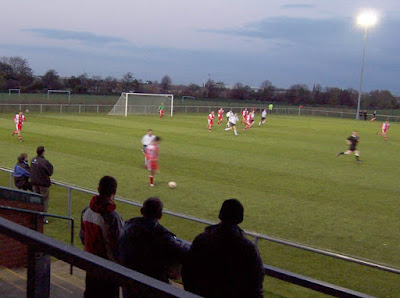 The Mid-Cheshire League will feel aggrieved that not only did they fail to make the most of their better attacking play but that the referee’s one glaring error was to come in not awarding a free-kick their way for a flicked back-pass in the 6-yard box. As a result, we will be looking for a new ‘England’ in the next UEFA Regions Cup. The record of Liverpudlian teams in Europe is reportedly quite reasonable, so maybe the reds will go all the way, beating the Anglian Combination on penalties in the final after trailing 3-0 at half time. Similar things have happened.

As a side issue, I should point out that I was pleased to be part of a crowd, many of whom were supporting a Liverpool side, which respected a minute’s silence for George Best this weekend. Although this minute’s applause idea may indeed be a better bet in more populous arenas in the future. Liverpool people are certainly passionate about their football though, as was confirmed for me as I walked home. I passed Fletch’s Sports Bar in Wavertree and noticed the faces of several weather-beaten ‘regular’-looking chaps gazing transfixed at the wall. Aha, watching the Portsmouth v Chelsea game no doubt, I thought, turning round to discover The X-Factor on the big screen.