My increased volume of appearances as the partisan rather than as hobo this year has largely been made possible by the existence of ‘fun fares’ on London-routed coaches. Get in early enough on the web-site and very nice prices can be found. I have been known, such as last week in fact, to get to and from the capital for 2 quid return. 80p less than it cost me to get the bus from my house to the coach station and back, an 8 mile round trip.

This time I had to shell out a mammoth £12 for the coaches, in addition to a tenner on the train. Never balked at paying that kind of money on away travel when I lived in Havant, and I’m not going to now. All it takes is the willingness to commit to a 5am start and an 18 hour day, 11 of which will be spent trying to squeeze a 6’4” frame into National Express seating. Not that I’m trying to earn points for martyrdom here, I ain’t after a medal. Besides Saturdays are fairly quiet on the coaches so I usually get to spread over 2 seats, and can catch up on kip quite easily. Also in the loyalty stakes, my departure north would certainly handicap me somewhat. 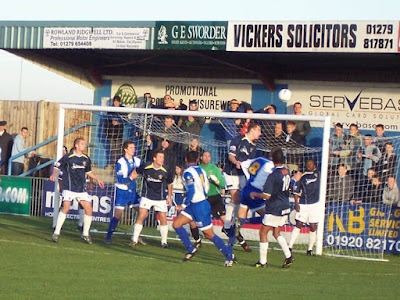 However the cliché is that following your team through thick and thin is always worth it, but as many will know, it sometimes doesn’t feel like it, whether that be through a bad result, a lifeless game or a negative, overly aggressive atmos on the terraces (although I don’t doubt that makes a day out for some).

The point is though for all those times, there are the others, the games when all the pieces fit. Today, I am very happy to say, was one of those games. I’ve not had as good a time at an H&W game in quite a while. The right result, a decent game and a great, positive atmosphere on the terraces behind the goal. Indeed, our behind–the-goal regulars have now taken to mimicking the players’ huddle prior to kick off, and the group hug dynamic seems to work just effectively on concrete steps as it does on centre-circle grass. WIN WIN freaking’ WIN, people! 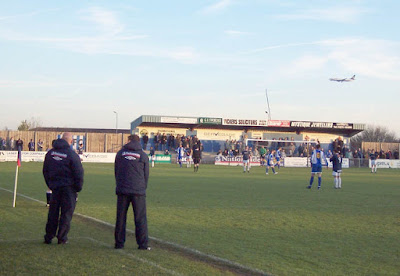 It is a simple correlation though as despite a couple of blips, we have not looked as settled and as confident a side since our FA Trophy semi-final run in 2002/3 and even then it papered over warning cracks in our league form that had dipped sharply from the season before. The last 2 or 3 seasons as a whole have been ridden with disappointment but the changes I understand Ian Baird has made in terms of incentive payments outweighing basic wage has put a little extra motivation into loading up the player’s post-match pockets. Perhaps their wallets’ weighing them down was the problem before.

As such the positive atmosphere spreads to the supporters and it was tremendous fun today particularly, and with plenty to get excited about on the field. We opened the scoring early, Brett Poate scoring a typically solid but graceful strike from the edge of the box inside the near post (as seen in the photo below, shame the ball crept beneath shot before the shutter snapped though). 10 minutes after Bishop’s Stortford were harshly reduced to 10 men but despite our sustained pressure, they managed an equalizer on 27 minutes as we got caught cold at the back in what was an otherwise pretty flawless display from our back four. 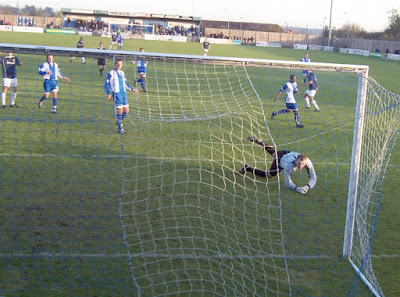 Despite going into half-time on level terms, we were never worried, our man Simon suggested prophetically that “this has got 3-1 written all over it”. It took a second controversial incident for us to regain the upper hand however as Rocky Baptiste’s side foot push towards an empty net vacated by a beaten keeper was interrupted by a prostrate defender’s arm. The question of whether or not it was deliberate is a difficult one to answer, but there is no doubt that his limb prevented a goal-scoring opportunity, nay, a goal. As such a penalty was the result and merely a booking for the man on the ground, with both sides arguing that if it was deliberate than it was a red-card, if it wasn’t then it shouldn’t have been a penalty. To my mind, the referee took the sensible course of action in not punishing Stortford twice, or punishing us by not allowing us a chance to finish our opportunity. Rocky put the spot-kick away easily past the keeper’s slightly premature dive.

Not long after Brett Poate pretty much ended any doubts with yet another trademark corker not dissimilar to his first. Ian Baird has recently remarked that if Brett believed in his ability, he wouldn’t be playing for us, or indeed in the Conference South. Today, the truth in that observation was abundantly clear. Long may he have self-esteem issues! We have often remarked in the last couple of seasons that we have never properly replaced our midfield legends Tim Hambley and Paul Wood, but with Poate and Robbie Pethick doing sterling work along the flanks just now, as well as Guy Lopez da Cruz looking strong in the centre, perhaps that observation will die away. Also the fact that we have not had to hang any hat of resigned ennui on the peg of Dean Holdsworth’s departure, indeed his name is rarely mentioned, tells its own story. Rocky Baptiste is a player that has been reborn with us. All of this suggests Ian Baird’s strict but fair motivational technique that is based on performance and commitment is certainly working wonders. 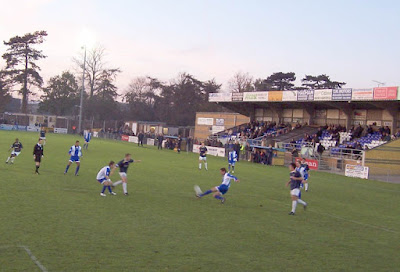 My mile and a half run to that station means I miss the injury-time minutes but no further goals, and I am followed by the strains of the Hawkmob breaking into Showaddywaddy’s ‘Under The Moon Of Love’. This is our party song, our victory-with-class standard, and to hear it again after, frankly, too long just rounded things off in sonic style, encapsulating how I feel today. Joyous, exhilarated and confident.

Despite January and February being famous for dramatic form troughs in the past we currently sit in 3rd place and look, I should whisper this, genuine play-off contenders. This thought puts the needed spring in my stride as I speed to the station, making the train with a minute to spare. The thing with the fun fares is they are only on selected coaches and the latest of the Liverpool bound options is the 18:30 which gives only about 90 minutes to get from near enough Stansted airport (seems after Yeading, I am favouring the flight-path away games) to Victoria coach station. What is life without risk though? Risk, a shortness of breath and a stitch? In keeping with the day, the Stansted Express and the tube don’t let me down.
Posted by skif at 5:31 pm

I don't know if you guys care, but I thought I'd spread the word that there are these cool two new DVD's at this joint called capitalent.com. They are DVD's on the Chelsea football club. One called Chelsea Centenary and the other 04-05 Season Review. It's only available on the site before Christmas...