A fair amount of twitchy bravado, in the form of condescension, no doubt cropped up in North Manchester prior to the first game in this Cup tie and since then the Oldham followers will no doubt have been keeping up the normality pretence in the face of increasingly noticeable soggy-logs collecting in their socks. It couldn’t REALLY happen could it? It took a goal from Methuselah, ‘David Ayres’ to his mates, to spare their blushes in the initial contest, but surely home advantage would sort out the men from the err.. other men, the Johnny 2-Jobs from somewhere near Walsall? So might be the pre-match thinking inside Latic heads.

So, as they sit for the first half hour of this replay without the expected goal-fest, they begin to get a little restless. Their chants of ‘who are ya?’ though are as much about genuine perplexity as they are clichéd terrace antagonism. There is certainly clear confusion as to their opponent’s status, with one bellowed guess “…you fucking pub team” clashing with the excitably vocal young lady next to me who cries incredulously “we can’t lose to a Conference side?” 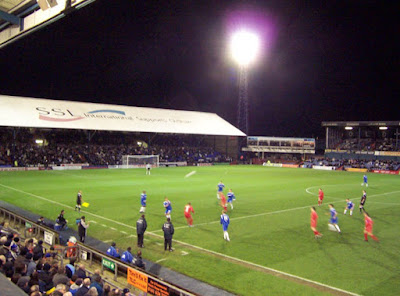 A League One side succumbing to a Conference beating may well bring a hint of shame, but these days it is a delicate hue, and to call it a shock would be stretching hyperbolic tabloidese somewhat. However being taken to a replay by a side 133 places beneath should, you would think, make snorts of derision about your opponents in the programme for said rerun, a little inadvisable particularly considering the Cup’s propensity for the upsetting of odds (and blinkered followers of Football League clubs).

However, a ‘fans-day-out-to-Chasetown’ style report in Oldham’s glossy brochure reads like a checklist for a Mark-Lawrenson-on-early-rounds-of-the-Cup-coverage drinking game.

Thankfully for the egg-primed face of the author, it’s probable pinning to the wall of the Chasetown dressing room can only keep Oldham at bay for so long, but in 2 of the 4 cases it takes real belting long-range strikes to get the beating of the Scholars and it is only their expected and understandable tiring that allows Oldham to make it anything close to easy. 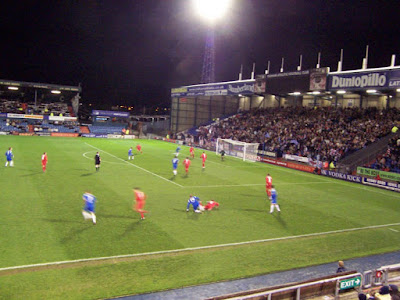 Considering the lack of full-time training, and the fact that it was the 9th game of their protracted cup run (which has played havoc with their league fixture backlog), you can certainly forgive them for looking dead on their feet comes the 65th minute. They never give up though and cannot fail to have been inspired by the 2,436 strong away support (taking a fairly impressive 1900% of their average home league gate). Sadly an Oldham chant of ‘Is that all you take away?’ isn’t forthcoming. However the heavy away throng does remark of the subdued Oldham turnout “you’re supposed to be at home”, many of those joining possibly less than a 100% sure where exactly where ‘their’ home actually is. Not that the Chasetown regulars should be worried about that. It is the nature of the non-league follower to continually bleat about the lack of support in the locality, but to get sniffy about it, mentioning bandwagons and such, when a load do turn up en masse.

Who knows what the hardcore thought about the loud take up of the “Chasetown ‘til I die” chant, but it certainly has the same double-edged timbre as Kevin Pietersen locking lips with the lions on his helmet badge. Hopefully though this cup run will inspire more regular support even if only from another 50 or so, as with the money earned from this adventure mean Chasetown are a club who can afford to think on with ambition.

Another noticeable comment from the Oldham throng is “you’re just a town full of doggers”. Now I’ve always liked that term to describe the dogged, tough-tackling players before it was high-jacked by the voyeuristic exhibitionists of this world. That said in its original form, it wouldn’t apply in this case as Chasetown have certainly not been a bunch of heavies hacking their way to underdog glory.

It’s fair to say then it probably the more contemporary meaning is implied, as I hear Stan Collymore lives in the Walsall area. It seems a little unlikely though that a big away cup replay is the only thing that can bring the Chasetown population together outside of regular socials in a dimly-lit car-park.

Firstly, Chasetown Football Club are not a Conference Side. They have recently been promoted from a Midland Alliance League, meaning still that they are not a 'proper' conference sides. If Oldham were so arrogant about playing a non-league side, personally in my own opinion, they should have a long look in the mirror for conceding a replay even if it was on a pitch not quite as superior to football league stadiums! Living near Chasetown, the club has benefited alot from this amazing cup run. If anything, Oldham are the team coming out on the worse side, as the embarrassment from having to play another 90 minutes should of dented a major segment of the Oldham Athletic Side....
Good Bye

Just to make it clear that I am aware of Chasetown's position in the pyramid, the point is that the young lady sat next to me was not. I imagine she wasn't alone.

I'm an oldham fan and i was at the match and heard none of the "chants" you are on about from the oldham fans.
And i think you'll find that i and most oldham fans do give respect to lower league clubs and thier loyal fans.
And as for the lack of home attendance, well we're a league 1 club in an area surrounded by the likes of Manchester United, Man City, Bolton, Blackburn. i think you can forgive us for not having a huge following (plus it was a night match so there is always a smaller attendance).
This "report", if you could call it that, has vastly lowered my impression of lower league fans.

And finally if you are going to mention a latics legend such as David Eyres then at least spell his name right.

I'm not a Chasetown fan, just so you know. VERY impartial in fact. I have nothing to gain fromlying about what I heard from both sets of fans.

I make no comment about the size of the Oldham crowd, certainly not in a pejorative sense.

I respectfully suggest that you have not read it closely. The only thing that comes close to a criticism, is when I talk of the slightly patronising treatment of Chasetown in the programme.

However I humbly apologise to you and David Eyres for my misapplication of an 'A' to his action. Thanks for pointing it out.