So why are WE here? I philosophise not on the ascent of man to the cogent and vertebral, but on why 268 souls should be at the home of Spartan League Brimsdown Rovers, when the Rovers themselves, are not.

That can be traced to either June 2001 or September 1999, depending on who you ask. The Town followers would no doubt tell you that it was the former, when Enfield FC (twice winners of both the FA Trophy and the Alliance/Conference in the 80s, most significantly in 1985/86, the year before automatic promotion to the Football League) rendered themselves nomadic upon the sale of their Southbury Road ground and took up a groundshare deal with Hertfordshire-based Boreham Wood, from where they have since moved to Wodson Park. From despair to Ware (FC). 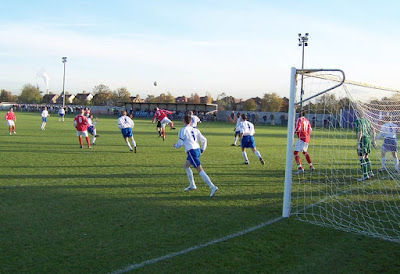 I’ve no doubt that those in charge of the original Enfield, with a degree of hurt and abandonment still echoing in their voices, would tell you that the Enfield Suppporters’ Trust breaking away to form their own club 2 years after was the key. It is clear though that the main body of support were behind the split, as Town’s crowds are more than double that of its asexually reproductive mother club.

An easy comparison can be made now as this year, for the first time, the clubs meet in the same league competition, the Southern League Division One East. The two clubs have met competitively in the FA Vase however, with Enfield FC taking the upper hand, preening like Darth Vader over a stricken Luke, revelling in their upsetting, but undeniable, parentage.

However in the whole scheme of the clubs’ histories, it is clear that while one has severely weakened, the other moves from strength to strength, Town winning the Essex Senior League twice in the process of doing up the Brimsdown ground to Southern League standard. Now there in the same season as Enfield have hauled themselves back up from the nadir of Isthmian League Division 2, the early running has been made by the young club, lying 3rd while Enfield lag in 14th place. 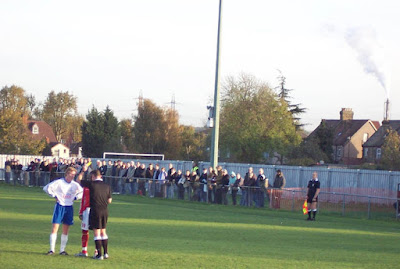 Today’s Trophy tie represents another test of how far Town have come as Redbridge come from the Isthmian Premier and therefore one step higher. Known as Ford United until the start of last season, owing to a long association with the car manufacturer and playing at their Sports & Social Club ground, Redbridge changed their name so as to encourage more support in their locality. This despite actually playing in Ilford, moving to the Oakside Stadium in 2000 with previous leasees, now tenants, Barkingside FC.

Needless to say it hasn’t worked thus far, as they averaged not much more than a hundred punters a game last year having scraped into the first season of the Conference South, albeit mostly anchored to the bottom of it, utilising over 70 players during the course of a poor campaign. Not that they made it easy on themselves, one of their 11 wins achieved with an illegible player and thus ultimately for no points. If I tell you I was at the game in question that might give you some clue as to whom that pointless win was achieved against. And no, the points ripped from their grasp were not shoved upon our own, at that stage, meagre tally. More’s the pity. 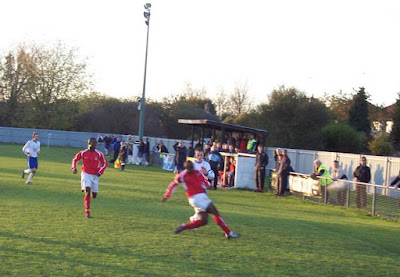 Redbridge have this season endeavoured to follow up last season’s ghost-train with something genuinely frightening, as this even more gory sequel currently again finds them in the messy, unkempt bowels of their division, with 3 points from 14 games and precisely zero wins.

In those circumstances you might forgive a complete absence of an away following today but they are here, about 10 of them (which I guess being roughly 10% of their home gate could well be above the Ryman travellin' average), in good spirits, one chap tossing a coin in lieu of a result prediction. “Heads we win, tails we lose then”, he states. “...Tails...mmm...I’ll toss it again”. They come armed with a gaggle of excitable urchins who utilise the hollowness of the prefab terrace to pound out a ramshackle percussive undercurrent to the one kid’s shrill “Red-bridge” mantra in an interpretive dance style, before one older follower shows them the more tried and tested technique of using the side of a fist to create a more homogeneous sound on the thin metal of the back wall. The children have no interest in uniformity, to their credit, and save their freak-jazz for another occasion, while the adults unfurl, for some reason, a Scottish flag with ‘Redbridge FC’ scribbled in frenzied biro along one half of its otherwise pristine saltire.


They have plenty to keep them in reasonable cheer as the first half belongs to their side, if not emphatically so. Both teams struggle with the oiliness of the surface, an Enfield defender forced at one point into a defensive header despite his hands, knees and the ball all sliding backwards along the deck. On 32 minutes comes Redbridge’s first real chance, a long dipping shot scooped over by the keeper. However when the corner is swung over, the Town defence stays rigid allowing Dave Whattley to make an excellent run to meet the ball with his head and divert it across keeper Andy Hall and in.

While their keeper has to make an athletic stretch to keep out a spooning ball near half-time, the remainder of the half is largely played out to a series of injuries, three sets of handbag drawing incidents and the sound of a neon-clad steward battering a neighbouring fence in a seemingly futile attempt to alert the homeowner to a stray match-ball amongst the dead, fallen leaves that have gathered beneath their skeletal tree. 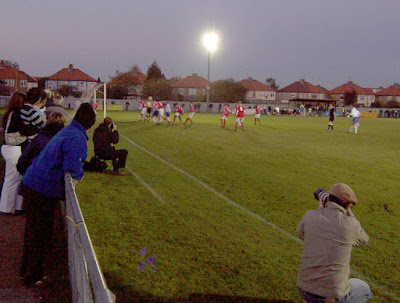 If Redbridge have shaded the first half, the momentum is clearly with the home side in the second, with wave after wave of attack. Twice the ball is put into the net from open play, but neither is allowed to stand due to infringements upon keeper and defender. Between these incidents though they do get some reward for their valiant efforts as a penalty is awarded and then deposited by Rudi Hall just hard enough so as to bend back the fingers of the unfortunate Redbridge goalkeeper Dean O’Neal.

This is the way it remains until the final whistle, delayed 10 minutes by the first half rough-house shenanigans. While the game slides toward a draw, a steward’s attention is drawn to a mate and his infant-school aged daughter. She is told by the steward “You don’t get your good looks from your father”. “He’s my best friend”, she protests. “He’s my fah-ther” she continues, comically with finishing school deportment. “He’s my great Lord” she concludes, overstretching the point somewhat. Fahther is laughing, baffled and slightly embarrassed by such emphasis on the Daddy-daughter bond, while the steward chortles “When you’re 13, come back here and tell me the same thing!!”. Without a suitable insult to hand, nipper results to Dadaism, “when you’re 62, my Dad will be born”. Dad pauses, eyebrow raised, and says “you’re weird!”. I’d call it a work of come-back genius myself.