The squat nature of Raydale Park, with its pre-war bus shelter of a terrace along one side, the corrugated iron roofing and the dour wooden façade of the clubhouse betray its recent non-league history. However, the shell of a temporary, open stand being rebuilt as permanent (and covered) at the far end hints at their undoubted ambition. Indeed, there is even talk of a new 6,000 seat SPL-compliant stadium being on the agenda.

You might make comparisons to Wigan Athletic: former non-league club suddenly getting an unshackled hose of ready cash pouring in and rocketing through their leagues. Although the growth appears more at Wimbledon pace and one notable difference is that Wigan’s non-league days didn’t occur in a different country. Indeed not many clubs, let alone Scottish ones, can claim their record attendance as coming against Rochdale. The magic of the cup again then although today’s tie is under the jurisdiction of a different FA.

This is only the 4th season since Gretna ceased to provide an east/west borderland balance to Berwick Rangers’ participation in the Scottish leagues as prior to that the Black & White’s played their football within the English pyramid. After an initial season in the Dumfries Junior League subsequent to their formation in 1946, they switched to the Carlisle and District set-up, knocking about in Cumbria until they were accepted as part of a first intake into a new Northern League second tier in 1982 where they remained before getting elected into the Scottish leagues at their third application, after the demise of Airdrieonians, and new club Airdrie United’s takeover of stricken Clydebank, left a spare spot in Division 3. 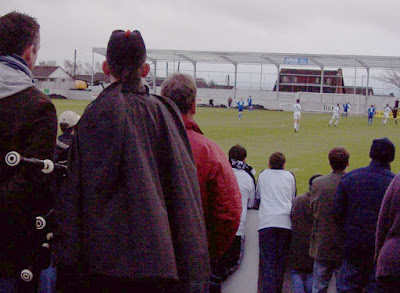 After a couple of decent seasons of consolidation, Gretna ran away with the bottom division last year finishing 20 points ahead of second placed Peterhead, 47 in front of Cowdenbeath in 3rd with a fairly reasonable goal difference of +101. For this they can thank their excellent squad of players, many of whom could easily be playing at a higher level. The fact that they are not is due to the input of Gretna’s managing director Brooks Mileson, 100-a-day smoker and no. 49 in FourFourTwo’s recently published “guess the weight of the wallet” supplement, whose JP Getty-style philanthropy is centred on shooting this small town club through the Scottish leagues.

He is a man for the big gesture, forking out for pre-season training beanos in Italy, subsidising free-entry to their biggest Scottish Cup home-tie to date against Dundee United and, as mentioned, offering attractive full-time pro packages, in the semi-pro end of the Scottish leagues, to players who were coveted in much higher places.

Former Bolton man, and brother of Hobo Tread favourite Dean, David Holdsworth is here, with a detail of ‘Diet & Fitness’ as well as overseeing the reserve side. He also seems to be on hand to provide plenty of programme notes and moody portraits to go with them. His piece on the stiffs recent turn out against Arbroath is curved around a shot of ‘Reg’ (as he signs himself) wearing a leather jacket, shirt unbuttoned to reveal a cheeky hint of chest and seemingly about to film a promo for an unadventurous cover-version of “I Want To Know What Love Is”. Elsewhere he continues his A-Z of football series with Kenny Dalglish at ‘K’. Of most interest here though is another quality headshot of ‘Reg’, deadpan cool above a black polo-neck, which attempts to say “Because the lady loves…”, but actually suggests that he has sat down too quickly on his bike saddle.

Back to the game though and thanks to a late-runner from Carlisle, I miss once again the first 10 minutes of a match and the first goal. However, once in post on the terrace, stood between one of the half-time bag-pipers and a rave-alien stilt-walker (a Mileson gambit, for sure), I soon catch up with a Gretna second, a tidy finish from the hot-shot hooves of Dr. Kenny Deucher, part of the Gretna adventure while on a career-break from medical practice. It is a break which may see an indefinite extension considering his 41 goals in last year’s campaign and the 15 so far this time round.

Gretna’s professionalism is plain to see, even for the shoddy late-comer, and Cove rarely get out of their own half in any meaningful way. That is until the 32nd minute when they finally break, Gary Clark slotting his shot around the keeper from just outside the box. The Cove dug-out leap up with an almost choreographed level of synchronization, begging a Mexican Wave which doesn’t develop, the travelling Highland fans leaping about more excitedly and haphazardly underneath the bus-shelter opposite, singing “we’re going to win 3-2”. Not long after though they begin to get more realistic, getting into “we’re only here for the money”.

The linesman in front of the away section in the first half doesn’t escape their notice either as they sing at him “Linesman, linesman, shaves his legs”. Mind you it could well have been “shave YOUR legs”, but I wasn’t able to fully decipher the accent, nor was I close enough to examine the quantity of fluff, or lack thereof, on them demi-officious pins. 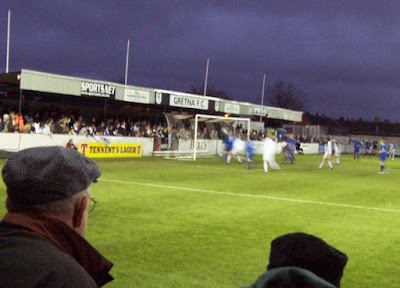 As you might imagine, the Cove supporters (around 40 strong), are in reasonable humour all afternoon, goading the lack of vocal support from what is a low crowd by Gretna’s new standards. Their average is well over a 1000 for their league campaign, but the ‘Down Memory Lane’ filler-page in the match-day mag reveals a great deal. 1 year ago today it was a 3-0 win over Elgin in front of a developing crowd of 661. 10 years ago they were hosting Worksop in front of 82, although those hardy souls did witness a 6-0 Gretna win. And they call this progress?

Not that the Gretna of ‘95 vintage are entirely unrelated to the current side, as two of the 6 goals that night came from Derek Townsley (back in border-country via Queen of the South, Motherwell, Hibs and Oxford), who adds the 3rd today just prior to half-time, moments after Deucher MD has another strike disallowed. Townsley’s back-post header allows the club DJ’s itchy fingers to slam a fader up, and as such “Hey Baby” comes farting out of the PA.

In the first period, Gretna look to be resting on their laurels and coasting into the 3rd round, until a fairly soft penalty is awarded in their favour in 63rd minute, which Ryan McGuffie curves upward and in. 10 minutes later though Cove remind us that this is a contest, forcing Alan Main to stretch out an arm whilst grounded to impede the ball’s keen goalward progress. 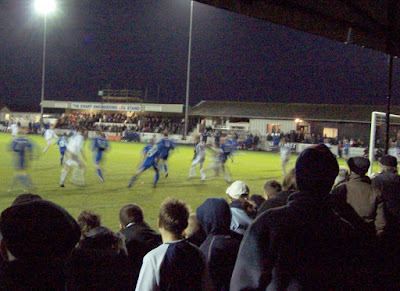 However, within a minute of that brief death-rattle, Paul Brady completes his brace (his first being the ‘missing’ opening goal) in glorious fashion, hop-scotching his feet as though escaping darts thrown with the sneered demand of “dance”, through the tired legs of the Cove defence. Despite Ivor Pirie’s initial save, he skips some more, collecting the ball after those sleepy limbs fail to connect with the rebound, sending it handsomely into the roof of the goal. The DJ has clearly been expecting this as the chorus of XTC's “Senses Working Overtime” kicks in, Andy Partridge providing the lazier arithmetists with a quick recap.

You can understand the DJ being well prepared as you have to go back to October 15th for the last time Gretna failed to score less than 3 in a game. For the 6th and final effort, we get “Nothing’s Gonna Stop Us Now”, and such is the quality of the strike, you can let them off a little pomposity in their euphoria. Left back Davey Nicholls (with whom I share a great deal) squeezes an exquisite 25-yarder in the miniscule gap between keeper and post.

It is an emphatic win, one befitting their relative positions in Scottish football, but you get the impression Gretna were nevertheless saving themselves for bigger challenges ahead. An initial one will be an away trip to Division One side St Johnstone in the next round. Not exactly a Goliath figure but a ‘giant’ they will be confident of slaying.