Word is that Wembley may not be ready for this season’s cup finals. Mind you, it’s been “We won’t”/“You f***ing will” style duologue between the contractor’s and the FA for a good while now. Slow day at the sports desk? Send the work experience tea-boy knocking on the door of the larger of the dusty terrapins temporarily beneath North London’s new semi-circular icon.

It is with fingers crossed then that I say that today’s game sees me step back onto a familiar path, if you will, on the road to Wemberley. After Kidsgrove beat Ashton, they lost to Gateshead who then got thrown out for player a ringer. Kiddy then re-entered to take a pasting off a Warrington side fed up with constantly needing replays.

As such I am in Cheshire today in the town which feels like it’s desperate for the attention of its two irreconcilable parent-figures. Liverpool and Manchester positioned on either side, perpetually pulling Warrington in a social and cultural tug-o-war. 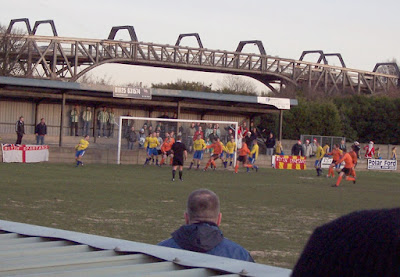 The former Stockton Heath Albion are housed just along from the Greenhalls' Distillery, currently encased in plastic sheeting having recently suffered a fire that caused Stockton Heath village to smell temporarily of burnt gin. Cantilever Park itself lies under the gaze of an imposing bridge, its design inspiring the ground’s name.

It is a place of industry and, being along the M62, of rugby league. The Warrington Wolves have their sparkling new Halliwell Jones stadium in the town centre and attract support numbers the football club probably drools over. Indeed, today’s attendance figure is buoyed by a significant percentage, perhaps even half, of North-Easterners on a festive beano.

Despite such apathy, Warrington Town have known the thrill of a Wembley final having reached the Vase final in 1987. Today’s opponents, Blyth Spartans, have a fine history in the knockouts themselves, having reached the FA Cup 1st round 31 times and once, famously, to the 5th round. Being a division higher than their hosts though means that they cannot revel in the status of the underdog this time. 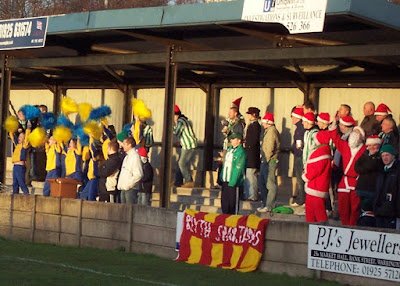 To make up for that thought, they have their traveling support, an impressive number particularly for a Northern league side at a relative extremity. Several wear Santa hats, 3 or 4 have gone the whole hog and one dons a seasonally adjusted sombrero. One chap adopts a more lo-fi approach, replacing his scarf with a thinning strand of uniform green tinsel. Sadly the on-field Spartans are today clad in their lurid orange away strip, a fashion faux-pas when painted onto the dangled-frog physiques of non-example-setting skipper Richard Forster and assistant boss Graham Fenton, but particularly so when in collision with the white-fur-lined clobber of the fancy-dressed terrace crew.

Their sartorial mis-match is mirrored in terms of performance with the Blyth fans’ large repertoire of songs, including “I wanna be round the toaster, when the beans come out the tin”, jarring with a largely lacklustre first-half display from their satsumaline heroes. Certainly NOT just like watching the Dutch. They are not alone in colour, though, as amongst the many St. George and Union flags for both sides is a Swedish flag adorned with the name of the hosts, presumably for the colour coincidence rather than a zealous pocket of Warrington support in Scandinavia. Mind you, there is a Billericay Town fan club in Norway, so who knows?

Aside from that display of cloth, the home fans don’t appear too excitable and with the expectation of precious little unchoreographed support, Warrington employ a troupe of yellow and blue clad cheerleaders to take up post at the start of each half at the covered end, beneath the bridge. This creates an early standoff, as this is the end towards which Blyth attack in the first half. The Blyth fans mass just to the side of the auspiciously decorated young uns, even joining in with some of the girls’ elementary dance moves. Impressively for a bunch of schoolgirls in their early teens, they stand their ground, always taking up the challenge of a “You’re supposed to sing at home” with a coordinated star-jump square dance and a prickly flick of a pompom. “Gooooo Yeelllooows” might not be a haka, but certainly highlights a lack of intimidation on their part. 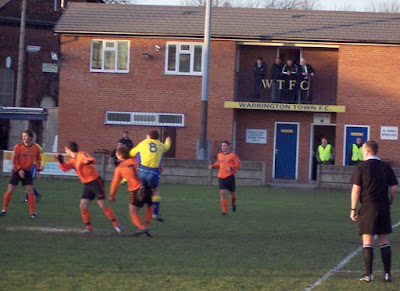 As an aside to all this, a football match breaks out, with Warrington taking the lead midway through the first period, a clearance from a free-kick is hit, as seen in the above photo, straight back by Dave Tickle. The ripple of excitement causing a strain on the overhang of the director’s balcony. They might well have a case for a potential second after 38 minutes as Mike Heverin enters the box only to have his legs taken from beneath him, without the reward of the penalty kick.

Another controversial decision awards Blyth a corner in first-half stoppage time, from which a shot hits a Warrington arm and this time the ref points at the white punishment pimple. A number of hitherto bored and impatiently beer-hungry Blyth fans, including an errant Father Christmas, spill haphazardly out of the bar together to witness Richard “Blyth. Not lithe” Forster send keeper Colin Flood the wrong way. It is an equaliser that doesn’t reflect the balance of play.

To celebrate a moral victory, the cheerleaders amass in the centre-circle. Their display though appears a touch minimalist, the troop standing stock-still for an eternity before a voice bellowing “CD ain’t workin’” from an open window in the boardroom spoils the John Cage-like ambience which made for a nice accompaniment to the modest sea vessel gliding gently along the adjacent Manchester Ship Canal. 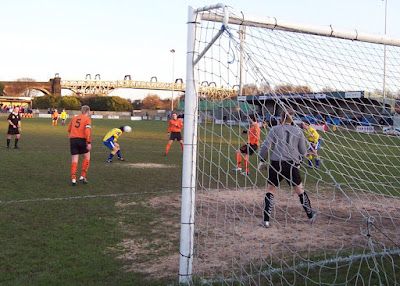 It is a different Blyth that start the second half, making themselves worthy of their equaliser, and more, as after 50 minutes they have the ball in the net from an exquisite lob, only for an earlier offside to rule it out. They soon make up for any disappointment, only a further minute passes prior to Blyth establishing a lead, that eventually wins it for them. A cross is headed weakly against his own bar by a Warrington defender, before swiftly being followed up by Andrew Leeson.

Warrington may point to the 2 conflicting penalty decisions as being decisive in this game, as they manage 13 chances in the game to Blyth’s 4. However, for all Heverin’s eye-catching work up front, that half of those occur in the last 25 minutes with each sliding achingly around the Blyth goal’s force-field is equally their undoing.

Blyth now face Welling United of the Conference South at Croft Park in the next round. A 600 mile round trip for the Wings, now we are into unregionalised draw, should be a decent leveler, but Blyth will still have to up their game from this showing. Mind you, if there is one team you’d back to beat a side from a higher level…

Town were unlucky to lose the game and we'll be back next year.

They were certainly unfortunate and looked a very good side. Would have no problem about watching them again.

Best of luck for next year.