Kidsgrove sits at the point where the Nottingham–Crewe and Stoke–Manchester lines split apart. A light breeze is the only welcome upon dismount at the joint, having descended the north-western leg of Kidsgrove’s welcoming Y. Despite the sluttish nature of its spread-eagled, wanton interchange, the eerie calm of the Saturday afternoon suggests that Kidsgrove is happy to never be where the action is.

Round the corner from the station, there is a modest row of shops packing in the essentials, the ophthalmic optician, dentist and optometrist stacked side-by-side as well as a couple of banks, alongside the typically village smattering of the old-fashioned and the slightly frivolous: Bryan’s, a place of flannelettes, tights and light haberdashery displays it’s range of caps (5), from baseball to flat, on the door frame; a deserted amusement arcade provides home to 20 fruities and a blackout-curtain of smoke-heavy dank; while a wedding decorators and a birthday wrap specialist sit together, holding hands in a show of twee but warming contentment. 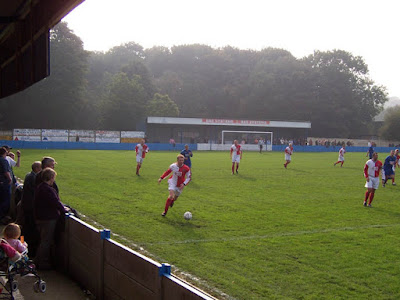 Round one corner, the Post Office, Library and Job Centre ally themselves as beacons of public service, while round another lurks Tesco, counting out its money and laughing. Around one further corner an increasingly Riddler-hued Kwik Save looks on enviously. In addition, for a town that sparks with precious little excitement, they nonetheless value their hair as a disproportionate percentage of barbers and stylists are scattered about.

The two competing family butchers display fixture posters for the town’s football team, where no-one else seems bothered, the meaty union getting their collective muscle (and gristle) behind the ‘Grove Trophy run. Therein lies a familiar problem, garnering local interest. While Clough Hall Park next door bodes well in name (particularly as it is also the ‘real’ name of the football ground), the fact that the pub of the same name proudly displays a ‘good luck’ letter from Port Vale gaffer Brian Horton suggests the full-professionalism of the League One doggers captures more attentions than Kidsgrove’s exploits in the Unibond Division One. 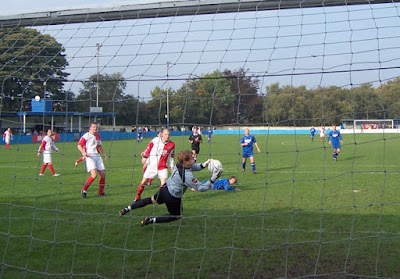 However those involved with the club would be hoping that an FA Trophy tie against a side from a level above (was two before Ashton United’s relegation from Conference North last April) would bring in a little more than the average. As it is the crowd isn’t much over the norm, with Ashton contributing about 15% of it along with a big red flag and, rather quaintly, a rattle, which whisks up some brief clacks of terrace skiffle before the musician’s wrist wears out, or possibly because the novelty has worn off.

It’s departure from the sounds of the ground is accelerated when the home side take the lead on 15 minutes, a cross planted home resolutely on the volley. Despite their manager moderating a touchline shout of “run at oom, their defender’s slow as shit” to a whisper, as said centre-half lollops to within possible earshot, Kidsgrove’s confidence in their causing of an upset is very clear. However, it only takes 5 minutes for Ashton to equalise, and their management are also keen not to rest on their laurels, the bench helpfully informing their own slothic no. 5 “we started 20 minutes ago, y’know”. 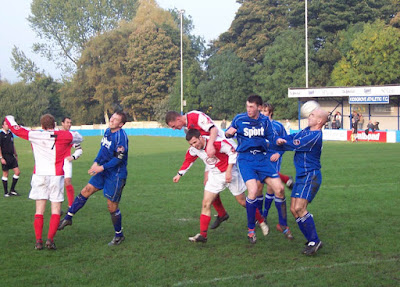 Almost immediately they are awarded a penalty which is struck straight down the middle foxing the keeper’s dive but not his toes which spoon the ball back out of the box. It is the first of many disappointments in front of goal for Ashton as they dominate the remainder of the first half, without exploiting fully the widening holes in the Kidsgrove defence. They hit the post twice and despite rounding the keeper in the 41st minute, Ciaran Kilheeney only succeeds in placing the ball into the right cheek of a covering defender’s timely arse.

Noticing their own lack of exploration into their opponent’s half during the first period, Kidsgrove clearly get fired up at half-time as they take the second half by the scruff of the neck, taking the lead again after 49 minutes, Ashley Miller dancing around the edge of the area and hooking a shot which proceeds to weave through a defender’s legs, over the plethora of hillocky divots that have formed on the already lumpy surface and past a motionless keeper. Not long after, a dream ball from defence lands behind the Ashton backline and just in front of the impressive Darren Twigg's run, but his shot is blocked by keeper Ashley Connor’s feet.

Throughout the second half, 2 Kidsgrove old boys (the two lads in the photo below) stand like Statler and Waldorf just to the side of the Ashton dugout that becomes increasingly misted with ear-steam condensation. Any stumble from the Ashton players now coming forward in search of another equaliser is met with cries of “WATCH THE DIVER! WATCH THE DIVER!” over and over and over in a thick, fog-horned Staffordshire accent, even when a player is clearly scythed down. 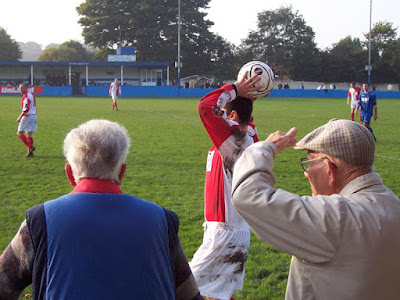 After about 15 minutes solid (and I mean SOLID) of this and another slight trip, the younger of the two starts singing ‘a dive, A DIVE, a dIVe, a DivE’ in an improvisational and mostly atonal style more appropriate to the antagonising of dogs. Visibly bristling for some time, a vein pops on the Ashton coach’s temple as he can finally take no more of the incessant nasal whine, shouting “Will you fuck off, you’re just a boring old fart”. Our old boy responds, seemingly unaware of the agitative nature of his yelling, “Why is ‘e diving then, why doesn’t ‘e do something for ees teem?”. An Ashton youth team hanger-on is on hand to retort by proxy with a query, “why don’t you shut up and do something for the fans?”. Although quietened by this, Foghorn nonetheless continues pumping out unrequited instruction before his mate ambles off without farewell, and he himself eventually grows weary. Even the Kidsgrove fans breathe a sigh of relief at this stage, which turns into a delirious cheer as they are awarded a penalty in the 81st minute, and dispatch it via the underside of the crossbar.

This just about sums up Ashton’s luck as they press hard for the remainder of the game, twice more hitting the woodwork but the mountain is too high to climb and as the flag is folded up behind the goal, the final whistle puts Kidsgrove into the Second Qualifying Round where they will play against one of two succedents to former league clubs, Gateshead or Bradford (Park Avenue), who replay tonight (19th October).

UPDATE 20sep05: Gateshead won that replay 4-3 after extra time, just so as you know.

Glad to see you appreciated Non League To You.

Best description of Kidsgrove I've ever read. The football grounds of North Staffs are full of those old boys. Once upon a time, so was Feethams, RIP... *sob*