After the fast, a relative feast. 3 goals. ‘My’ first win in 6 games. The first away win on my watch since Grantham in April 2004, so therefore my first in the post-Southern League era. Some statistic when you consider that I’m forced to feed mainly on the away game scraps these days. In short, people, the jinx is broken. Me me me, eh?

The H&W throng was an impressive size today augmented by a couple of stray Sutton United fans, one of whom helpfully informed us that, in terms of political boundaries, Carshalton was indeed “just a small town in Sutton”, a lyric they tried to shoehorn into the H&’Dub hymn-sheet during the course of the afternoon.

Not that there was time as some of the Havant & ‘Ville brethren had some new material of their own. Firstly making use of Rocky Baptiste’s real first name to claim, factually in many respects, “we’ve got Jairzinho”. Furthermore his new strike partner has come to us with an Arsene-style name not a million miles away from the club’s, allowing a handsome segue within an existing tune, “Haaaavaaaant and the Vil Pow-ell” going west early on. Also, bearing in mind Carshalton’s nickname, “the Robins’ have got bird flu la-la laah-la” was chirped. Sounded good coming from the Hawks as our programme editor Simon pointed out. 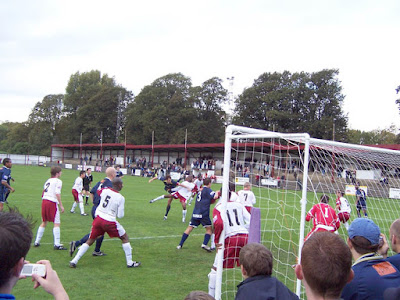 On that note I also learnt today that we have moved into the world of the mascot. Using our connection with ex-Hampshire wicketkeeper Adi Aymes (now our fitness trainer), it seems we’ve purloined the county club’s ‘Harry the Hawk’ costume for the winter, and it appears our terrace regular ‘Sweary’ Les will hibernate within it at home and, when possible, away. I imagine he’ll eschew his nickname, for as long as he’s handing out sweeties anyway. One also hopes that ‘Harry’ survives any EU-directed precautionary cull.

A lot of vocal fun was also had at the expense of ex-Wimbledon midfielder, and London cabbie, Peter Fear who was with H&W at the end of last season before just not showing up at the start of this campaign. Eventually contracts were annulled and he turned up at Carshalton but a gentleman’s agreement between the clubs meant he was able to spend all afternoon in the clubhouse allowing several pints of iffy lager to eat away at his Knowledge. 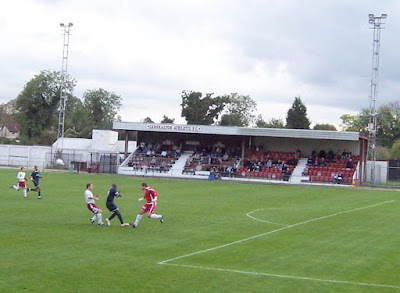 The on-field Hawks were far from on top form today but considering Carshalton’s seemingly doomed spot at the base of the Conference South, they were good enough to get the 3 points. Luke Byles showed the value of chasing down as their keeper Stuart Searle’s pressured clearance hit our man at just the right angle to bounce back past him into the net. While the sides shared the spoils for the largely lifeless remainder of the first half, it did feel as though it was only a matter of time before the Hawks would add to their tally.

However a Carshalton equaliser was to come first not long after the restart, Marlon Patterson lobbing our keeper Colin Matthews from the edge of the area. No mean feat when you consider that Colin is 6’8”. Aside from that positional faux pas though our gargantuan gloveman had a pretty good game. It certainly shows the impact, after Gareth Howells’ woeful kicking against Cirencester, of having genuine competition for the No. 1 jersey. Weird that this should come, finally, in the year after we disband the reserve team, but I guess that means if the keepers’ want regular football there is precious little room for error.

While Carshalton’s attacking play was not as restricted as one might have liked, it was H&W creating more down the flanks with Rocky holding the ball up brilliantly, and Vil Powell (brought in from Stafford Rangers after the Cirencester debacle) causing major problems. Both were rewarded with a goal, Vil capitalising on some Keystone Cops defending to loop one in over the keeper while Rocky was able to side foot in the clincher from close range after Luke Byles’ excellent penetrating run and cross. “Fearo, Fearo, what’s the score?” rang out from the far corner of the long covered terracing. 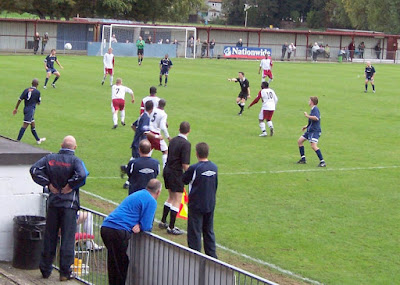 Perhaps this was Luke’s way of responding to manager Ian Baird barking ‘f**king lazy knob’ at him moments earlier. Certainly, Bairdy didn’t allow his touchline ban to concern him unduly. To illustrate, our gaffer is the bald chap in the photo above with his hands on his kidneys, standing about a foot away from where he would have been ordinarily.

There we go then, mostly workmanlike but hopefully will do wonders for our confidence away from home. What a difference a week makes. After the doom and gloom of the cup exit whilst 11th in the table, 3 wins occur and we find ourselves propelled 6 places, with 3 points and a couple more goals separating us from 6th placed Bognor. Roll on Cambridge City at home next week then. I’ll be there, hopefully today will be the start of a new kind of jinx.
Posted by skif at 5:21 pm

At last - a win! Any thoughts of there being an observer's paradox when it came to you and H&W can be put to rest.

Nice to see Ian Baird's touchline ban didn't impede his ability to communicate with the players...