Two points of qualification to begin with, particularly with regard to matters raised in my posting from Skelmersdale.

Firstly: the love of the FA Cup and it's attendant 'magic' IS conditional.

Secondly: new build grounds with no cover aside from the seats are all very well when baked in sunshine, but standing in 90 minutes of pissing f***ing rain (which begins with the ref's first whistle) as your team gets scalped in a potentially financially rewarding cup contest, well, there's only so rose-tinted you can be about that.

You might ask why, if the stands were covered, why not sit in them, to protect oneself from the shower? Some of the H&W crew indeed took post beneath the far-side roof, hanging our flags out front. Any notion of 'taking the stand' though was combated by the gaggle of small boys experimenting with vocal support sitting unintimidated in the centre. Clearly someone had brought along 'My First Football Chant', and after 3 or 4 minutes in close earshot of their runty little squeals, myself and my party took our chances under the sky's precipitative salvo. 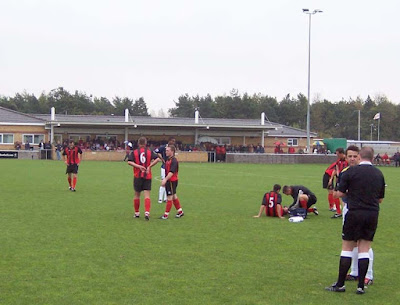 You'll notice that defeat in the FA Cup prior to the rounds proper, particularly to a team from a league below, brings out the bitter curmudgeon in me. Yeah, that's right, wanna make something of it? Grrr....

The prize money continues to rise in the FA Cup and a win today would have deposited 5 grand in our bin. May only account for a couple of weeks wages for us but it adds up. A team starting in the Extra Preliminary Round that makes it to the first round proper not only gets the possibility of a lucrative tie with a league club, but will already have banked £22,500 which would be an absolute fortune for a club at that level. At this current time this dream remains alive for Wroxham, Cammell Laird, Bishop's Cleeve, Chasetown, AFC Totton, Cogenhoe United and Leamington, although only the latter went into Monday's hat without an 'or' as pre- or suffix.

So for this year H&W will have to make do with £3,750. Perhaps not to be sniffed at but while the clubs think more these days about the moolie, us fans continue to pray for the big day out in the 1st round at a league club. Twice we have reached this stage of the competition and twice we have drawn out Conference National clubs as oppo. We may have run Southport and Dagenham & Redbridge close in those ties, as well as (then non-league) Barnet in the 4th Qualifying Round the year in between, but the big prize still eludes us. 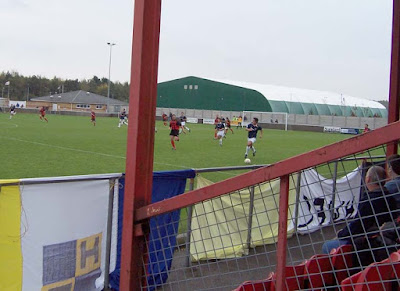 Waterlooville FC managed to take on Northampton in the 1st round in 1983/84 (and even took them to a second replay) but on the 3 other occasions they made the first round, again it was fellow non-league opposition. Two years ago we went out to Salisbury (division below) and they ended up playing Sheffield Wednesday at Hillsborough. Bum.

It's all ifs and maybes now though, particularly as Cirencester have a very winnable away tie with Ramsgate to look forward to, but they were better than us, despite our periods of pressure, and deserved this 'upset'. I also admired their experienced defender Adie Viveash's attempts to prevent our man Dave Town from getting booked. Fair play, for that I shall watch Cirencester's progress with interest rather than bitterness.

However, aside from their beautifully struck but ill-covered free-kick opener in the second minute, and the second headed firmly in at the back post from a corner, there was little else that caused our keeper Gareth Howells too many problems (aside from some pretty shocking goal-kicking), but they took their chances, while we did not until it was too late.

The fact it took a a lad trialing from a Sunday league side to score our consolation just prior to injury time, shows that without Rocky Baptiste (suspended after his Yeading misdemeanour), our striking options are not limited. Indeed Simon Patterson, who started alongside Dave Town up-front and has history at Watford, was being referred to by some after the game as the worst player yet seen in a Hawks shirt. When a 6'5" forward doesn't win one header in the entire 90 minutes, you find yourself hard pressed to argue. 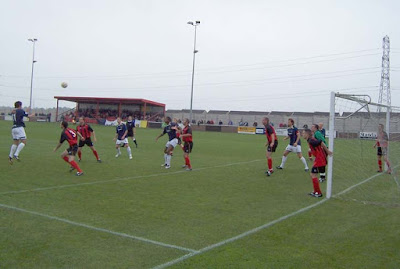 It seems our team is either white hot or white dog shit this year but some blame has to be put at our manager's door for this one. The opposition was clearly underestimated when the starting line-up consisted of several left-backs strewn across the middle of the park, with one of our better performing midfield men, Jamie Collins, left on the bench. It's not a huge surprise though, the two previous seasons have also seen us exit to sides from the Southern League. One comment, dripping necessarilly in sarcasm, on our message board sums things up very well:

"Its just as well we have lots of these silly tin pot cup competitions, so that we can tinker around with different formations. If i knew i was gonna be watching a training session, I might have stayed at home." (Hamster)

Considering my elaborate route from Liverpool to London to Havant to Cirencester and back over the weekend, I would hope you would forgive me for echoing the sentiment, however nice it was to travel to a game with my buddies for a change. I will jump back on the horse soon as this jinx thing of mine is starting to depress me (and it'll ostracise me soon, no doubt).

At least I saw a goal this time though. My first in 383 minutes. I clearly am the Azerbaijani forward line of Hawk fandom.

ben from footballtoyou.com here just to let you know I have added a link to your blog on both of mine.

Will keep checking in really enjoy your posts