Given the choice, I would always prefer a cup match over a league game as a neutral. The finality of it, the death or glory, I guess. Not that participants are particularly gladiatorial in the FA Cup 2nd Qualifying Round. This IS the finest cup competition though. The nature of money in football at the top level means that there are fewer surprises in the later rounds these days, but has the magic died? Not if you look hard enough. The qualifying rounds are as much part of the road to a hopefully-built-in-time Wembley as the quarters and the semis, giant-killing in relative terms going on across the country from August onward.

There was certainly potential for it here, with North West Counties league Skelmersdale up against Bishop Auckland, 1 level higher in the second tier (i.e. First Division) of the Northern Premier League. Both former FA Amateur Cup winners, although Skelmersdale’s win in 1971 and runner-up spot in 1967 are dwarfed rather by Bishop Auckland’s frankly gluttonous 10 wins and 8 defeats in finals between 1895 and 1958. With the Amateur Cup now defunct, and it being all semi-pro in these waters these days, not to mention the Trophy and Vase being respectively appropriate for their current status’, the only chance of these two clubs meeting occurs in the FA Cup, which adds to the intrigue factor - the first stepping stone to magic. 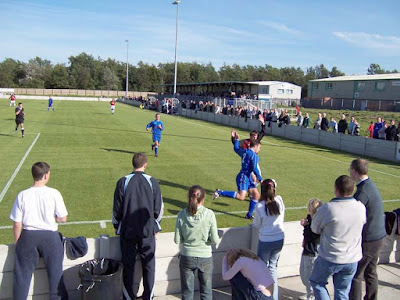 Of course, a Skelmersdale promotion could eventually bring this combination about, and everything appears to be in place for that to occur. For a start their functional and neat ground is only a year old, although initial drainage problems, combined with success in the knockout cups, meant they had to spend pockets of last season decamped at Burscough and Formby. Assuming the turf, which looks like a freshly Shake n’ Vac-ed carpet today, holds out through the oncoming winter, Skem will be in an ideal position to cope with life back in the Northern Premier League. They had 6 post-Wembley-glory years there in the mid-70s before the costs of professionalism got too much, but with the Unibond’s pyramid status now reduced, the structure at the club looks just about right for them to go up, stay up and possibly progress.

It’s all going according to plan on the field certainly, as after 9 games in the North West Counties top division, they have yet to drop a point, on top of which they have sailed through 3 FA Cup qualifiers prior to this. After beating Liversedge in the Extra-Preliminary Round, they have taken two higher division scalps in the shape of Colwyn Bay and the rather beleaguered Runcorn FC Halton. So, as I say, all the ingredients of a potential ‘giant’-killing right here, right now. 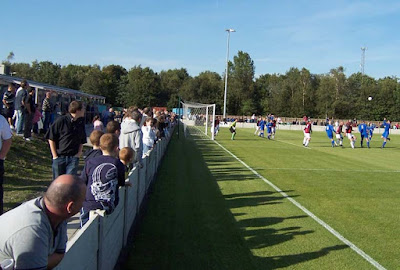 It certainly appears to have captured the imagination of the local populace with a very healthy crowd in, particularly in a week when the merits of the Premiership have been drawn into question, and also when you consider the general attendance trends at this level in the North. It is especially good to see loads of kids here, albeit largely running about in their own games on bare patches of earth around the stadium. Some are slightly less social, one young lad rolling small rocks quite aggressively down the pitchside pathways, utilising passing legs as makeshift skittles. Nonetheless, whatever their distractions, they are part of a very friendly, very jovial FA Cup atmosphere, all played out in hazy September sunshine. Ideal. Even the assistant ref gets a warm welcome, particularly from the Scouse contingent in.

Fan: “Aye, I heard she was a scrubber” 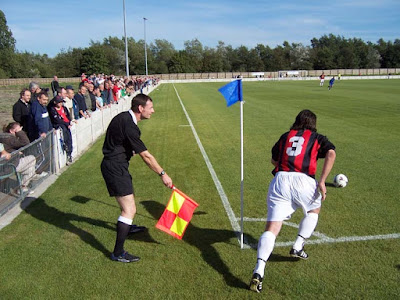 Needless to say with all this rose-tinted waxing, the game finishes without a goal, but not without a fair amount of effort from both sides. A fairly entertaining scoreless draw compared to some, but certainly it will be Bishop Auckland who go away the least satisfied with the result, considering they squandered several excellent chances to wrap it up, particularly in the second half, by which time the tall, rugged Skem central defenders have begun to tire, and the offside trap is beaten time and again, assisted in one case by a suicidal backpass, but each time the Bishop Auckland forwards snatch or slice.

However in the most part, it had been a fairly even game, with Auckland making few holes in the Skem defence who hassle well in the first half, which has the effecting of creating less pressure on themselves and allowing the midfield to make exploratory forays into opposition territory. Having started the second half the brighter, full of confidence, pushing wide and winning several corners, the final moments sees them flag, with the centre-halves little more than walking. Come the whistle, they may have been quite grateful to hear it despite it signalling the prospect of a long midweek journey to the North-East. However, they go with a much better idea of what they need to do. Attack early, and take their chances, and another moose-head could reside above their West Lancashire fireplace.