If you place the Welsh Premier League into the ‘haves’ and ‘have nots’, you would likely find that the ratio would come out at about 1:17. Certainly Total Network Solutions, commonly known as TNS (probably to the annoyance of their business benefactors), have enviable means. The only fully professional club in the League of Wales, a twinning arrangement with Chelsea, regular league-title contenders and foragers into Europe and a club with plans for a new purpose built stadium in a more populous area, albeit geographically in England, afoot.

TNS are the old Llansantfraid FC, which has since swallowed up Oswestry Town in a merger, and it is the latter town to which they plan to move to exploit a potentially higher support base than their current village home can offer. Taking the name of a business is not unusual in European countries but usually as a prefix to allow supporters to retain a geographical bond. 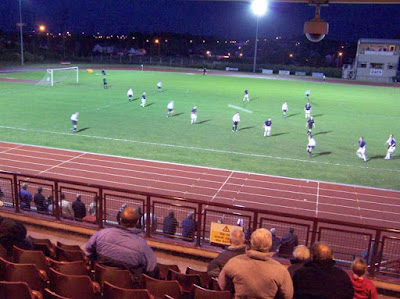 I guess it is not so easy in this case with Total Network Solutions Llansantfraid & Oswestry Town United FC hardly being conducive to succinct and effective chanting, not that that seems to matter on the largely lifeless terraces of the Welsh Premier League. Tis a weird one, are you supporting the team, or are you investing positive energy into the marketing of a computer hardware and systems business? I suppose if your team’s winning week-in-week-out, bagging league titles and affording European adventures, including 2 highly publicised legs against a set of European Champions forced to slum it in the following year’s qualifiers, then you’d be pretty happy to be a Total Network Solution til’ you die (or til' you get head-hunted by another club).

Today’s opposition provide, in terms of this season, quite a visible contrast, as while TNS sit top, Connah’s Quay prop them up, as well as the 16 others, which threatens their ever-presence as a League of Wales founding club. The Nomads have yet to win a game, or even get a point, so facing up to the in-form champions, even at home, is perhaps a little daunting. They needn’t be over-awed by that ‘twinned with Chelsea’ thing that TNS can boast though as Connah’s Quay have their own arrangement with Manchester United. Clearly there is good young Welsh talent on show here already on one or both of these sides as Welsh Under-21 coach Brian Flynn props himself against a pillar at the back of the stand to take in the game.

Calling the Deeside College Stadium home, despite that creating a titular falsehood, the Nomads came into being in 1946 as Connah’s Quay Juniors, taking on their new name in 1952 at which point they had only ever played their football at one home. The Halfway Ground, that a prior club Connah’s Quay & Shotton had used between 1920 and 1929, remained the Nomads home until 1998 when they christened the Deeside athletics facility. Never a leading light in the top-flight, they have stuck up there while bigger clubs like Barry Town have over-stretched themselves and departed, but this season looks as though it could be a long one. 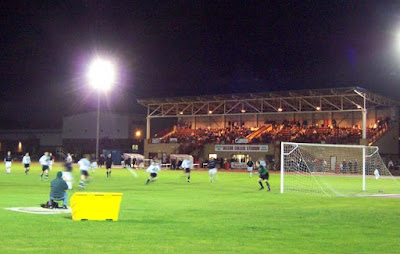 On the face of the opening exchanges, those not in the know may have struggled to pick which team it was who stood up to Liverpool's millionaires a couple of months prior. However, it is clear that Connah’s Quay are eager to assert themselves against the pros and get their tackles in, as two early yellow cards are shown for their trouble. TNS finally breakthrough and show their extra class and fitness in the 38th minute with a nice, flowing move ending with an untidy header at the far post, causing brief commotion amongst the reasonable gaggle of away supporters. As I said, vocal support in unison is rare in this league, which is a surprise considering the predilection for choral singing in this part of the world.

The lead is doubled in the 55th minute with another far post header, this time from a corner and much cleaner in execution. 10 minutes later TNS are reduced to 10 men, a rough challenge on the no. 5, who makes the most of it up to the point the player is tunnelled. As a result his every touch is booed from then on. 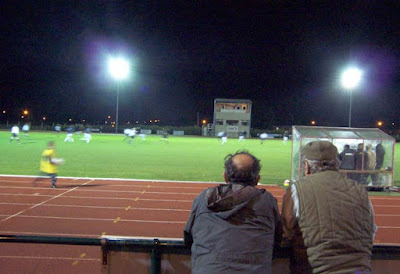 At no stage do Connah’s Quay look able to make the most of their one man advantage, an advantage they lose in the 89th minute as TNS go 1 on 1 with the keeper who dives to save at feet albeit, rather unfortunately, about 8 yards out of his area. He instantly holds his hands to his head knowing his fate but feigns an injury with it in a rather pitiful plea to leniency. It holds no water and so, an outfield Nomad takes the jersey. It goes to the be-mulleted number 5, but sadly there is no time for any heroics/just desserts to be apportioned out.

Certainly not the rout that might have been expected, but at no stage were TNS truly threatened, and at no time could you say this game was in any way exciting if I'm honest. That appears to be the League of Wales' trouble, it could be a very intriguing, interesting league, but one team's dominance and abject apathy on the terraces means the marketing campaigns will have to work hard to increase the attendances that remain in the low to mid hundreds across the board.
Posted by skif at 5:03 pm

"He instantly holds his hands to his head knowing his fate but feigns an injury with it in a rather pitiful plea to leniency"? Reminds me of a certain young Toon centre-back against Villa last season - this guy obviously needs to work on his amateur dramatics, though...

Aye, that was a classic. Apologies for reminding you of said game though!

Bet yer man thought his spaghetti westernisms would be forgotten considering what went on after.

my cousin plays for connahs quay nomads, he used to play for tranmere rovers. Unfortunately i would have to say there are only 2 players that are any good on the team , as far as professionally goes.
firstly jon kenworthy(and yes i am biast)
the other is stuart rain