Regular readers will no doubt have spotted by now that this hobo has a preference for those games that intrigue at angles other than what will occur on the field, and so it is with this, what will be a rare Tuesday night on this season’s tread. Tonight offers a rare chance to visit Valerie Park, the home of Prescot Cables, to watch Prescot Cables play away.

At face value, this is easily explained, as last season Cables took in Runcorn FC Halton as tenants after they could no longer meet the rent payments demanded by then landlords, the Widnes Vikings rugby league side. Runcorn’s relegation from Conference North also meant that this season would see the first league fixtures between the two sides, Runcorn leading three to zero in cup tie victories. This tally though is to be expected when you note that 2005/06 is the first season that Prescot haven’t been in a lower league. 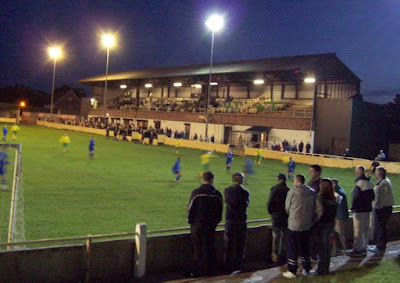 Surprisingly Runcorn are the younger team, having formed in 1918 (as Highfield and Camden Tanneries Recreation Club), whereas Prescot first came together in 1886. Despite their relative youth, Runcorn have not only been a touch more successful, but were one of the leading lights of the Alliance/Conference in it’s first decade or so, winning the top tier of non-league at their first attempt in 1982, 4 years before promotion/relegation became right and not privilege.

So how did Runcorn come to find themselves not only down at the third non league tier but, with 7 games of the season gone, only 2 goals of difference keeping them off the foot of the table? Three instances of bad luck during the 1993/94 season can probably be pinpointed as the start of their rut, as a perimeter wall fell down during an FA Cup tie with Hull, a roof blew off a stand in high winds and the main stand was decimated by fire. The cost of repair meant that Runcorn could not afford the resources required in the increasingly demanding Conference and were relegated 2 years later.

At the end of the millennium, they took the step, in the face of decreasing crowds, of selling their Canal Street home after 82 years in residence and moving across the Mersey into the neighbouring borough of Halton to share Widnes’ 11,000 capacity all-seater stadium. To attract new supporters they suffixed themselves with the name of their new home in an attempt to represent the two boroughs, but this did not have the desired effect with fans rattling around even in the one open stand that was required. As such, the increasing rent costs became too much for them and they moved in with Prescot towards the end of last season. 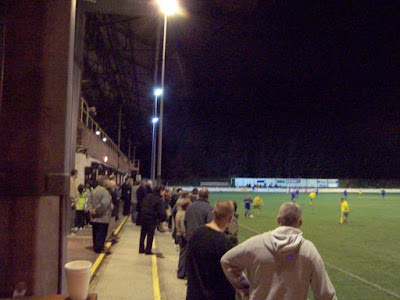 So while Prescot seem upwardly mobile if, perhaps at the pinnacle of their realistic ambitions for now, Runcorn appear to be in free-fall, a desperate situation that throws up this unusual circumstance. For tonight the Prescot players must turn out on their home pitch in away shirts and occupy the mysterious ‘other’ dressing room, although I imagine the away team’s facility will tonight see miraculously working radiators and hot running water for the first time in aeons.

It is the fans who are most inconvenienced, the Prescot website stating stubbornly prior to the game that “the Supporters Club will NOT be running a coach to this match!!!”. The amount of exclamation marks there possibly implying that they had been inundated with requests, and were getting pretty sick of it. Of course, it’s probably more likely that it’s merely a signpost to an elliptical ‘arf’, but I prefer the notion of curmudgeonly grumpiness being let loose across the net.

The turnout is roughly the composite of the usual home attendance for both sides so while the terrace beneath the raised stand teems with more life than usual, it looks as though few others have been lured by the local derby intrigue. Perhaps it’s the fact that the seats in the stand appear to have seen better days, possibly at several other grounds considering the patchwork of colour on display. Whatever their origin, not enough appear to have been purloined as about a quarter of the base concrete ‘steps’ are left bare providing terracing, I can only assume, for those who not so much laugh in the face of vertigo, but stick their tongue under their bottom lip and call it ‘Joey’.

Despite being 7 places behind Prescot in the table prior to the game, it is Runcorn who start the stronger, making the most of their efforts in the 13th minute, the striker connecting beautifully to steer it past the oncoming keeper. They double the lead after 43 with a blistering strike from outside the area. Prescot’s best chance comes in the substantial (but justified) injury-time at the end of the first period, as a looping cross-cum-shot (there’s probably a better phrase for that) floats in and Robert Holcroft has to be alert to tip it over. Largely thought Prescot have been wasteful coming forward and brittle at the back. 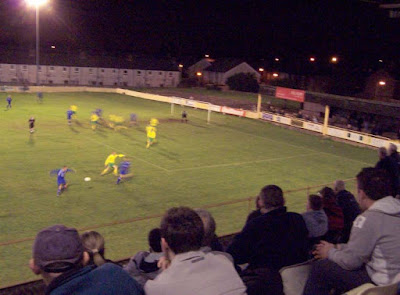 Two minutes into the second half and a carbon copy looper occurs at the same end but Prescot’s keeper Ryan McMahon deals less successfully with the flight, slapping it with both arms into the net like a petulant child mid-tantrum, to the sound of much un-stifled laughter from the terraces. A further two minutes elapse before again there is an almighty cock-up in the Prescot defence, a header bypassing McMahon who has rushed well out of his area and, as his face goes Soviet, the ball trickles alone into the net.

On 71 minutes, Prescot finally get somewhere, being first to the ball in the box for a change and slotting home. It appears that it takes a four goal deficit to start the Prescot engine as they largely dominate thereafter. The chance to make it respectable is taken away from them however, when Runcorn catch them on the break playing some excellent passes before the defence and typically flailing keeper are danced through for a 5th to be hit.

For a club in crisis, Runcorn appear in fine fettle this evening, the support that have stuck with them through the thinning watching this evening’s proceedings with jaws dropped. Not too many nights like this these days I shouldn't wonder. Hopefully this can the catalyst for a reasonable season for them. However with the club showing no immediate sign of returning to Runcorn, and unable to afford the Halton Stadium, perhaps it’s time they changed their name again. Not back to Runcorn, too obvious. I’m thinking totally TOFFS retro style as Highfield and Camden Tanneries Recreation Club.

Now that would look pretty impressive on a modern scarf, I reckon.
Posted by skif at 6:25 pm

I'd forgotten all about Runcorn.

They had a cracking team in the Conference in the late 80s, sad to see that it's all gone pear shaped for them now. Indeed it;s been a pisspoor time in recent seasons for the smaller Cheshire clubs- the farce down the road at Northwich being another case in point.

BTW, turn on your word recognition & deny anonymous posts to avoid comment spam like the one above.

Cheers for that, Steeplejack. Read your latest this morning. Hope your boys give you something to smile about soon.