After the excitement of the Ashes and the quite astonishing reception afforded a bus-load of shit-faced cricketers under the good eye of Lord Nelson last Tuesday, it has been perhaps easy to forget that the English summer is not quite finished yet. By this Sunday it will be, but there’s been plenty of business in the meantime. The county champions, Nottinghamshire, have since been crowned while Essex had the Totesport league sown up a while ago. Nonetheless with two divisions these days, issues of promotion and relegation were largely still to be settled. One pressing concern here was that Sussex needed to win to be sure of upgrading themselves to the Totesport top-flight.

Kent won the toss and put Sussex into bat, making an early inroad in the 4th over, with Matt Prior, the day before his call-up to the England winter touring party, caught behind by England glove-rival Geraint Jones’ county understudy (and Irish international) Niall O’Brien off Robbie Joseph for 4. After that however, Sussex captain Chris Adams joined Richard Montgomerie for an excellent partnership of 111 before both were dismissed within 7 balls of each other. I imagine that, somewhere, an old man was hopping from foot to foot. 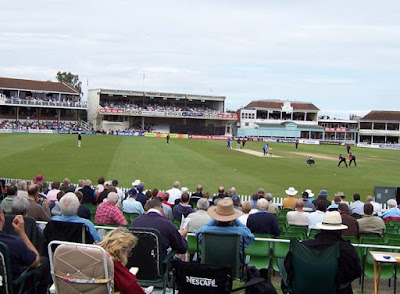 It was ex-England temp Martin Saggers that did for Monty in an awesome second spell of 2 overs for 3 runs and said wicket, which followed another fairly economical first spell of 5 overs at the cost of 16 runs. His 3rd spell was a touch different, but certainly spectacular, the 12 balls seeing a run out, and Mushtaq Ahmed caught off the final ball of the innings, yet also 27 runs heaved to all parts of the St. Lawrence Ground as Sussex finished a bits and pieces effort from the middle order with a spirited flourish. Nothing spectacular from the Kent bowling all told with the numberless Totesport debutant Neil Dexter being particularly comfortably dealt with.

Dexter’s day continued in an ignominious vein when, opening the batting for Kent, he was bowled 5th ball into (England temp 2003 vintage) James Kirtley’s opening wicket maiden. This set the stall out for an afternoon of Kentish struggle with the top order collapsing in quick succession. The main catalyst came at first change, with Robin Martin-Jenkins replacing Kirtley at the Nackington Road End. While his first two deliveries were both carved to the boundary by Matthew Walker, his 3rd and 4th did for the Spitfires skipper, caught going for a 3rd big shot which wasn’t really on, and Darren Stevens first ball caught behind by Prior.

6 overs later and come Martin-Jenkins’ 3rd wicket, Kent found themselves 48-5 and pretty much out of it. Michael Carberry had a crack at making things interesting scoring 51 before falling leg before to the final ball of Kirtley’s second spell. Niall O’Brien kept him company for the best part of an hour for a solid 28, while Simon Cook and Robbie Joseph managed a final death rattle to keep things from being too embarrassing. 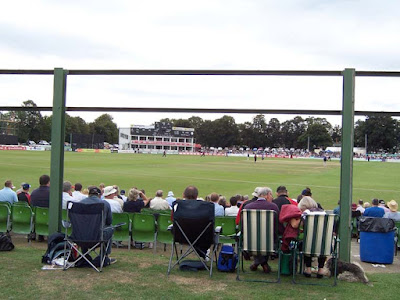 All in all it was the bowling what won it, with particularly good stuff from Kirtley and Rana Naved-ul-Hasan, whose one wicket was not suitable reward for a tight, consistent spell that asked many questions of the Kent top order.

So not a tight finish, but some excellent stuff to watch from the Sussex attack, and in particularly nice surroundings. The St. Lawrence Ground is yer more old fashioned county ground with a higgledy-piggledy mix of different stands named after county legends (Colin Cowdrey, Stuart Chiesman, Frank Woolley), hospitality chalets and a good deal of tip up seating spreading most of the way around the remaining boundary.

It used to be the case here of not being able to see the leather on wood for the tree on the Dover Road side, the famous old lime occupying the best seat in the house, often from within the boundary rope depending on which pitch strip was in play. Had it survived the storms last January, it would have been outside the field for today’s game and indeed its thick surviving stump has been moved outside the advertising hoardings, and replaced with a younger model. It isn’t quite the same really, but give it time and another of cricket’s eccentricities will be back in full glory. 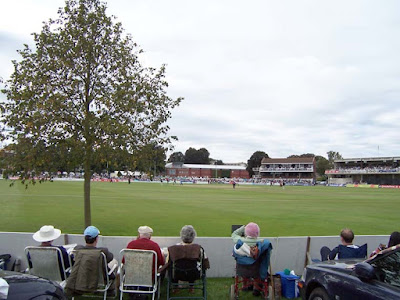 The presence of a tree, any tree, still seems to hold mythical qualities for the Kent support despite the sunrise/sunset passage of time, one supporter telling us he always ends the last home game of the season with a touch of the tree for luck, before doing just that.

Others are less respectful, using it as a makeshift wicket for their post-game knockabout.