The close season always sees non-league teams fighting to attract the professional clubs to their patch for a friendly fixture. Usually the big boys turn up with a gaggle of academy starlets, sidewardly mobile stiffs and the terminally injured to entertain what, more often than not, ends up being merely the diehards and those without shopping to do.

This summer Yeading got to play Newcastle. The first XI. At Newcastle. Can't be bad.

Of course, this all came about as a result of Newcastle exiting the Inter-Toto early, needing a fixture and wanting to keep a promise made after the two clubs had met in the 3rd round of the FA Cup back in January, a Yeading home tie that had to take place away from the Warren at QPR’s Loftus Road. Coming here today and noting the facilities, which don’t actually meet Conference standard, it is obvious that a competitive fixture against a Premiership side could never have happened here. I believe they have 3 years grace now to get things up to scratch if they want to keep their place in the Conference South.

Yeading’s big star of that Toon game, DJ Campbell, has moved onto bigger things at Brentford (finally, after many year’s trawling the London semi-pro circuit). The other stand out that day was keeper (by day a mild mannered civil servant) Delroy Preddie, who kept out the Premiership attack for 51 minutes, possibly motivated by The Sun’s incentive sponsorship that saw each quarter hour of clean sheet rewarded with increasingly exotic prizes. As it goes he manages a clean sheet today but aside from any bonus written into his contract, is some warm appreciation from we visiting fans, which is made all the warmer by the fact that nearly all his team-mates are the focus for some severe Hawk bile before and after the final whistle. More on that later. 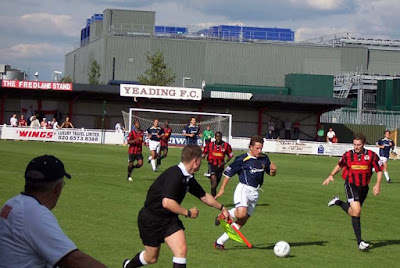 Preddie was probably quite grateful for our applause, as despite the high profile live-on-BBC1 cup-tie, Yeading cannot boast a high support base, and those that do show up make little in the way of encouraging or celebratory noise. With so many clubs compacted together in London, there just isn’t the support to go around. Hayes, also of Conference South, are only 2 miles away, and despite recent history in the top flight of non-league football, attract only a few more each week than Yeading. The option to fly in some support exists, what with Heathrow just down the road, planes descending in quick succession behind the goal at the far end.

That has been the downside of the restructuring of the non-league pyramid for me. While travel costs are down for clubs, and we are arguably in a higher profile league now despite being at the same rung of the ladder, those of us fans who enjoy a good beano miss the big away days to the Midlands to take on comparatively well-supported outfits like Hednesford Town, Kings Lynn, Stafford Rangers and Burton Albion. More often than not good-natured rivalry and banter took place, but that was certainly not the case today.

A first half decision to send off H&W striker Rocky Baptiste, who has been a revelation since joining to fill the massive shoes left by Dean Holdsworth’s departure to Derby County, for raising an elbow caused some consternation amongst the away support, although some thought he should go, the rally of punches thrown by the Yeading no. 9 in retaliation getting merely a yellow however brought about very overt rage amongst my brethren. 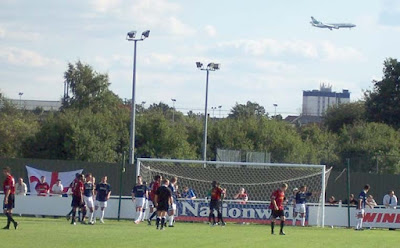 Sadly, with this continuing on for ages afterwards with hostile words exchanged with Yeading fans at half-time and a volley of swearwords cast, most upsettingly from our younger followers (very much pre-teen and very much potty-mouthed), I didn’t feel proud to be a Hawk today. The game at this level is as much about the atmosphere as it is about the football; usually it is a passion that doesn’t spill over into unchecked fury. Usually.

I do realise though that people only get het up about decisions they feel are unfair because they care and while football at this level might seem small beer, to fully partake in it is just as intoxicating as the over-indulgent stein of the Premiership or the frothy pint of the old Divs 1-3. To be passionate about one's club is surely preferable to offering nothing in the way of encouragement. I love to sing up for my club, I hate to sing about how crap the opposition is. That latter caveat is not one that is shared by all.

My only issue with it is when caring about percieved injustice goes too far, and becomes a far bigger flame than the spark should really have caused, killing the relationship that non-league fans should instinctively have. We support our clubs in the absence of glamour, and are kindred in that if nothing else. I guess that’s how it is though. Your football club is like your family, you can’t choose who else is involved. Certainly some football fans thrive on angst but we cannot all be cut from the same cloth. 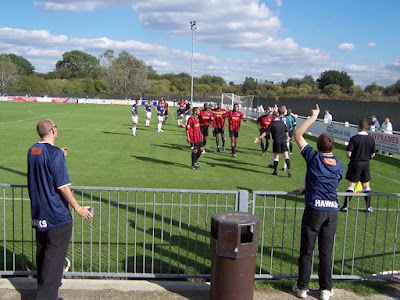 I can, though, take a defeat like this. Shit happens, and the performance was not all that bad considering the 1 man disadvantage. Although I am getting a little concerned, after the played 8, lost 6 record in games I attended last season, this is not an auspicious start to my Hawk calendar for 05/06, particularly coming after 4 on-trot wins where, by all accounts, some delightful football has been played, creating a positive, hopeful atmosphere not seen as West Leigh Park since the FA Trophy and FA Cup runs of the 02/03 season.

Ah well, it happens to be FA Cup time next week as we enter it at the second qualifying round stage. Maybe it’ll be us playing Newcastle come January. We can but hope. Such is the lot of the sad non-league bastard.
Posted by skif at 12:00 am