East Stirling are a little miffed just now. Despite eschewing media advances to cover their notorious lack of on-field success in the past, they accepted £2000 a year ago for an author to follow their 2004/05 campaign. The book, published this week, is not as wholly kind to them as they would like. It is called ‘Pointless’, which seems a little unfair considering they managed 22 points last season. Indeed, credit where credit is due, this was one more point than they had accumulated over the previous two seasons put together.

East Stirlingshire then, the missing answer every time when the question ‘which 5 Scottish league sides begin and end with the same letter’ gets posed. East Fife, Celtic, Kilmarnock and Dundee United aren’t so tricksy with any scant and subtle abbreviation. You might know them as East Stirling, and you may also be aware that they have been rooted to the bottom of Scottish Division 3 for 3 seasons now. However, with no obvious accession to the pools coupon for Scottish non-league sides (aside from the occasional restructure, or indeed a liquidation for Airdrieonians) and no relegation beyond the 3rd, they have gone precisely nowhere.

They are as close to amateur as the semi-pro end of the Scottish Leagues get, reportedly paying their players a mere crisp tenner for each game, and it is perhaps for this reason that they only played one pre-season friendly, against Kirkintilloch Rob Roy, prior to a daunting season opener away in the Bells Cup to Dundee. 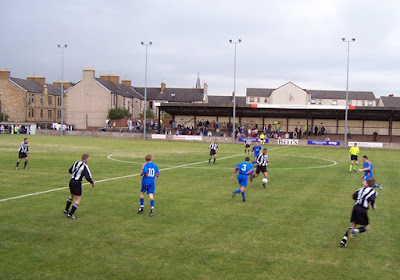 The £10 wage may seem quite democratic and a hark back to the old days of football, but when you consider Stevenage Borough at level 5 in England are reported to be paying one player £1200 a week with free accommodation and a car, you can see just how breadline they are.

Indeed, the fact that Gretna and Peterhead (both fairly recent entrants to the Scottish leagues courtesy the windows of opportunity I mentioned earlier) could be promoted from the division last year with a 27 point gap between them and the rest (and twenty further points between each other) cement the idea of a big divide between the haves and have-nots in Scotland. You could argue it’s 2 of the former and 38 of the latter, but Hearts do seem to have some cash to splash, as does Gretna’s sugar daddy.

Even Queens Park, tonight’s opponents, are certainly not a major player in the Scottish leagues, but they still get to run out at Hampden Park every other week, even if it is only 1% full for their home games. East Stirlingshire call Firs Park home, and it’s particularly earthy, with one end a sheet wall of concrete, the opposite end an overgrown terrace unusable except as an access path to the neat little main stand, which sits opposite a decent stretch of covered terracing.

The pitch is, according to the SFA, too short for a professional licence, although the club are being given time to sort it out. Major work is something this club can clearly not afford, but there has been talk of a move to Grangemouth Athletics Stadium and even a name change to Grangemouth to suit. Considering an East Stirlingshire side have competed in the Scottish League since 1900/01, this would be a major step, but in fairness their fan base probably isn’t big enough for there to be too much grumbling about tradition. 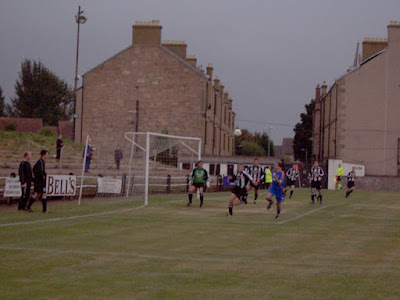 They also suffer from being Falkirk’s second team, with their bigger cousins newly acceded to the Premier League. Falkirk’s old ground, Brockville, used to be a stone’s throw away from Firs Park but that is now a gleaming Morrisons and Falkirk play on the outskirts of town in a brand new stadium dominated by a handsome and huge main stand.

This development does though allow East Stirlingshire’s PA announcer to come out with a pearler of a line in his spiel: “There’s only one team in Falkirk [comedy pause] town centre”. It is pretty much the only line you can discern though as his brogue wraps around a scattergun of words that fire out with something near to an intake of breath once every 8 minutes. He clearly has a lot to monologue about and little time to do it. Shame then that I understand little of it, apart from some choice comments on the ‘Pointless’ book, and the phrase “Be part of the Shire in-crowd”. I imagine there’s not much of an out-crowd in truth, an exclusive club of masochists and the sympathetic certainly. However thanks to their so-bad-it’s-good notoriety, they are able to wear Littlewoods Pools only ever team sponsorship across their midriff, which probably helps in their quest for player-appeasing tenners.

It is perhaps a much better deal than for the Queens Park side who are sponsored by Irn-Bru and all decked out handsomely in blue and orange away shirts seemingly so as to resemble a can of the stuff. However, the officials seem intent on winning the pre-match fancy dress going, as they do, for the cyberpunk bicycle courier look. An opportunity for a quick thinking steward with access to a flag, and possibly a cosh, to cause potential match-winning confusion. Sadly this opportunity goes untaken.

Despite early East Stirlingshire pressure, it is Queens Park who look the far more assured and just sit back waiting for their opportunity. It comes regularly, and is capitalised upon 3 times in the first half. As the second hits the back of the net, one local woman behind the goal turns to another and says “this is shite, eh?”. You’d think by now they’d be used to it. 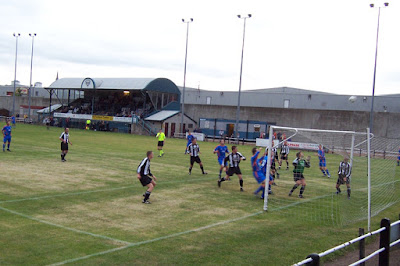 However the Shire then rally and cause their keeper to make a great full length save while also bulleting a gilt-edged headed chance over the bar. Nevertheless on the stroke of half-time, a free-kick 28 yards out is curled in calmly and deliciously by Paul Harvey. It is the penultimate kick of the half. During his half-time verbal sluice, our man with the mic reminds us that tonight could go to extra time and penalties, “it might do…wait and see”. You can’t knock wide-eyed optimism like that.

Two minutes after a shot is blocked on the line, East Stirlingshire finally get on the score sheet courtesy Iain Diack, and our man on the tannoy’s message could not, unexpectedly, be clearer. “Game on!” he says, as though having never before been to Firs Park.

The comparatively numerate away throng are all too aware though that their passage into the next round of the CIS cup is assured, particularly when the Shire’s Stephen Blair is tunnelled for a second bookable after 75 minutes. Despite an official nickname of ‘The Spiders’, they appear to sing ‘Come on you Queens’ by way of celebration. Coming from a bunch of Glaswegians, this is progress indeed.

I thoroughly enjoyed this excellent article. I too would like to visit The Shire's ground. Can't wait to read "Pointless"
Basher 61, Havant

Love the pic looking down the road between the houses.