In and around Paisley of a matchday early afternoon, Rangers and Celtic shirts powerfully outnumber the one or two St. Mirren shirts in the town centre. This is perhaps unsurprising considering the duocracy at the tip of Scottish football. After being a firm fixture in the Scottish Premier in the late 70’s and 80’s, there has only been one brief peep over the top-flight parapet (in 2000/01) since relegation in 1992. Being just down the road from Glasgow means the big two do not have to extend their reach far to sweep up the success starved.

Despite being at the Western extreme of the ever burgeoning Glasgow conurbation, Paisley certainly appears to have a separate identity and while the city is often associated with some of Scotland’s less agreeable attributes, Paisley stands as a symbol of old romanticism to the Scottish working class. It is a pretty town in parts, a glorious garden by the river housing a number of statue tributes to local heroes as well as to the ubiquitous Queen Vicky. Perhaps the less vehement devoluters reside in this part of Scotland.

The high street banners proclaiming Paisley a ‘Fair Trade Town’ suggest modern thinking, while the Plaza shopping centre’s piping of 30’s big band muzak rather than local-radio style semi-advertising blather indicates that it’s not all new school round here. It is a town in transition, allowing regeneration without the marginalization of their more senior citizens. 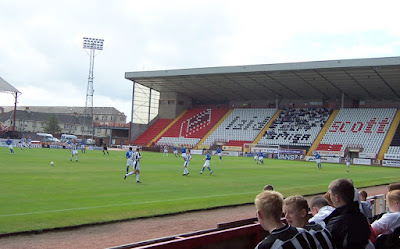 It seems history is important here, but perhaps not when applied to choosing your club, as St. Mirren stand equal with Rangers and Celtic on that score. All 3 were part of the original 10 founding Scottish League sides of 1890/91, along with not only Dumbarton and Hearts but Third Lanark, Cowlairs, Abercorn, Cambuslang and Vale Of Leven. The very least you can say of St. Mirren is that, despite everything, they have shown staying power.

Of late that power has been severely tested with long term debts and dwindling attendances crippling the club almost to the point of liquidation. The only alternatives had been to consider leaving Paisley after 128 years, or to sell their Love Street home to a supermarket chain and build a new facility in Greenhill Road, less than a mile away. Despite delaying their decision twice, the Scottish Executive recently decided not to call in the plans for re-examination after Renfrewshire councillors had voted against a recommendation that the planning application be turned down. The club should now be able to move forward, and also be the catalyst for regeneration in the northern end of Paisley.

For all their debt problems, they do appear to have tried to make some money back by issuing a myriad of differing kits. As I near the ground and the amount of Saints shirts gradually increase, each one appears to be a slightly altered pattern. Unless the fans have phoned round to co-ordinate their early season party dresses, it does seem that they’ve got through a fair number in the last few years as none look particularly faded or of quasi-classic 80’s what-we’re-we-thinking design. 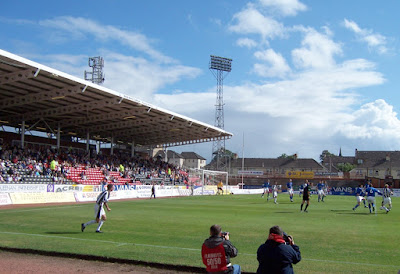 Also several bits of Love Street do seem quite new. While there are two corners that still feature crumbling, ramshackle and useless terracing, in-between the Reid Kerr College Family Stand was bolted on prior to their last Premier League season so they could comply with the 10,000 all-seater rule which has thankfully now been relaxed. Opposite that is the Caledonia West Stand which also seems quite ambitious. It holds up to 3,000 away fans but, needless to say, is rarely filled. Around 80 Stranraer followers attempt to look mobbed-up in it today.

Between these the Main Stand looks quite antiquated indeed, but it’ll be the more traditional features like this that will make leaving Love Street such an emotional bind. There are certainly reasons not to miss the place though, particularly the area in front of the North Bank tea-bar which in rather self-defeating manner smells aggressively of sick.

Furthermore one must wonder about the self-esteem of a town and its team when the imminent arrival of the players on the field is greeted not by ‘Fanfare For The Common Man’ or ‘Ready To Go’, but ‘Duelling Banjos’. ‘Tom Hark’ soon follows as they appear, but the free association reveals plenty. You can probably blame the money issues for The Coral’s ‘Dreaming Of You’ being aired twice, but a run out for ‘The Vengabus’ defies explanation. 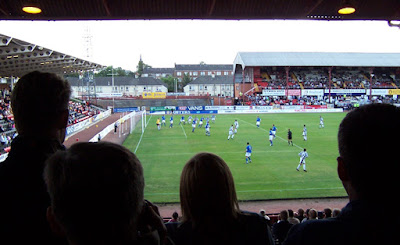 Despite their problems, both fiscal and in the music selection policy, St. Mirren do fit in more with the ‘haves’ of the Scottish First Division, such as St. Johnstone and Dundee, those who can look upwards and reasonably dream of the Premier League. Stranraer are one of those sides who are realistically at the limits of their ambition, only twice before appearing in the second tier of Scottish football since it went to 3 divisions in 1975 (and 4 in ‘94), finishing rock bottom on both occasions. As such they are seen by most First Division supporters as cannon fodder for this coming campaign.

However Stranraer, while looking incapable of anything genuinely creative, don’t see it this way, stoically resisting all that St. Mirren can throw at them. Although in fairness, for all their dominance, the Saints don’t cause too much bother in front of goal respective to their possession. It remains this way for pretty much the entire game, Stranraer feeding off the scraps and breaking away on occasion. The combination of Stranraer’s dogged, hassling defence and St. Mirren’s lack of imagination mean that by the 80th minute the home fans begin to get overtly restless. At this stage, if not from minute 1, Stranraer look more than happy to settle for a scoreless draw, their keeper Barry John Corr getting booked for time wasting as the final whistle approaches.

In the last ten both sides squander chances to steal it, but 0-0 it remains, the final whistle being greeted by a chorus of boos from the home support. Judging by today, you imagine some of the supporters may wish to list some of the players as fixtures and fittings that will not be needed at the new stadium. Stranraer fans will probably wonder if this is what it’s going to be like all year. It certainly won’t be a season of elegance and sophisticated play.
Posted by skif at 6:34 pm

You comment on the selection of music, with Vengabus and the Duelling Banjos being mentioned.

Vengabus will have been played because Stranraers version of that small group of eejit post-Green Street hooligans that most clubs have, call themselves 'The Vengaboys'.

As for Duelling Banjos, the reason is a little less pathetic. You see, Stranraer has a reputation in Scotland of being a town of inbred, six-fingered banjo playing whatnots.