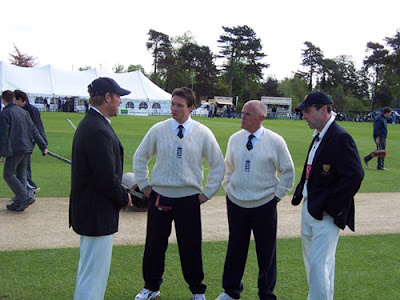 That scent of smouldering flesh, as sure as eggs is eggs, means my summer has started in the usual way. My first cricket of the season always runs parallel with my forgetting what the sun can do when you're sitting about underneath it for a few hours. Ah well, I can handle a bit of melanoma when given the chance to check out my county cricket club relatively near to my North West exilia.

Sadly I missed Hants C&G jaunt to Cheshire CCC last year, but luckily the draw threw up another nearby county, and good job it did, as this will be the final year that minor 'counties' (aside from Scotland and Ireland) will play in the C&G Trophy.

Like with football's FA Cup, most of the romance dies once the minnows are all knocked out, and now cricket's sole opportunity for the semi-professional/amateur counties to lock horns with the big boys as the ECB have changed the format for next year. Considering how many cricket lovers in this country don't live in the 18 main counties, this does seem like short-sightedness.

We have come to expect that of the ECB though. 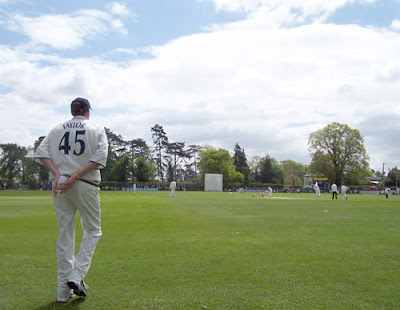 This match, while easily won by a Hampshire boasting twin startlets Shane Warne and Kevin Pietersen (who both shone brightly, Pietersen's 76 coming fro only 49 and included 6 sixes, such was his dominance of the Shropshire attack), highlighted the joy that can be had from coming to these modest grounds to watch some of the worlds best face a potential banana-skin.

Giant killings don't happen as often in cricket as they do in football, but to remove the opporunity completely (and it is a great money-spinner for the minors) makes for a very dull competition.

As I say, this was a great occassion, many turning out to plonk themselves in hastily procurred and arranged patio chairs, plus heaving hospitality tents for those willing to wear a tie on a day that saw plenty of cloud but when the sun made itself visible, it beat down hard. 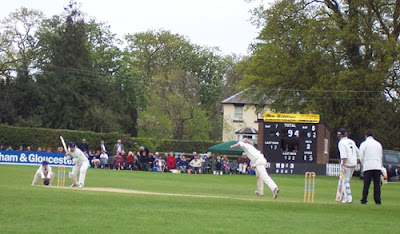 Many in attendance seemed to bemoan Shane Warne's decision to field first, hoping to see a full Hampshire innings rather than the 21.1 overs it took for them to knock off Salop's 132. However, with the potential of rain within the smattering of cloud made it the right decision.

Indeed there was plenty to admire anyhow. Pietersen won the man of the match award for his attempt to play the game like a Twenty20 tie, but kudos should also go to Shropshire's Jono Whitney for keeping the score respectable for his side with a dogged 39 low down the order, gamely taking on Warne's leg-spin genius. That he was stumped off Warne's bowling (a wide, as it goes) highlights how willing he was to take him on.

Good stuff and the early finish meant I didn't have to panic in getting back to Manchester to see Arcade Fire who were, as it goes, simply gorgeous.
Posted by skif at 2:15 am