So, to typify my H&W supporting season, another defeat (that'll be 6 in 8 for Jonah Skiffoid then). In the face of a rampant Grays Athletic high on crushing all-comers in the Conference South (a 23 point gap between them and second place Cambridge City tells all) and the FA Trophy (7-0 semi-final aggregates against a team from a higher level tell even more, with only Hucknall standing in their way in the final), it is perhaps hardly surprising. Grays were the only full-time professional team in Conference South, and it showed. 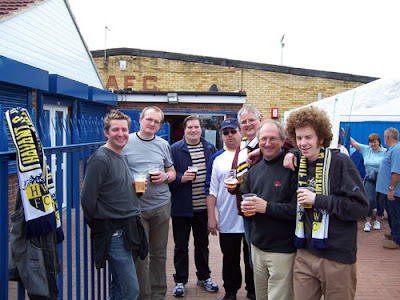 Added professionalism, of course, runs hand in hand with trumped-up arrogance. Today was their party, the Connie South mug due for presentation after the game, and as such my fellow H&W fans were prevented from putting up our usual array of flags. "It's our day" was apparently the whine of a Grays official who threatened to throw out all of our support for arguing the point.

On hearing this, our midfielder Robbie Pethick was apparently heard to say, 'if you lot get thrown out, we ain't playing', and seemed to mean it. Although anyone who saw Robbie's cameos on BBC2's 'Football Diaries' when playing for Weymouth will know that in brightness terms, he's not been attracting any moths lately. Can't fault the sentiment though. 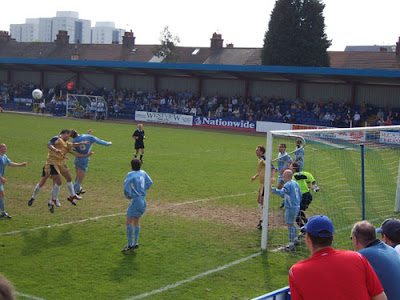 The over-officious Grays directorate did not get their hands on our shed-load of Colgate, brought and proferred in tribute to Dean Holdsworth's snow-white ivories. Check out the H&W zine site IGT Squawk for pictures of the terrace action.

Grays were better than us and deserved their victory and the title, but they did take the piss somewhat. For example, when awarded a penalty, they sent up their goalkeeper. The picture below shows our custodian Gareth Howells saving his spot, but sadly, he followed it in. The first half was a pretty hot and bothered affair, the humidity playing its part. The Grays fans spent ages reminding Dean Holdsworth about his early 90's sex scandal. It was noted by our support that when calling for crosses, his raised arm was topped off with a raised finger. Guess which one.

Indeed, when Dean curled home a quality finish, his celebration in front of the Grays support was, rather understandably, less than gentlemanly. An offside flag never makes for ideal viewing after such emphatic gusto. That's gotta hoit. 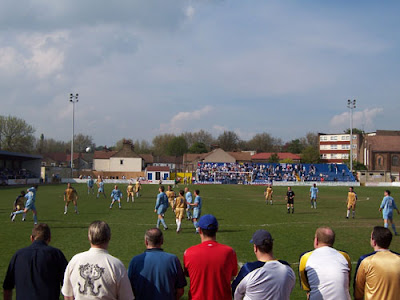 Grays' Recreation Ground is an odd box, as the balconies of adjoining flats lean over the ground, and it seems Grays fans reside in several of them. Blue wasn't the only colour fastened to the mast though, as you'll note, which caused rabid drunken heckling from the Tory in our number. 'Shut up about fuckin' politics' was our man Malc's succinct and spot on request.

The Rec is perhaps not the ideal setting for Conference National action next season, but the Grays squad look poised to acquit themselves well on the field.

Hopefully, after two seasons requiring a late spurt to raise us from gloom, we can get a good start off the blocks next season and, not just for selfish reasons, I'll get to see us win a bit more often. A Trophy run and the FA Cup 1st round away to Nottingham Forest will do me n'all.