What’s to do in Wrexham then?

A stroll through the winding centre finds a chap, vimmed up on paraffin, juggling fire beneath the shadow of the impressively tall parish church of St. Giles (Eglwys Blwyf Sant Silyn), the Liberal Democrats dismantling their campaign gazebo on the high street and, further down, a couple simmering with bitterness arguing through pursed lips. Marvellous.

Another option is to partake in some Cymru Alliance action. It’s an option not many will take up.

Most teams are named geographically, some in relation to a works social club, others after a significant figure in the history of their team or locality. It takes a club of real mettle, though, to handle themselves with a bingo pun that even Richard Whitely would put on the ‘maybe’ pile. The rest of us will pucker and draw hard upon our teeth, a groan seeming too anodyne a response. 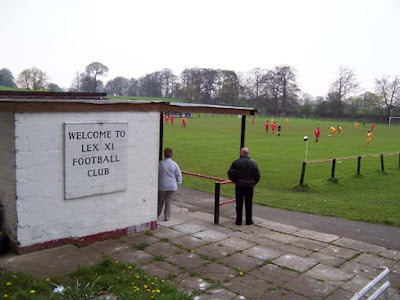 A group of Welsh solicitors and their associates formed the club in the mid-sixties, naming themselves after the Latin term for ‘law’. We can assume they added the ‘XI’ so they didn’t look like snooty highbrow bastards. As long as the man responsible didn’t label himself ‘Wacky Dave’ (or such) or ever uttered the phrase ‘I’m mad, me’, I think we can forgive it.

Must be hard though to attract regular support if your hardcore would merely precede their whispers of encouragement with the spluttering cough of self-awareness.

It is also problematic that any support coming by train are immediately confronted by the Racecourse Ground looming relatively large over the station. Bizarrely, Lex XI played at the Racecourse for a season, and are now a mile away at Stansty Park, Wrexham’s former training ground, after a history that includes about 5 other former homes. The Mold Road, to the east of Stansty Park, is chocka with cars going after some League One action. Indeed today, the city teems with Luton fans on a promotion high and, therefore, a high police presence. I expect few know, or care, that there’s another game in town. 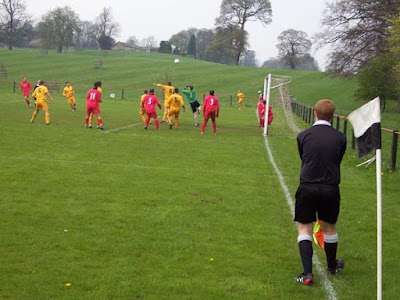 Considering the apathy with which the League of Wales is met even within the principality, one can only imagine the lack of interest in its feeder leagues. The current Cymru Alliance champions are Airbus UK, which may give you an idea.

Indeed, todays attendance is gaugable from a good old-time headcount, although if you take out club officials and family members (my count includes 4 kids whose fathers are involved), the attendance may well be countable on the fingers of one finger. When I ask the old boy, who remains diligently on the gate until half-time, how much it is to get in, it is all he can do to stay on his feet.

It’s a shame more people don’t see the pleasure to be had from football at this level, but I understand it. The applause of a few relatives will not make the hair stand up on your neck, as a neutral, as several thousand singing as one can. It’s not a better atmosphere though, just different. The honesty of the really lower leagues (i.e. those which aren’t pro or semi-pro) is, I think, best espoused by the advert below which takes up a whole page in the Lex 12-page programme. An advert that will, at best, be seen by about 20 people, most of whom will already know the fodder score. By my calculation earlier then, this is an advert just…for…ME! 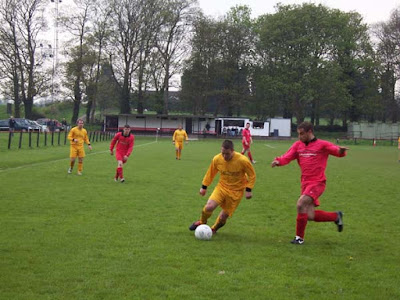 I don’t usually bother with programmes but with a 2 quid entrance fee, it’s hard to balk at an extra 50p for the matchday magazine, when offered one by an ageing gateman steadying himself against a fence.

Prior to the game, it looks like being a one sided contest as Cemaes foot the table with the ominous asterisk against their name. 3 points deducted, which you could cope with if you hadn’t only won just once all season, so with that neutralised, they only have two draw points to show for 31 games. A 26 point gap to second from bottom Mold Alexandra and a trifling goal difference of –114, suggest their pre-match warm-up is more out of ritual than desire.

Despite pressure at the start of both halves, Cemaes are railroaded for 6 goals in the following minutes – 13, 20, 23, 45, 70 and 73. That’s according to the Skiffoid watch anyway. No PA announcements here. Indeed no PA. Or floodlights. Apart from the single pylon pointed at the car-park.

Of the goals, the best and worst of this level is on show. Lex’s 3rd is an own-goal which bobbles off two bumbling un-exercised thighs into the net, while their 6th is a deft free-kick lift over the wall for an attacker to chase round the lumbering defence to easily head-home. Lex also blast a penalty over the bar.

Cemaes do provide some light relief for themselves just prior to the whistle at the end of each period. A burly defender puts the ball in the back of the next before half-time, with a blatant hand of god effort which, of course, is disallowed, but the ref keeps the yellow in his pocket as reward for the sheer cheek. They finally get their consolation just before the end, but they look like a team used to shipping goals. It is surprising to learn that only decade ago that they were keeping their heads above water in the League of Wales.

All credit to Cemaes though for sticking with it and seeing the campaign through. Only one more week, and they can regroup for 2005/06.

Christ, aren't these seasons passing all too quickly.
Posted by skif at 5:00 pm

Another excellent Monday morning read. Hobo Tread is one of the first blogs that I head for after a weekend of ground hopping and has inspired me to keep a online record of the stadiums that I visit.

That advert from the programme really is inspired...

Chevblue: welcome, nice to hear from you - I'll bang a link up to your blog today

Ben: It's nice isn't it. Thoughtful of 'em. Although I don't think the scan flatters the ladies there.

Many thanks for the link. BTW you may be interested in the fund raising efforts of two Stafford Rangers fans who plan to visit 158 grounds in the space of 7 days starting on June 11th. Details here .... http://www.158groundsin1week.co.uk/

funnily enough before I read that, I noticed it on your site and have supplied a comment saying I've nicked it.

So thanks for offering it!!!

No problem. I suspect the link may get better exposure here!