My record this season really is shocking.

I've seen 7 games so far this season, 5 of which have ended in defeat. Our boys record since hitting the bottom of the table on February 12th has been 8 wins and just 2 defeats in 12 league games. Needless to say I've been in attendance at both the defeats. 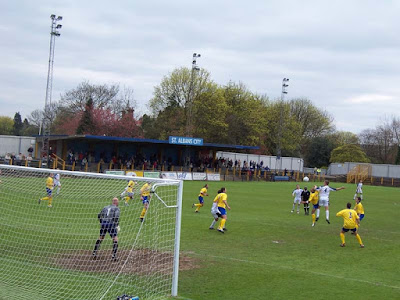 It is getting to the point where I am being viewed as a spectre of doom by my fellow H&W fans. However I would point to the fact that I have seen a win, and it were a comprehensive one.

In fairness to our boys though, we were minus a Dean Holdsworth (flu) without whose goals, this season may well have dipped below crisis to utter disaster. Our gaffer also didn't appear to be in the vacinity (business commitments apparently), so Shaun Gale took charge on the bench. 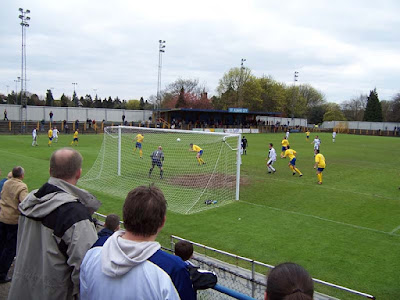 Also, after securing Conference South survival last week with a 4-1 win over early season pace-setters (before the money ran out) Hornchurch, this was a very much post-Lord-Mayors performance, with the defence falling asleep on 3 occasions to gift Stalebuns their goals.

Super Jimmy Taylor scored what was an equaliser in the 56th minute (continuing his family's good sporting day - brother Billy having taken 6-45 to bowl Hampshire to victory over Gloucestershire in the County Championship), and it looked up to that point that we could go on and win, but all game there was virtually no way past St. Albans experienced keeper Paul Bastock, who made several excellent saves. St Albans made the most of their opportunities. Fair enough, really. 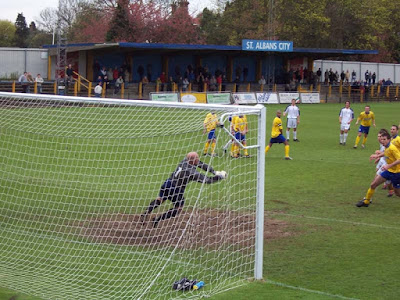 I can never report objectively on H&W games, so apologies again for the lack of usual effort. But I'm grumpy after travelling all that way to watch a team shrug a collective 'meh' in the face of an eager St. Albans team. We were safe and, now, so are they.

So we have 2 more games, home to relegation threatened Margate, and finally away to Grays, which I will be attending. Considering the latter are already champions and the only professional team in Conference South, and we seem content to rest on our safety laurels, I can't see my record improving.

Hopefully, we'll up the stakes to see out a disappointing season in some sort of style.
Posted by skif at 5:46 pm

Dean Holdsworth? Not the ex-Bolton forward surely- to-goodness? He must be about 90! What other forgotten goalscorers of yesteryear you got down there at Havant? Cyrille Regis? Alfredo Di Stefano?? Dixie Dean??? I demand to know!

In recent seasons we've had..

Holdsworth and his sparkling teeth here

Well Liam Daish is not quite Alfredo di Stefano but that's quite a line-up all the same- I suppose the south coast is well-known as a quiet place to retire to, for stars of the Premiership as well as bank managers and the like...

Certainly the sea air seems to be doing old Dean the power of good there- he doesn't look a day over 75, and his teeth look a good deal newer.

Thank you so much for mentioning Billy Taylor's wonderful bowling figures ... grr. Maybe Cheltenham in August won't suit him so well! All those "big names" brought in by Hampshire, and good ole' Billy Taylor steals the show! Made my day complete: H&W lose, Saints lose, Gloucestershire lose ... OK Bristol City won, but it's probably a bit late for the play-offs now.

Although Warne's motivational contribution can not be understated!