In the trams that spirit through their Nottinghamshire trail, a very handy guide is available showing pictures of the various attractions at each stop en route. Hucknall is afforded 3: St Mary Magdalene Church; Lord Byron; and one other. It appears that aside from the Church (the site of Byron’s last resting place), Hucknall is notable for it’s Tesco. It seems fair to say that most journeys do not end in Hucknall. Apart from this one of course, which takes in all of Hucknall’s most treasured landmarks.

Thankfully, the civic pride of Hucknall folks does not rest at the doors of their supermarket, but they seem keen to play up and bask in the glow of their poetic association. Round the corner from their Tescian icon is the Cineplex, which is also home to…BYRON BINGO. One can only hope the callers up their ante in keeping. “The harp the monarch minstrel swept, the King of men, the loved of Heaven. Thhhhiiiiiiiiirty-seven”.

There’s a Byron Carpets as well, and the leaflet referenced above suggests that Byron lives on in Nottinghamshire through the renaming of Tram 205. Not, then, through his body of work or reputation. It is nice to know though that a fairly sleepy Notts village can get so firmly behind a cross-dressing sex-hound with a club foot.

Hucknall is currently also getting attention for their football team, winners of the Unibond league last April in it’s last season as a direct Conference National feeder, but unable to take promotion due to the standard of their ground. They are now in Conference North and today is the second leg of an FA Trophy semi-final with Bishop’s Stortford from the Southern equivalent. They lead 2-1 from the first leg at Stortford, and this represents a golden opportunity to get to the Villa Park final. With Grays of Stortford’s league leading 5-0 from the first leg against the National’s Burton Albion, it is almost certain that yet another final of the non-league’s major cup competition would be contested without any representation from it’s pinnacle leagues.

The Trophy in recent years has been less of a draw for Conference National teams, especially now with the end of the season play-off tussle weighing heavy on their minds. As such 3 of the last 4 years have seen the Trophy winners come from the Northern, Isthmian and Southern leagues.

Walking from Byron’s grave to the ground, my heart sinks as I see SOLD OUT signs on the boards. Having spent a fair bit getting to the game and travelling for several hours by bus, train and tram, it looked as though my day was coming to a premature end, which would have been gutting. Seeing a chap coming out of the club offices, I explained my situation, about where I had come from and asked ‘can you help me out?’. A succession of officials were consulted until one produced the golden ticket from his pocket. Charlie Bucket action. Phew. Thanks to all concerned at Hucknall for sorting it. Would have been a very long trip home otherwise. 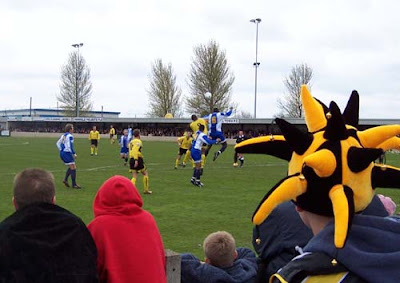 Inside the ground there appears ample space, but with exits not plentiful, the fire regs have kept capacity below 1,900 (officially, wink wink). It is for this reason and the fact that it’s mostly flat standing all round that promotion was denied to them last summer.

The Hucknall fans are not overly vocal and Bishop’s Stortford have brought as many as could be shoehorned into the far corner, and are in good voice. Do not assume that the rest were all glory-hunting locals though, there is a Hucknall hardcore, the extent of which is best summed up by one bald-shaven gent with a large Hucknall crest tattooed onto the side of his head. An England crest adorns the other side. A learned soul, we might deduce. 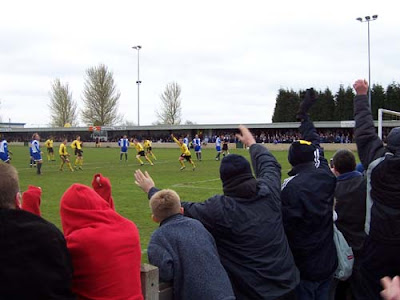 Early in the game, Hucknall stretch their aggregate lead to 3-1 making the most of their early domination. After 32 minutes, they increase it further thanks to Roy Hunter’s spot-kick (seen in celebration above). Disgruntled Bishop’s fans take it out on Hucknall’s ground, chiming out that it’s shit, and Hucknall have no fans. Sulky playground stuff. The chap next to me mutters “Shit ground? Probably is…err.. wi’ that”, which is probably the worst comeback in the entire history of the rejoinder. He makes amends though by responding to shouts of “cheat, cheat, cheat” from the away section with a spirited “Cheat? Me ahse’ole”.

The Bishop’s players don’t take it lying down though and score, tantalizingly, just prior to half-time, adding a second after an hour. This goal features a wonderful comedy of errors where both attacker and keeper brick it in the face of a 50:50 1-on-1, the ball managing to trickle between the keepers legs allowing Duane Jackman to nip round and equalise (on the day). Just one more needed to take it to extra-time.

After a couple of scares from Stortford free-kicks, another goal occurs, but it is the sealant for Hucknall’s deserved victory, a scramble sees the ball cleared from the line, but the linesman indicates that this was not before it had crossed it. Bishop’s Stortford were deflated completely from this single blow and Hucknall faced no further danger before the final whistle brought scenes of jubilation, albeit far from intense. It may be said that since Wembley was knocked down, a certain amount of prestige that comes with reaching the Trophy final has been lost. 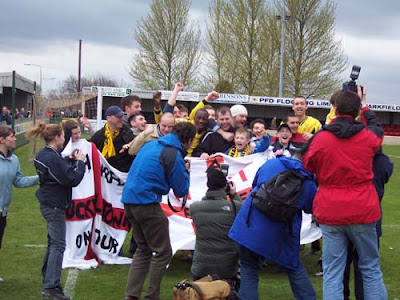 Nevertheless, it was a fantastic cup-tie. Probably loved it a lot more for the fact that it so nearly could have happened without me. After Havant & Waterlooville’s gutting loss to Tamworth in our 2003 Trophy semi-final tussles, it was nice to leave one of these ties feeling pretty good about life. The news by text express that we’d slain Hornchurch 4-1 at West Leigh Park to realistically guarantee safety put an even bigger spring in my step. Next year, the play-offs!!!!

Warning! Do not go on a diet before reading this information. To learn more please visit Weight Loss