To cut a long story short, a Merseyrail strike timed to hit their bosses in the wallet on Grand National weekend, a lack of time to adequately get to grips with the Liverpool – Chester bus situation and a significant wrong turning on my part mean that the first 20 minutes of this game are a total mystery to me, although the gateman informs me that their have been no goals. Later on, an hour and a half wait in the bitter cold at Chester bus station caps a fine day. A regular public transport user should expect the odd day like this though. Anyway, back to Airbus UK. One of their vehicles might have done the trick and got me home before one in the morning. Sigh.

I touched on this issue a few weeks back when visiting Vauxhall Motors, but who follows a team like Airbus UK, and how in Christ’s name have they wound up in the top flight of Welsh football? Mark E. Smith once said of his band, ‘if it’s me and yer Granny on bongos, it’s The Fall’ but he could easily have been talking about what constitutes the backbone of a mid-table League of Wales side. I speak as someone with a fondness for this competition, you understand.

As it goes it would appear that while Bangor have brought a fair few, those that are supporting Airbus have some affiliation with the works social club to which the pitch is attached. I base this on one chap discussing a colleagues retirement party with some others around him, so results are far from conclusive. Indeed, there are kids here, so perhaps the Airbus support is made up from masochistic Chester and Wrexham fans seeking an extra dose of punishment the nights before their main event. 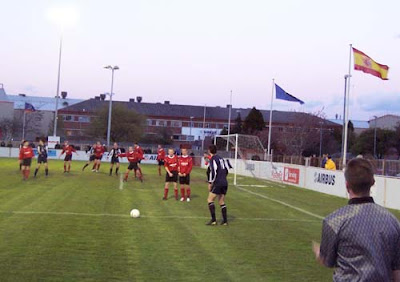 Certainly it would be difficult to build up any kind of identity away from the works when the transient skins of de Havillands, Hawker Siddley, British Aerospace and Bae Systems have been shed to leave the Airbus UK handle. It probably didn’t help having to play the first part of the season way down the road in Conwy so their ground could be brought up to speed either. Furthermore this is a club that is technically in Wales but is in the middle of nowhere on the outskirts of Chester. Border country, my friends, bring a burning torch and have your wits about you. Aside from this, finding good quality information about Airbus UK FC is about as complicated as capturing the Ark of the Covenant, possibly more so. This is the exclusive restaurant of football. Entry by association or secret handshake. £5 if they consider you intrepid enough.

All this makes the likelihood of passion and chanting on the terraces very remote. It is non-existent, and reduces the Bangor faithful to a series of murmurs. Then again they were a bit like that at home.

Indeed, when the hooter sounds for the 9pm shift to end, the workers stroll and drive en masse past the end of the ground. A few take advantage of the now wide open gate to take in some free Premier League action, but generally leave within a minute or two. One chap informs me that he wants Bangor to lose as he follows Rhyl. It is clear then than Airbus’ unlikely survival after one season in the Welsh top-flight is not something that particularly troubles their workforce. However the second half shows clearly that the players will fight tooth and nail til the last.

What I see of the first half is not much to write home about as the bitterly cold wind flies from one end to the other fairly unobstructed given the wide openness of ‘The Airfield’ ground. Quite what it was like before it was ‘brought up to League of Wales standard’ is anybody’s guess, as it’s spartan to say the least. 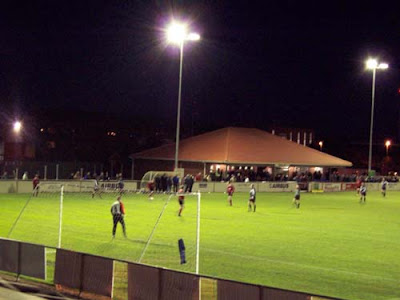 Come the second period and Bangor’s domination verges on the embarrassing. A possession pie-chart would show Airbus’ contribution to proceedings as less of a thin slice, more a linear lesion in Bangor’s otherwise perfect circle. One way traffic but ultimately a pile-up with no-one really getting anywhere as Airbus threw themselves in the way of shots and crosses as though spurred on by a crowd of thousands.

Towards the end, Bangor were awarded a soft penalty, which led to Airbus defender Hopkins screaming repeatedly at the ref that he was a ‘fucking cheating twat’. The penalty curves up and above the diving keeper but hits the underside of the bar bounces down and out. When finally the ball leaves play the ref calls Hopkins over sternly. That only a yellow card is shown probably shocks even the recipient.

0-0 then, with the second half just about making up for the pointlessness (and absenteeism) of the first.
Posted by skif at 5:19 pm