Talk of Coventry and people might give you 2-tone or Lady Godiva, but more often than not it is a place given to synonymy with the drab and unexciting. This city, after all, was razed to the ground by a German air raid in 1940, and some seem to conclude that it has recovered itself from this devastation only in terms of practicality rather than aesthetically.

First impressions mean a lot certainly; sunshine always adds 25% to any place and it soaks the town today, but I do not see a greyness, as had been the impressions. I see a fairly typical town centre with bursts of architectural flourish. Upon hitting the inner sanctum of Coventry walled in by ring roads, the base of Hertford Street offers up an interactive fountain and some understated sculpture. Further up, an arcade is gently canopied. It appears they like the feel of it as more ostentatious swoop of covering is umbrella-d over a bronze likeness of Coventry’s favourite historical nude on horseback lines the entrance to the seemingly new ‘Cathedral Lanes’ shopping centre. 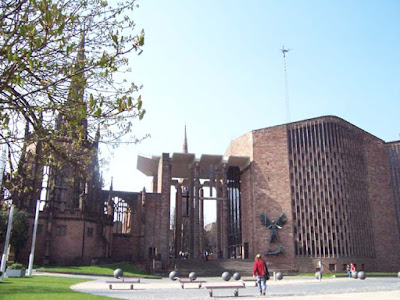 As one might expect this backs onto the Cathedral itself, craning its relative modernity over the well-preserved shell of it’s bombed out predecessor. It may have no roof, but the gigantic tower is a striking symbol of the will of the Coventry people after the Nazi strike.

Tapping at it’s shoulder is the less grandiose Holy Trinity Church, but if there is any religious point to be made concerning the relative sizes of the houses of worship, my agnosticism keeps me from trying to find it. All I will say is all 3, Catholic, Protestant and ruin should fill the people of Coventry, of whatever hue or none, with local pride.

Their football team this season though is not managing to cause any chests to be puffed as they flirt with relegation to League One. After hanging around the top-flight for far longer than expected, Coventry have struggled to make any significant impression on what we now call ‘The Championship’, and attempts to leave it now appear more likely to involve a trapdoor than a stairway to heaven. Today’s opponents Brighton & Hove Albion are in a similar position to Coventry, and so six-pointer ensues at Highfield Road. 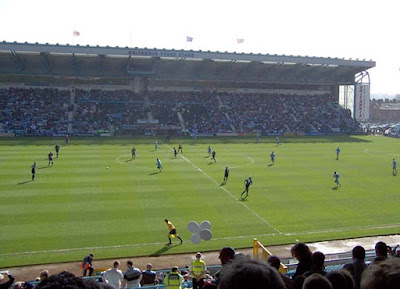 Coventry’s ground is pretty smart, but for a fan of the bits and pieces at football grounds, there isn’t much to hold the interest. Not many nooks and barely a cranny. What Coventry do have in their favour is a tannoy announcer with an unfeasibly deep growl. It is as though ‘no racist chanting, no foul or abusive language’ were describing the plot of a forthcoming Hollywood cash-cow. I’d imagine the gravely verses of Robbie Robertson’s ‘Somewhere Down The Crazy River’ would be his karaoke choice. He may be more of a Waits man though. I am also grateful to him for imparting the surprising information that not only is Steve Staunton still alive, but playing today as well.

With regards the stadium, Coventry will soon leave behind Highfield Road for a new arena, so League One would certainly not be ideal next year, when it comes to trying to fill 30,000 seats. I imagine though that the Brighton fans, out in force today and in excellent voice, must look upon Coventry’s forthcoming move with some jealousy while their attempts to leave behind the ramshackle and largely unsuitable Withdean athletics track for a new ground are consistently thwarted by NIMBY’s and the ODPM. It is perhaps unsurprising with these distractions that Brighton can’t get a firm grip on their Championship status.

Brighton probably had the best of the first half as an offside flag spared Coventry keeper Luke Steele’s blushes as his half a palm only manages to guide a shot into the corner of the net. He was almost embarrassed earlier on when getting into backpass confusion with defender Duffy which resulted in a Brighton free-kick within the area. The angle was acute though and the shot was blasted into the side-netting. 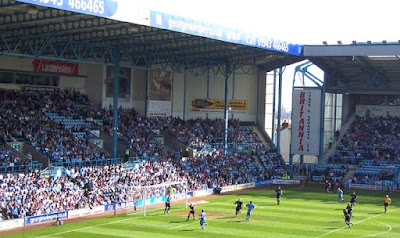 At the beginning of the second half Cov took the initiative, and were soon awarded a penalty, albeit a very soft one, for Guy Butters tug of an attacking shirt. Gary McSheffrey curved it strongly upwards to the roof of the onion. Within quarter of an hour though Brighton equalised thanks to Adam Virgo locking onto an excellent through ball and outpaced the Coventry defence to slot the ball home.

A draw would not be ideal for either side but Coventry looked the more likely and so it was, after a deft 1-2, Steve Staunton, never a prolific poacher, curled a left foot peach deftly off the post from 20 yards out to win the game. Alive, and very well! Highfield Road erupts as they do again ten minutes later, after some close calls in front of goal as Brighton searching in vain for the equaliser, when the ref calls time. Hairs on the back of your neck stuff.

Should Cov stave off relegation by a point or two, I’m sure the unpretentious Irishman will dine out for sometime on today’s uplifting winner.
Posted by skif at 8:43 pm

Went to Highfield Road several years ago to watch Newcastle - the game when Shay Given didn't look behind him, and Dion Dublin nipped in to score.

Do they still print chants in the programme?

My finances don't allow me to buy programmes. Also ground-hopper AND programme collector would surely have me reaching for the gun!

In any case, I doubt they were singing from the same hymn sheet as there wasn't much coming from the Cov fans.

Brighton lost the game but won the singing by a knockout in the early rounds.