Hobo Tread prides itself on offering a relatively unbiased sketch of the grounds, supporters and games. Of course, when it comes to Havant & Waterlooville, I cannot pretend I can offer the same ethical service.

I love going home at Easter, as this allows games at home and away in a short space of time before I have to wind my way back to Liverpool and the working life. 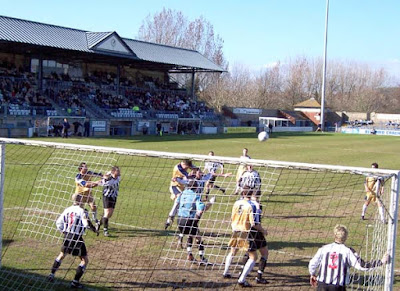 Now, I've been to Dorchester Town twice before, but it's a very tidy ground, built fairly recently (1990) with a great deal of architectural input from Prince Charles (being that it was built on land owned by the Duchy of Cornwall). Tesco took over the original ground and a superstore sits right next to the new stadium, but a new ground for Dorch was part of the deal, and they've done well out of it. I particularly like the twin 'towers', if you will, of their turnstiles.

Dorch is always favoured by Havant & Waterlooville fans for having massive beano potential, while not being as reviled by H&W fans as their near neighbours Weymouth. As such around 100 Hawks made the Good Friday trip along the coast. 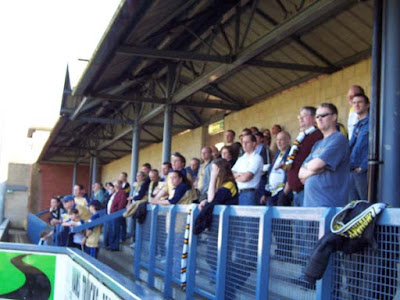 I came to the game having seen 5 H&W games previously this season, 4 of which were defeats, the other a draw, but I came to his with my beloved club on a run of 7 games unbeaten, including 6 wins. Needless to say I kept my status as the bastard exile Jonah, as the Hawks succumbed to an 87th minute winner following our equaliser two minutes prior. They came at us with the long ball game, and it worked. 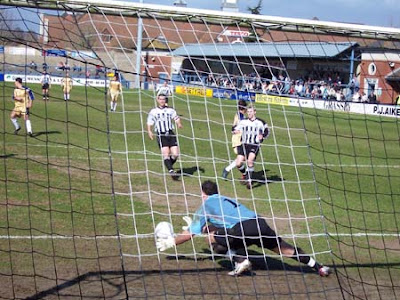 Thankfully, we had a chance to get back on track just 3 days later on Easter Monday as Carshalton Athletic, another side in form but still looking over their shoulders at the relegation shake-up, visited WLP. 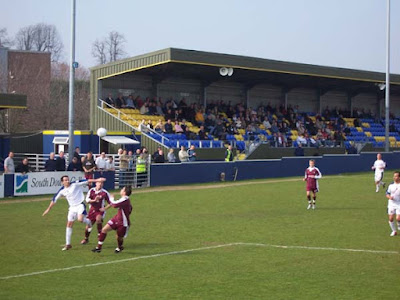 I said before in my last missives from Havant that I really love our ground. You might expect that but when I first started following the club it was a flea pit of a place, but looks beautiful now (to my conception of a football ground anyway). Felt great to be back and with a smattering of sun on the place. Breathe it in - this is my Mecca! 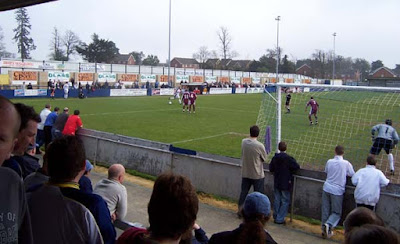 We took the game straight to them, with plenty of chances, long-time terrace hero 'Super' Jimmy Taylor giving it his best guppy in the pic below, as the ball sails wide of the post. Although they made our keeper Gareth Howells work, making several quality saves during the course of the match. 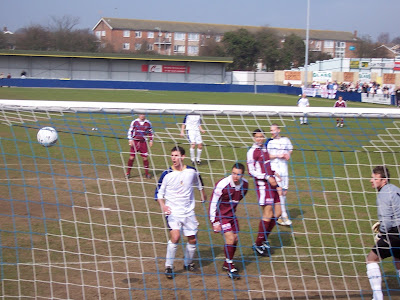 1-0 up at half-time, thanks to Dean Holdsworth's penalty (see below) things got a lot more comfortable in the second half as they fell apart at the back. Didn't help that they had a player sent off, but we'd taken control by then. 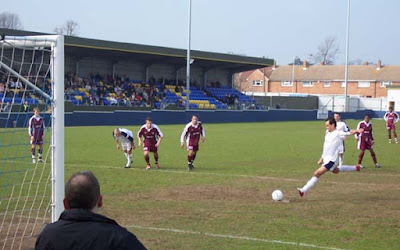 After their player was tunneled, their number 5 tried his best to get 'Supes' Taylor sent off by screaming and wriggling around like a loon. This made him an object of terrace derision for the remaining half hour or so, and rightly so (see what I mean about bias). Our centre-half Neil Sharp popped up with a couple of goals, the second one of the softest trickles over the line you'll see from a set-piece/header. This was bookended by Dean Holdsworth's second, which he can be seen celebrating with Jamie Campbell and Peter Fear in the pic below. 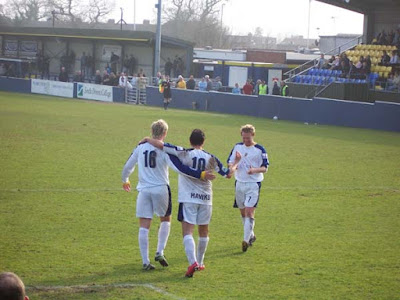 This wasn't half as good as the celebration of the penalty though. Responding to regular taunts from the crowd about the blinding whiteness of his teeth, he stood proudly in the back of the net pointing gleefully at his ivories. Hero!

Anyway, my first Hawk win of the season and the curse has been beaten! Hurrah. Two more Hawk fixtures for me before the season is out, hopefully they will be as joyful as this one, with a result leaning more towards this than the Dorchy effort.

p.s. apologies for the rushed nature of this report, not up to standard, but I is a busy chap. Hopefully normal service resumed next week.
Posted by skif at 10:40 pm