Been trying to time my visit to the JJB Stadium just right, and with a final day that could see promotion or a heartbreaking fall at the last hurdle into the play-off lottery, this seemed like the ideal. Especially so when you consider that Wigan almost had to play their final home fixtures behind closed doors due to a financial spat with the Greater Manc plod. The atmosphere for this game would certainly have been a touch different as the JJB was, understandably, much fuller than usual. Twice as many here as had been for their clash with Brighton back in August, for example. However there are still wide open spaces either side of the Reading following, despite it being advertised as sold out (safety issues with the fuzz again, it turns out) forcing urchins to hold up signs pleading for spare tickets outside.

Wigan are well known for not doing great business with regards the football team. The Warriors rugby league side with whom they share their home put more bums on the JJB seats. Today though the town seems to be at a standstill in preparation for the biggest game in their history. Perhaps Wigan needs to be shutdown for the JJB to see an attendance their on-field successes have merited this season. The centre is deserted, aside from just two open shops: GAME and Gamestation. Perhaps then the people of Wigan are not missing in football-related action, rather they are all at home hunched over arched, addicted thumbs worn of their opposability. Or maybe Sunday trading just hasn’t arrived here yet. Time for some excitement then, and Wiganers know exactly where that can be found at today.

Certainly the football club are pulling out all the stops to whip up their punters (some old, some new, some borrowed, some probably red) into a frenzy. As I walk in, it becomes apparent that they have dug up the Drifters, the combination of a swirling wind and instinct keeping their legs swaying in unison down on the pitch. It may well have been a tribute act, but either way they cause a notable crowd reaction, which seems to highlight the newness of the football experience to some in the Wigan stands. Rather than launching Styrofoam tea-cups, rather uselessly, in their direction, or drowning out their croons with boos, a version of ‘Saturday Night At The Movies’ (albeit in scuzzy lo-fi form thanks to the farty PA) causes that kind of regimented in-time clapping usually only seen in those holding studio audience tickets for the Generation Game.

As the Drifters drift, the announcer, rather presumptuously, screams “90 minutes from the Premiership”. Before that payday, though, they are keen to borrow a tenor, as Lawrence Robinson booms out ‘Nessun Dorma’ for which the PA seems better suited than 4-part harmony. Thankfully normal footballing order is relatively restored as he is largely drowned out by both sets of fans in full chant. Sadly not “We all agree. Puccini is better than Wagner” though.

Nonetheless, everyone quietens down to allow him his moment of vocal glory on its Sturm und Drang creschendo, and give him warm applause. All well and good to get a bit of class and culture into these situations but if he’d come out in suit and boot and launched straight into leading the crowd in operatic style through the “dee do do dee do”’s of ‘Tom Hark’, THAT would have been really impressive.

Still, it’s just another distraction when both sets of fans want the game to start. It’s not just about Wigan getting an easy win to get them promotion (as the announcer would seem to have it), but Reading needing to win to stop West Ham taking the last play-off place from them. 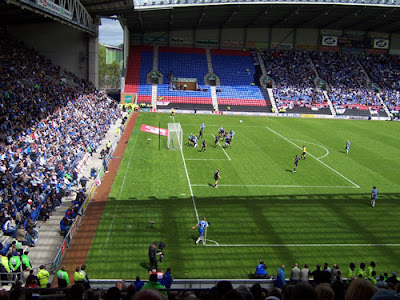 The news soon comes through that Ipswich, Wigan’s rivals for the second promotion spot, have taken a lead. This is relayed to the crowd through a helpful Reading chant of ‘1-0 to the Ipswich Town’ in a fine example of ‘let’s try and motivate the opposition’ crass thickery. That Brighton equalise not long after is less apparent, but it soon becomes immaterial as Wigan score 2 in 2 electrifying minutes deflating Reading and essentially killing the game as a spectacle, certainly for the remainder of the first half.

The second half didn’t see Reading do anything that warranted anything other than second tier football next year and eventually Nathan Ellington finished it off in the 85th, the cross for his header seeming like TV movie slo-mo. A thousand 80’s soft-rock incidentals are composed in those stretched out seconds and, although Reading knock in a consolation in injury time, the Wigan celebrations were given license to begin. Over and over again as the match approaches climax the tannoy announcer implores the crowd that they should not come on the pitch. A sizeable amount of Wigan’s over-excited support take that as a wager and stream onward once the ref sounds his three promotion party parps. 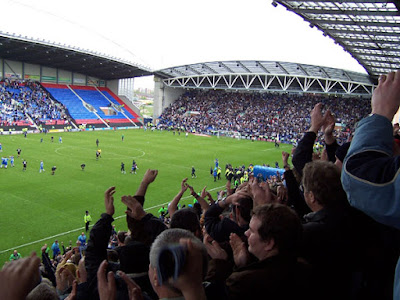 It is perhaps understandable that Wigan’s more senior support will not quite believe all this, after all it is only 27 years since Wigan were elected to the Football League despite finishing second to Boston United in the Northern Premier. A chap behind me says to his companion that he had watched Wigan in their non-league days. He might well have also seen the Sex Pistols at the 100 Club, and a vision of Jesus in his bath towel, but no doubt there are a good many that have experienced the whole journey, and he may well be one. It is to them that this promotion should be dedicated, the heart and soul of the club from when they were semi-professional minnows, not just their sugar daddy Dave Whelan, although his contribution cannot be understated.

Indeed, some may say that Wigan is not a footballing town, that they don’t have the support to justify the step up, that they are not ‘big’ enough for the Premier League, but attendance figures don’t win you promotions and why shouldn’t a team with a smaller hardcore taste success? It seems as though sometimes that the attitude is that the bigger teams must have a better and more passionate support when in fact they will, by the very nature of their successes and excesses, have more fair-weather limpets than most. 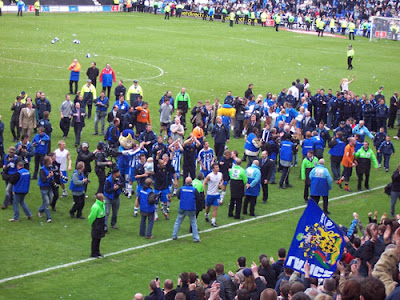 Indeed, it is great when teams like Portsmouth, Birmingham, Charlton and Bolton come up and hang around despite not being particularly fashionable and yet, certainly in the case of Bolton, really making a fist of it and cementing their place amongst the old money.

Fact is, Wigan have been an attacking force to be admired, as the Roberts/Ellington partnership bearing 45 combined fruits has proven. They will no doubt find life tough with the big spenders but their positive play will be a welcome addition to the top division, a breath of fresh air in the face of increasing Premiership predictability (see the latest When Saturday Comes for an excellent editorial on this subject). Furthermore, in Paul Jewell they have a canny young manager who has had to do all this scrappy underdog business in the big league before with Bradford.

One of the great moments in the last 10 years in the Premiership has to be Bradford beating Liverpool on the final day in 1999/2000 to claw onto top-flight status. Okay so they went into financial meltdown in the process and only got one more year for their trouble (and it may be significant that Jewell had left after keeping them up due to a rift with the chairman), but lessons can be learnt from it, and no doubt Dave Whelan will be looking to use his money effectively but wisely in a bid to compete.

The word 'survive' is not in their lexicon. At this stage.
Posted by skif at 10:33 pm