A few steps forward, a pivot, then a few steps back. As familiar a pattern to we Hawks fans as it is to those who regularly dance the Gay Gordons. That dance either ends with a vigorous polka or, in my case when I last danced it at a conference dinner, a pounding headache. A joyous coda, or a painful one. This season could still finish with either. Or indeed neither. It is difficult to predict with confidence what will happen from one week to the next, let alone come the spring.

The smart money at the start of the season was that this campaign would be a relatively decent one if it merely fizzled out in mid-table come April. We’re not the big spenders of the division, nor are we operating on the breadline, so the play-offs are a dream, but not one I can imagine we’ll be getting in an angry lather about should we not make it. Thus we’ll get games like this, where an uninspired team display is punished by a virtuoso effort. We may be only a couple of days into November but Ross Stearn has stencilled his name on Bath’s Player of the Month trophy already. 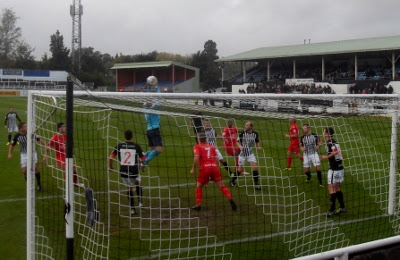 The second half was a bit ‘never-ending story’. Kicking off twenty minutes after the rest of the division due to our team coach getting caught in traffic, we then had the assistant referee go down with an injury requiring an “is there a qualified official in the house?” announcement over the PA. A volunteer was found and squeezed into a black t-shirt about two sizes too small for him, and eventually we could continue a long, cold second half that was to last 65 minutes from whistle-to-whistle. The poorly fitting clothing was certainly far from ideal given this week’s temperature drop and the late finish but the emergency lino won’t have struggled for a place to hang his winter coat. His chest would not doubt have done the job for both him and a friend.

You could argue that the linesman’s injury turned the game as much as it did his ankle ligaments, as he went down just as Sahr Kabba was scoring our very well worked equaliser. Having brought on Christian Nanetti and Sahr at half-time, it seemed to have worked wonders, with Jesse Kewley-Graham linking well with Christian before crossing to Dennis Oli who nudged expertly into Sahr’s path and he made no mistake. Why we continue to leave our leading scorer on the bench does not make much immediate sense, as we always seem a lot busier and more dangerous when Sahr is on the field.

However our downfall came at the back and in part thanks to the momentum lost after twenty minutes of idle kick about to keep warm as we waited for a new man to carry a flag. As our early second half oomph hissed to flaccidity like a bouncy castle getting into an argument with fourteen javelins and a pick-axe, Stearn upped his scoring stake from one to three in the space of five minutes. After his well-taken free-kick in the first half which took advantage of Scott Bevan’s less than perfect positioning, he hit his second after 71 minutes, an easy tap in after good work by Andy Watkins. Four minutes later, Stearn won a soft penalty and converted easily to complete his hat-trick.

When he later won the Man of the Match award, and also when he was substituted, he got a round of applause from our section of the away support. A rare privilege for an opposition player that but he had blown us away in every sense. It was certainly clear that Bath were exploiting a weakness on the right hand side. The dependable Dan Blanchett was injured so was replaced by new signing Ryan Case. In terms of the new boy’s permanent inclusion in the starting XI, it’s fair to say the Case has not yet been made.

A 3-1 defeat was about as much as our lacklustre effort deserved all told, although we had our moments in that long second period, there was nothing to really cause Bath as much alarm as Stearn had created pretty much single-handedly in us. He had been flying around like an agitated bat, and our defence had reacted like someone who had got that bat caught in their hair.

Still, it could be worse, our old striker Dean Holdsworth’s Chelmsford charges had, meanwhile, lost 0-6 at home to lowly Boreham Wood. They would have been the ideal team to face at home next weekend with Deano still in charge. Sadly, even though they are indeed our opponents at WLP next Saturday, Holdsworth has now been paid off and cleared out. Here’s hoping Chelmo’s hapless lads don’t come alive with ‘sacked manager bounce’, and we can get back to the performances like those against Maidenhead and Basingstoke a few weeks ago
Posted by skif at 1:43 pm