It’s been terrible really. Since exiting the FA Cup on Tuesday night, losing 3-2 at home to Gloucester City following the 1-1 draw away, every time I pick up my carton of orange juice and see ‘concentrate’ written on the side, my evil, cackling mind decides to add ‘on the league’ after it. He loves a bit of internal monologue banter does my ol’ brain. Git.

‘Concentrate on the league’ is the phrase with which those recently bereaved by the sadly untimely death of a cup run console themselves. For ‘themselves’ read ‘ourselves’, I’m not outside of it, I’m in it. Right now. It’s up there with ‘ah well, there’s always next year eh’ as glib clichés designed to fend off the despair that comes when you veer off the road to Wembley and thud into a beech tree.

Still, the Hawkmobile is not quite a write-off yet, but it’s fair to say it needs a panel beater to have at it. We’ve tried a number of add-ons to mask the problem, but it’s not really been working out. We’ve had so many loans on the go, we’ve been like a gambling addict trying to fend off the Child Support Agency, three sets of bailiffs and a heavy duty mush wielding a baseball bat.

What it needed was for the hand on the tiller to become a lot steadier; lately that hand has been a shaky as a wet dog on a winter’s day. Thankfully what it needed woz wot it done got. By and large, this game was handled comfortably from start to finish. Sure, Maidenhead nabbed an equaliser only five minutes after our opener, after Scott Bevan could only parry a shot out to the feet of Michael Malcolm, but there was precious little threat and we can forgive Bev a few fumbles given he’s been out injured for a month. 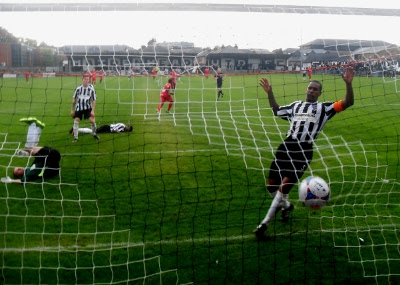 In the four games he played prior to that injury, we conceded just two goals. Since then with two young un’s wearing gloves, we’ve conceded sixteen in seven. Of course, defensive injuries and tinkering won’t have helped, but I’m much more comfortable with Scott’s experienced head in between the sticks or, as might be a more accurate description in his gargantuan case, nudging the underside of the bar.

Ed Harris and Dan Strugnell started the season as our ‘first choice’, but neither kicked off today with Harris out for six-to-eight week lay off, and Strugnell benched. Thus Ryan ‘Rhino’ Woodford and Pedro ‘Pele’ Monteiro (the latter we generally prefer to see in midfield) were found at centre. Given we’ve been critical of tinkering at the back in recent games, this was not met with universal enthusiasm but in fairness we showed more solidity here at Maidenhead than anywhere since that initial run of three clean sheets back in August.

Some streamlining has gone on in the week too with the profoundly ineffectual (or most likely uninterested) Ashley Harris sent back to Portsmouth without his supper, and Jonte Smith is back at Crawley as there’s been no real room for him to get the experience he needs with us. If we keep loaning players to sit on the bench, who will want to loan us players when we genuinely need them? SWAB THE DECKS!

You can understand why we’ve got forwards in though as our contracted striking partnership have not been at the peak of fitness thus far this season, with Sahr Kabba being substituted in the second half here to preserve him. It was a rest well earned though, as both he and Dennis Oli had superb games. We’ll come to the goals in a moment, but Sahr’s dangerosity, his fox-in’t-boxness, gathers with each game, while Dennis showed that while he may not be the most prolific goalscorer in himself, he can be a vital cog in a striking partnership.

If this fixture was anything to go by, their understanding of each other’s game is coming on leaps and bounds. Here’s hoping the experiment with one up front, both home and away, is at an end, particularly as Ryan Bird is still with us on loan and the spirited Scott Jones makes an impact whenever he comes off the bench so we’re not exactly light in terms of attacking options. 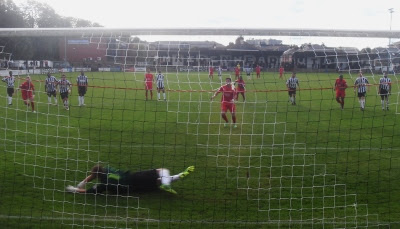 Midfield had been the bigger bone of contention especially with mercurial imp Christian Nanetti suffering from injury woes. Indeed, he had to be substituted before half time here after going down with a niggle, although appeared not to be suffering too greatly as he sauntered past us on the terrace in the second half munching his way through a whole box of Jaffa Cakes. My pal Mark scavved one off him and told me they were stale. He flies down the left wing like an eagle does our Christian, but clearly has the tastebuds of a London pigeon.

Thankfully, even without Christian’s creative influence and penalty-taking prowess in the second half, we nonetheless created a goal down ‘his’ left flank and scored a pen. Scott Jones took over on that flank after coming on at half time to replace Nic Ciardini who was having a bit of a ‘mare, and also carrying a toe injury apparently so we can perhaps give him the benefit of the doubt.

Playing more as a winger in Christian’s absence, Jonesy received the ball four minutes into the second half and barrelled towards the box at pace. With his scoring angle impeded by defensive attention, Scott instead threaded the ball to the edge of the six yard box where Sahr Kabba was on hand to stab the ball home despite a number of bodies potentially in the way [see picture one]. A good finish, but not as good as his opener, but we’ll come to that.

For now, let’s just report that our third was quite fortunate. Steve Ramsay was brought down in the area but Maidenhead’s Wada Ahmidi had got a touch on the ball. In the absence of Christian, Rambo stepped up to take on Matt Peglar in the Maidenhead goal. Now Matt was one of our two ‘reserve’ keepers last year but never played a game. He was most often seen wandering around away grounds in his tracksuit nursing a punnet of chips. It was nice to see him in action at last, especially as most of that action was picking the ball out of the net.

In fairness to Matt, he guessed the right way for Rambo’s penalty and got two hands on it. Unfortunately for him his wrists were like a recently-oiled saloon door with a six man brawl passing through it. Game over on seventy minutes, really [see picture two].

Now, it might seem a little unusual to leave the opening goal til last, but it needs some special attention really. Receiving the ball near the centre spot after twenty two minutes, Sahr got his pump on and travelled, kept on travelling, travelled a little more and having out paced the Maidenhead defence unleashed a shot from fifteen yards out that rocketed inside the near post, leaving Peglar with no chance. One of the great Hawk goals in my view, the kind that leave the body tingling, the smile extending beyond the limits of the face and the eyes ballooned. Wonderful.

So, a good afternoon out in Berkshire, with tactics and performance spot on. We shall see if this is the start of the back-to-basics, or at least back-to-what-we-woz-doin’-last season, approach which we would all very much welcome.