Last season’s trip to North Leigh covered both these aspects; away game at a lower division mob well out in the Oxfordshire sticks in waters previously uncharted by our happy Cup beano-hungry collective. Needless to say they beat us, having caught us at a low ebb during our Stuart Ritchie era; a managerial stint so short that I genuinely believe that I’ve experienced longer farts. 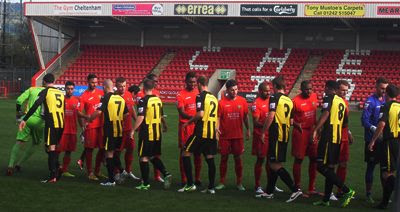 So, when the FA Cup second qualifying round draw sent us to Cheltenham to take on Town’s tenants Gloucester City, it was difficult to know what to think. Despite regionalisation at this stage of the competition, we had been sent to visit a Conference North club, betraying the almost ridiculous south-western reach of that division. A game against ‘same-level’ opposition is never ideal as when you’re going through a bit of a bad patch, one tends to think of these as particularly tough hurdles. This despite recent evidence of lower level banana skin action being altogether much worse. Like I say, pretty much every draw you get in the FA Cup has ‘DANGER’ written all over it in big red letters flickering like elderly neon tube-lighting.

Maybe we just have an inherent pessimism, like turkeys who are born cognisant and up to speed with the concept of Christmas. In the FA Cup, we have known the very best that ‘plucky non-League’ pleasure has to offer; and also the pits of ‘just didn’t want it enough’ pain. For every Notts County and Swansea, there’s been a Langney Sports or Cirencester. 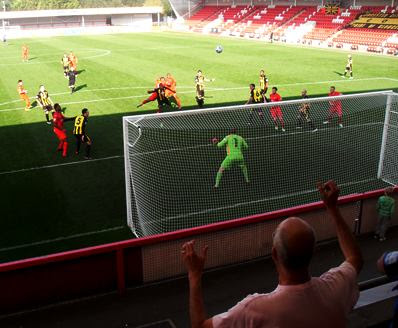 Then there’s the ‘coming into this off the back of a 5-0 home pummelling the likes of which we hope never to see again’ thing. However, I don’t wish to dwell on that as whenever I’m travelling to a second qualifying round match, one thing always remains constant. Cup fever. The silent thriller. Much as the league’s yer bread ‘n butter, a win-or-bust-(or-replay-which-will-be-win-or-bust) cup tie really focuses the mind, and stands alone from yer day-to-day trials and tribulations. There’s been many a club that have turned around their confidence levels on the basis of a Cup caper, so it’s not for taking lightly.

Being a Cup tie, some of our loan players weren’t available, and with that never-to-be-spoken-of-again defeat last weekend, some tinkering was to be expected. Reverting to 4-5-1 with neither Scott Jones nor Sahr Kabba in the starting XI was unexpected, especially with Dennis Oli being injured of late. Furthermore a new face was shoved straight in after impressing on trial in training this week; Nigel Atangara. Still any disquiet was tempered by the return of Christian Nanetti following a couple of weeks out injured. 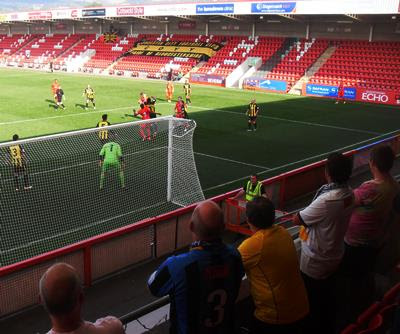 For the first half it was all fairly comfy really, a few chances but nothing to test either keeper. Lewis Hogg walloped a fierce shot just over our crossbar for Gloucester. For the second half, our collective moved to the unfamiliar position of being in the top tier of a side-on seated stand. Cheltenham’s ground was only half open to us to save on stewarding costs, not an ideal situation for anyone but Gloucester have been forced to play here due to the amount of times their ground has appeared in national newspapers with photographs of the crossbar just about coming up for air above a lake of flood water. Certainly a case of location, location, lo…*sinks below water, bubbles appear in lieu of remaining syllables* 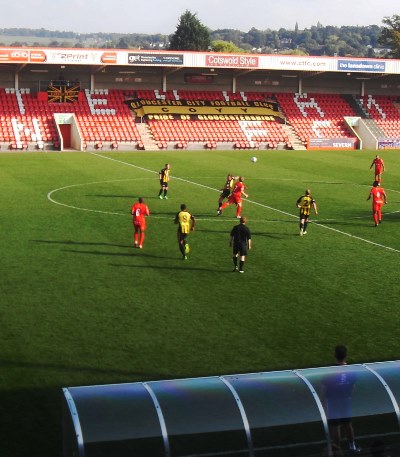 Not much water in sight today as the sun pooh-poohed October’s imminent arrival with a constant beam and just about enough heat for the coats to stay in the car. Lee Bradbury was taking no chances, stalking the technical area in a grey tank top that would not have looked out of place on a mild-mannered accountant holidaying alone in a static caravan. Shaun Gale however was still considering it shorts-on weather, happy that the hair on his legs would keep out any of the perils of the fresh autumnal breeze.

Those legs would have certainly been warmed by our goal in the 58th minute, Dennis Oli opening his account for the club after some excellent work by Christian Nanetti to take the ball into the box and slide a pass across. Oli, Oli, Oli! Oi! Oi! Oi! 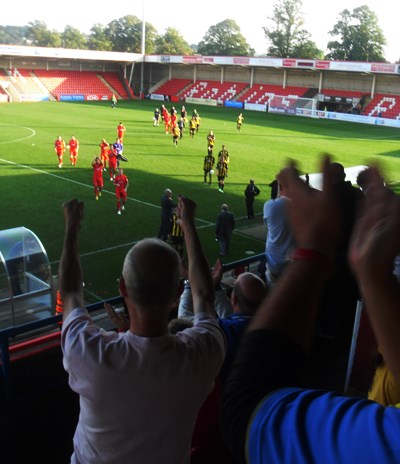 From that point on, we felt like the win was ours no trouble. Until of course they equalised ten minutes later, after which time it felt like nothing BUT trouble. A fairly route one effort, a long welt managed to travel unimpeded through our defence where Scott Wilson was on hand to run through and strike past Ross Fitzsimons with some aplomb.

After that there was action to be had at either end but Gloucester had the momentum as our midfield and defence went into shock. An attempted lob by Wilson was impeded by Fitzsimon’s face at close range, while Jake Newton had to be alert to clear away from the post. We’d have accepted a point at 3pm, probably not at 3:45, definitely not at 4:15 and very much “yes please, that’ll do ref” at 4:30. It has to be said, forcing them to travel to Westleigh Park on a Tuesday night on less than 48 hours notice is a more than decent consolation prize for missing out on a win. The Road to Wembley is by no means at an end for us.